How to make authentic Lebanese Tabouli (Tabbouleh) – this version is full of flavor, vegan, and can be made with bulgar wheat or quinoa and is infused with a hint of Lebanese 7-Spice, that truly elevates. With a video. 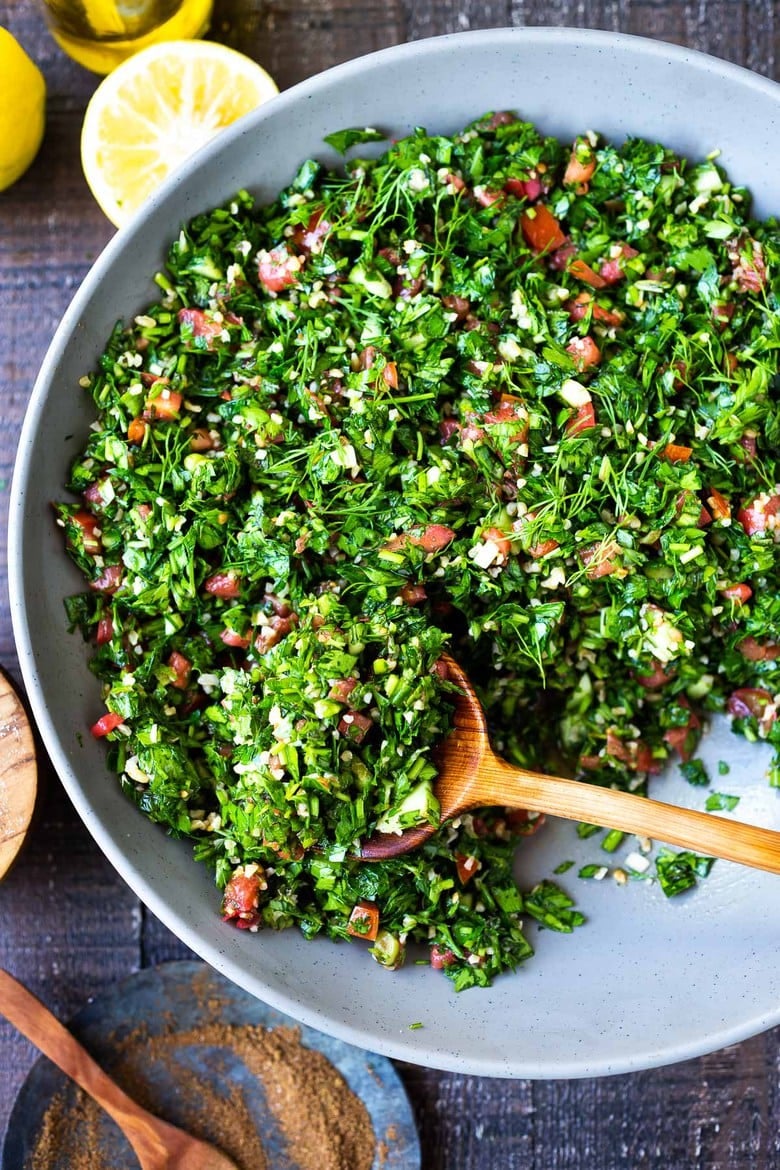 When you are sorrowful look again in your heart, and you shall see that in truth you are weeping for that which has been your delight.  Some of you say, “Joy is greater than sorrow,” and others say, “Nay, sorrow is the greater.” But I say unto you, they are inseparable.  Kahlil Gibran

When people ask me, what my favorite food is, my answer is always the same. My mother’s Tabouli. It’s been a long time coming here to the blog, mainly because I get teary every time I try to share it.  I’ve held it tightly to my heart, feeling a little protective of it. But it is time.

My Finnish mother Lea, learned how to make “real” Tabouli for my Egyptian father from a good family friend, Nadia, who was Lebanese. And of course, Nadia taught her an authentic Lebanese version, which in our household became the only version that ever mattered after that.

Tabouli was on regular rotation for the first 20 years of my existence, an oddity with most of my childhood friends who would come over for dinner.

After I moved away from home, it was the one dish I yearned for the most, and none other could compare. Every time I visited, it was my mother’s love gift to me. She would make a double batch and let me gorge and refill my stores, teasing me that I was turning green.  I can’t tell you how nourishing and healing it felt to my body- and my hope is that somehow you feel this too. 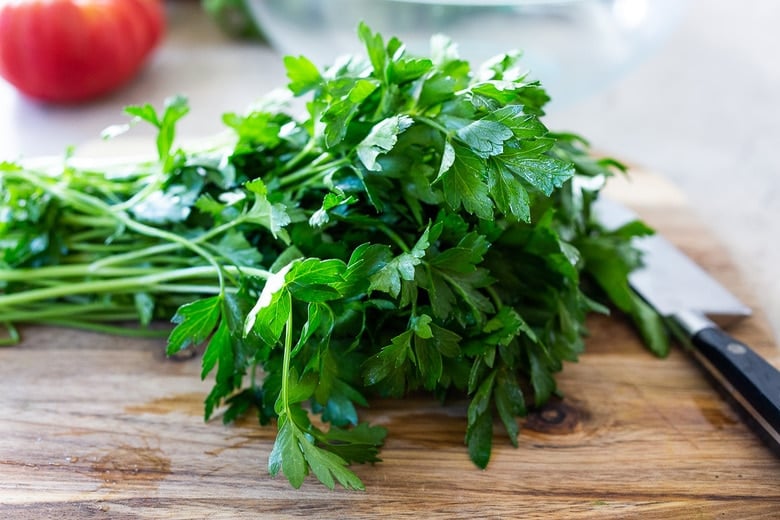 How to make the Best Tabouli: 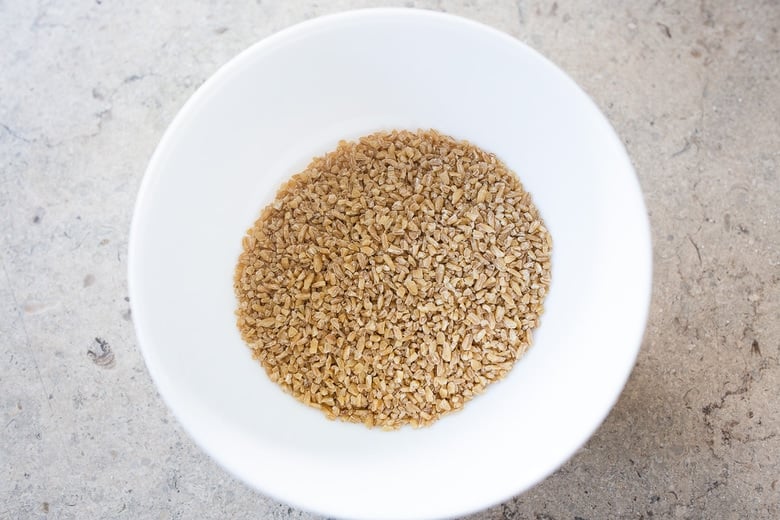 If using medium grain bulgar as you see here, soak equal parts bulgar and boiling water in a bowl, and cover with a lid while you prep the salad. If using fine grain bulgar (traditional) you can just toss it right into the salad. It will soften, but not fully cook, allowing the bulgar to soak up some of the lovely juices from the salad. 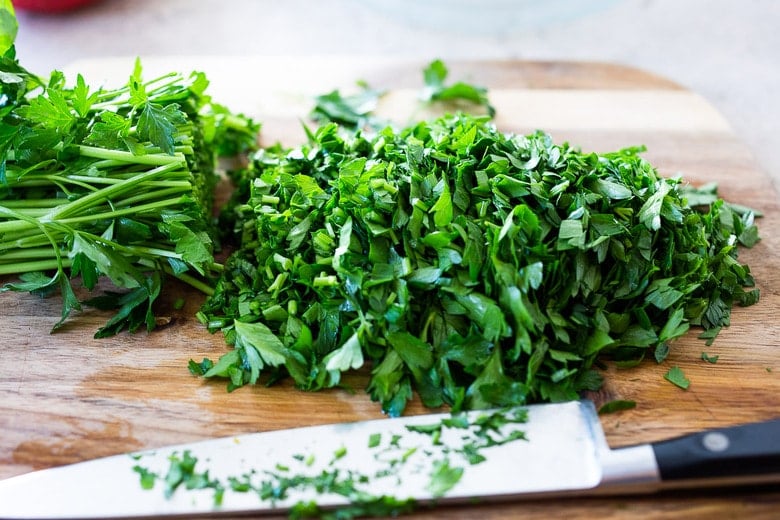 Wash whole bunches of parsley under cool running water, holding them like a bouquet of flowers, letting any grit run down the stem end. Take the washed bunches outside and fling out the water.

This is the fastest way to wash without disturbing the bunch, and then it makes cutting neat and tidy. 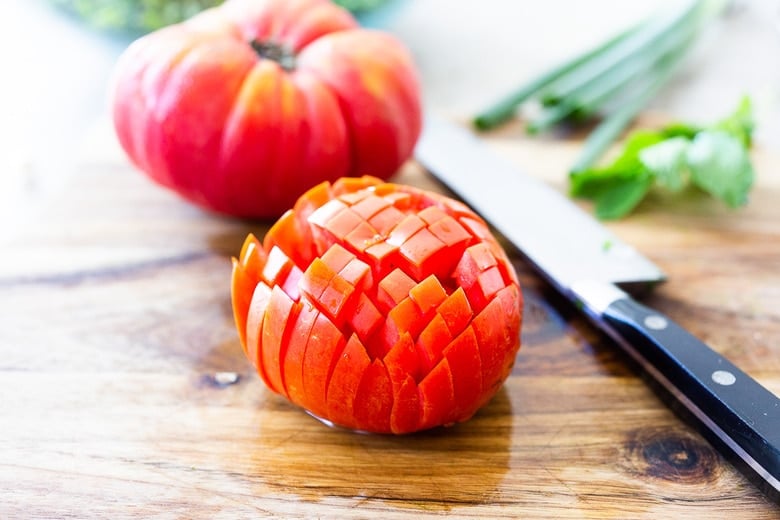 This is how my mom taught me to dice a tomato. Keep the stem side intact. Then turn it on its side and dice finely. A sharp chef knife really helps here. 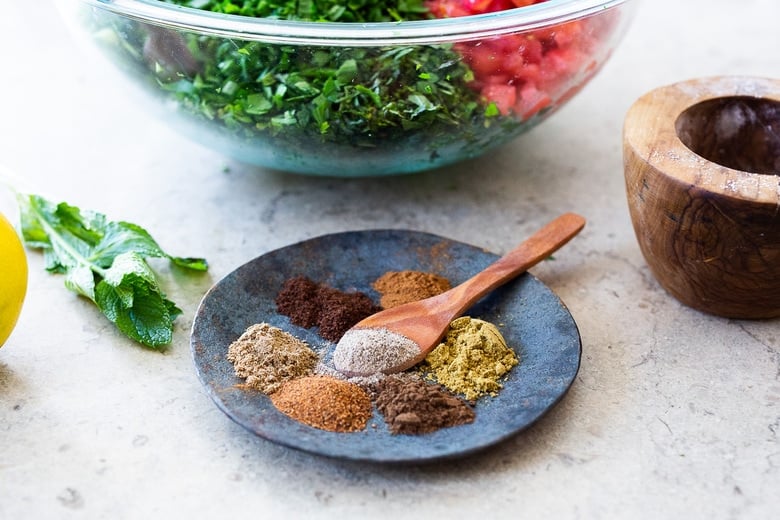 You can use whole spices, toast, and grind, or for speed, use ground spices. Or you can skip this and simply use a combo of allspice and cinnamon. This will add a beautiful, subtle flavor that will elevate your tabouli. 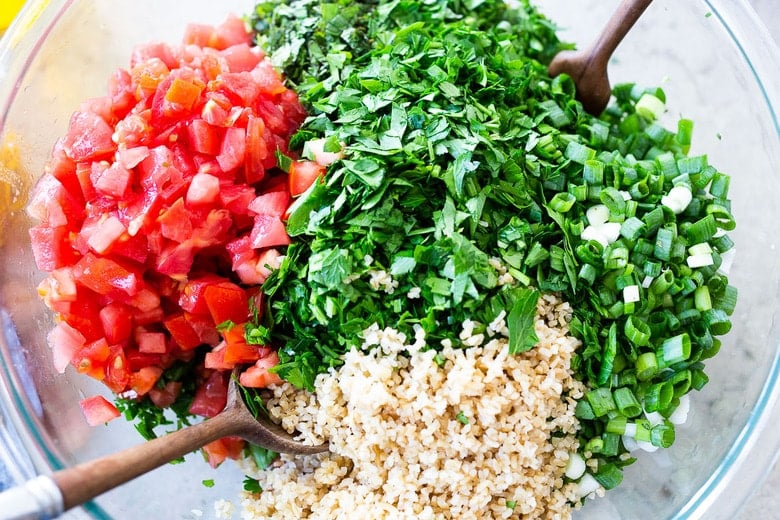 Add a Turkish cucumber if you like. It is not typical in Lebanese Tabouli but we really enjoy the texture.

Step 5: Combine and dress with salt, lemon and olive oil. 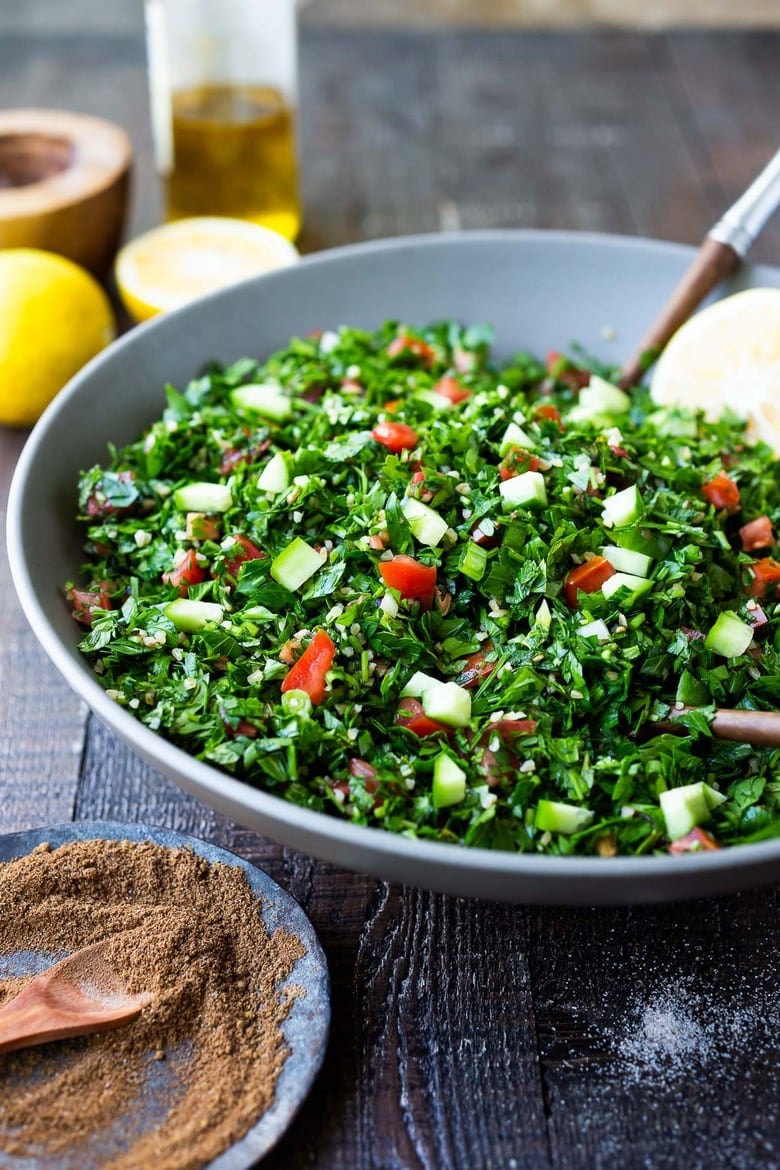 As you see, Lebanese tabouli is mostly parsley. Here I’ve only used 1/2 cup bulgar with 4 bunches of parsley ( 7 cups parsley!)

Adjust the salt and lemon until it is just right. You want it fairly lemony and slightly salty- which will both out mellow as the bulgar has a chance to soak it up a bit. Always re-taste before serving.

Let the tabouli salad sit in the fridge a good 1-2 hours before serving, allowing the bulgar to soak up the juices from the tomatoes and lemon, and the parsley to soften any lose any bitterness.

Tabouli will taste great for 3-4 days in a sealed container in the fridge!

Spoon the flavorful tabouli into warm pita bread with a slathering of baba ganoush or hummus, and a falafel!

This Tabouli recipe is bright and lemony and full of nutrients. Parsley is one of the most nutrient-dense plants we can put into our bodies. I feel so recharged and energized when I eat this! 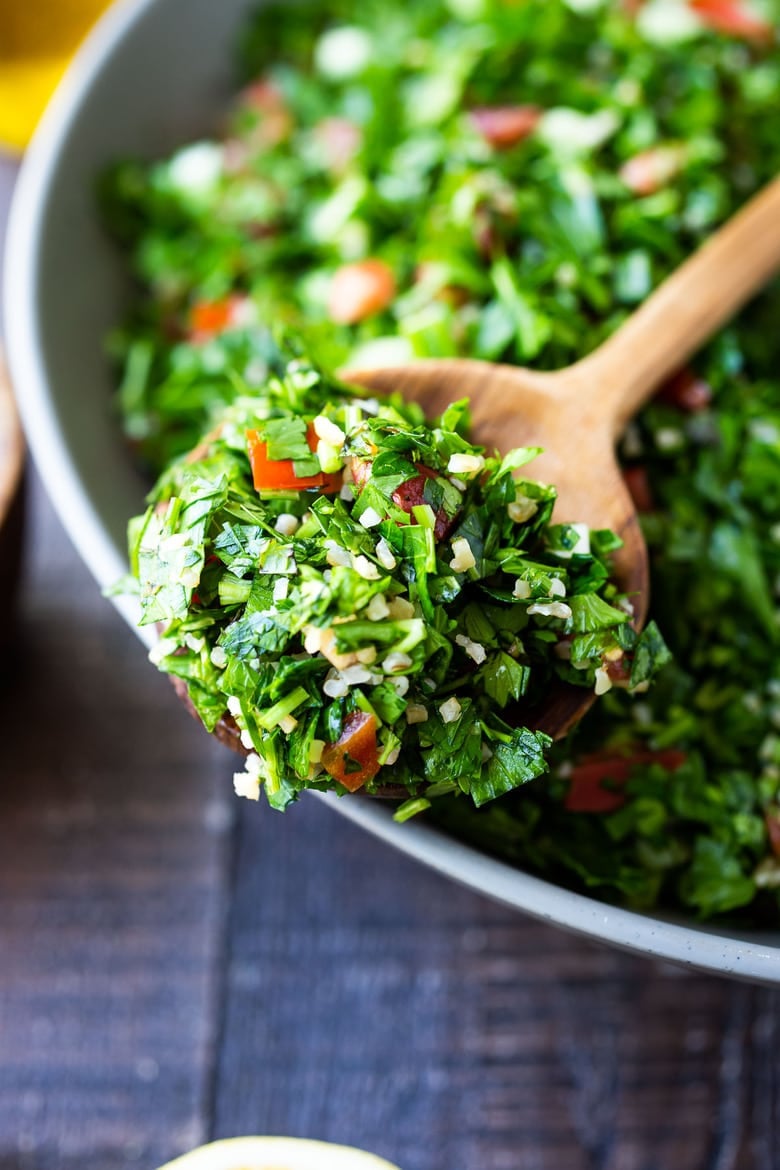 On the homefront: As of last week, we’re down a cat. I knew when we brought Cookie down to California, that it would probably be a one-way trip. She’s the old kitty we inherited from my mother 10 years ago, and believe me when I tell you, she was ancient when we got her.

We had a bit of a rough start, Cookie and I. She had always been a “one person cat”, and all spit and vinegar when it came to anyone else.

So when my mom died, she immediately ran away from home- disappearing into a new city, devastated, and quite disappointed that I was the backup plan. When she finally returned 10 days later, she had lost half her body weight. It was the first time she let me pick her up and the first time I felt a tenderness towards her. She began to purr. From that day forward, we began to get to know each other, and eventually form a bond.

Looking back I see how much we needed each other, how each of us held a piece of my mom, for the other.

I miss her little warm purring body more than I can articulate.  She became my morning touchstone, bringing me to the present,  opening my heart with her loving presence. Even if nothing else got accomplished that day, those moments together, somehow felt “enough”.

She purred in my arms to the other side. 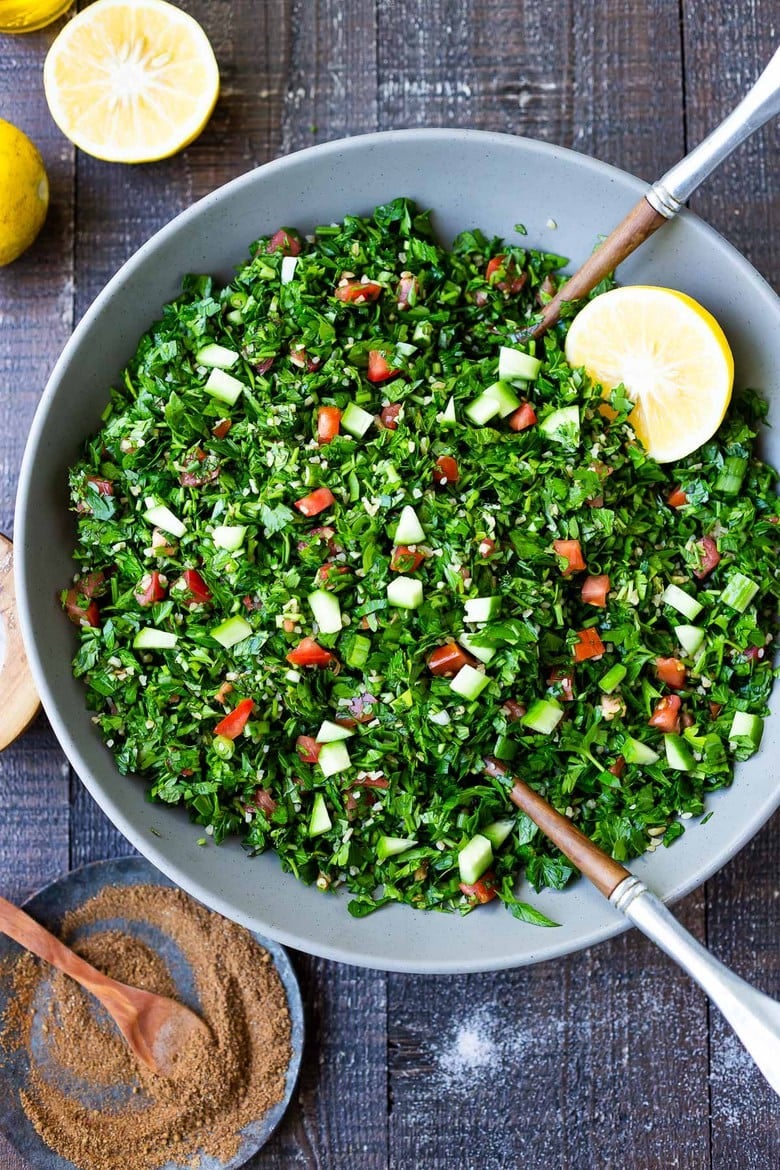 So here you go- my mom’s Lebanese Tabouli. Hope it brings you as much joy as has brought me.

What to serve with Tabouli:

How to make authentic Lebananese Tabouli  (or Tabbouleh) – this recipe is full of flavor, vegan and can be made with bulgar wheat or quinoa with a hint of Lebanese 7-Spice that truly elevates. Enjoy with Pita bread, hummus,  or baba ganoush!

TIP: To wash the parsley, keep the bunch intact. Hold each bunch like a bouquet of flowers with leaves pointing upwards under the cool running water, wriggling the band a little to let any dirt or grit release from the bottom stem end, down and away into the sink. Repeat with remaining. Go outside, and holding the stems tightly, swing each bunch like you would an overhead baseball pitch, or perhaps cracking a whip, flinging all the water away. This allows you keep the bunch intact for faster cutting. Plus it just feels good energetically, like you are flinging away all tension/anxiety away from the body. 😉

7-Spice Mix – Use the remaining 7- spice as a “rub” to coat chicken or tofu (make sure to season each with salt and pepper first) before pan-searing. Very tasty with the Tabouli!