Nachos Supreme! This loaded vegetarian nacho recipe is made with flavorful vegan “walnut chorizo”! A nutritious & delicious nacho recipe that is baked in the oven. Vegan-adaptable and Gluten-free! 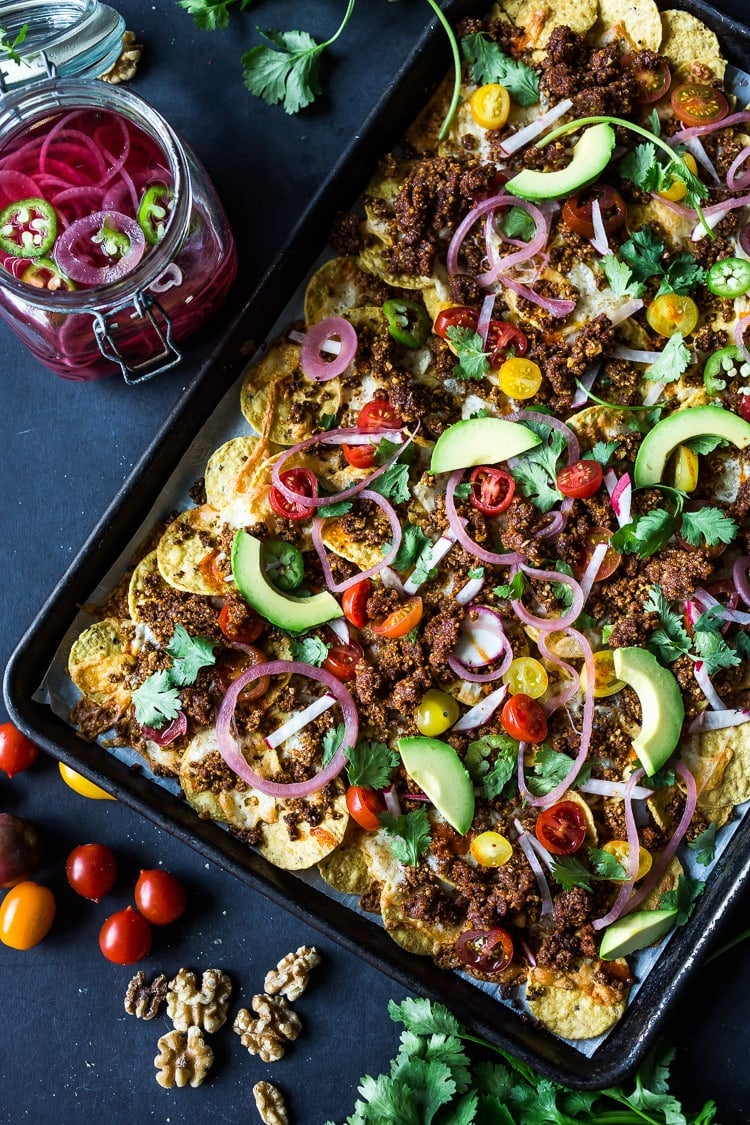 There is no greater power than to be in harmony with oneself, which is to fully embrace all that we are.~ Panache Desai

I’m a little embarrassed to tell you how often this nacho recipe happens for dinner around here. My husband practically begs for them, and over the years I’ve played with fun and different ways to make them a little less heavy and more of a meal.

Long ago I cut out the meat and Brian didn’t notice. Then I experimented with adding a lot of fresh things to the top of the nachos and lightening up the cheese. Using little dollops of refried beans and adding avocado give them a delicious creaminess.

This latest incarnation is made with “Walnut Chorizo” which only takes 5 minutes to make! Brian gave it the double thumbs up, so I thought I better share it here. 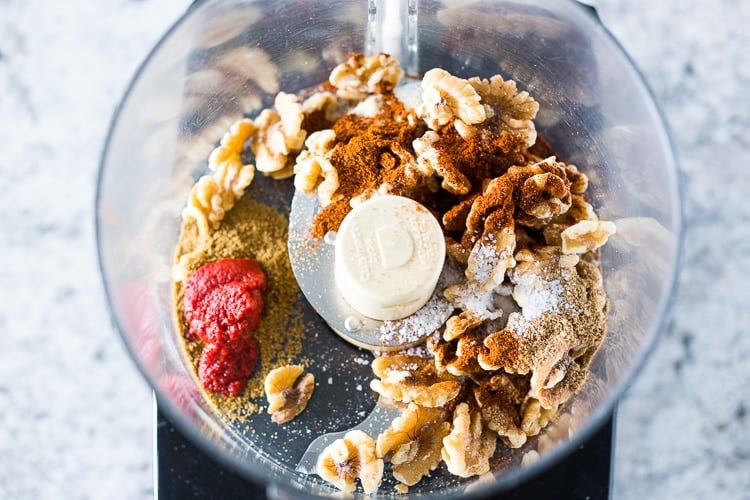 The walnut chorizo is basically blended up walnuts with chorizo spices like cumin, coriander and smoked paprika and a little tomato paste. You could  also use the adobo sauce from a can of chipotles. Make this as spicy or as mild as you want.

For this Nachos recipe, I’ve partnered with California Walnuts (all opinions are my own) to create a nutritious, flavorful recipe featuring walnuts. Earthy, meaty walnuts become flavorful base of this recipe. The awesome thing is, I know you will find a hundred other uses for Walnut Chorizo – think tacos, breakfast burritos, enchiladas, taquitos, burrito Bowls…. you get the idea.

The walnut chorizo has so much depth and flavor, such a great meat substitute!

Plus walnuts are nutritious, heart-healthy1, contain no cholesterol, and are the only nut with a significant amount of plant-based omega-3 ALA (2.5 grams/ounce).

A delicious way to incorporate more walnuts into our diet! 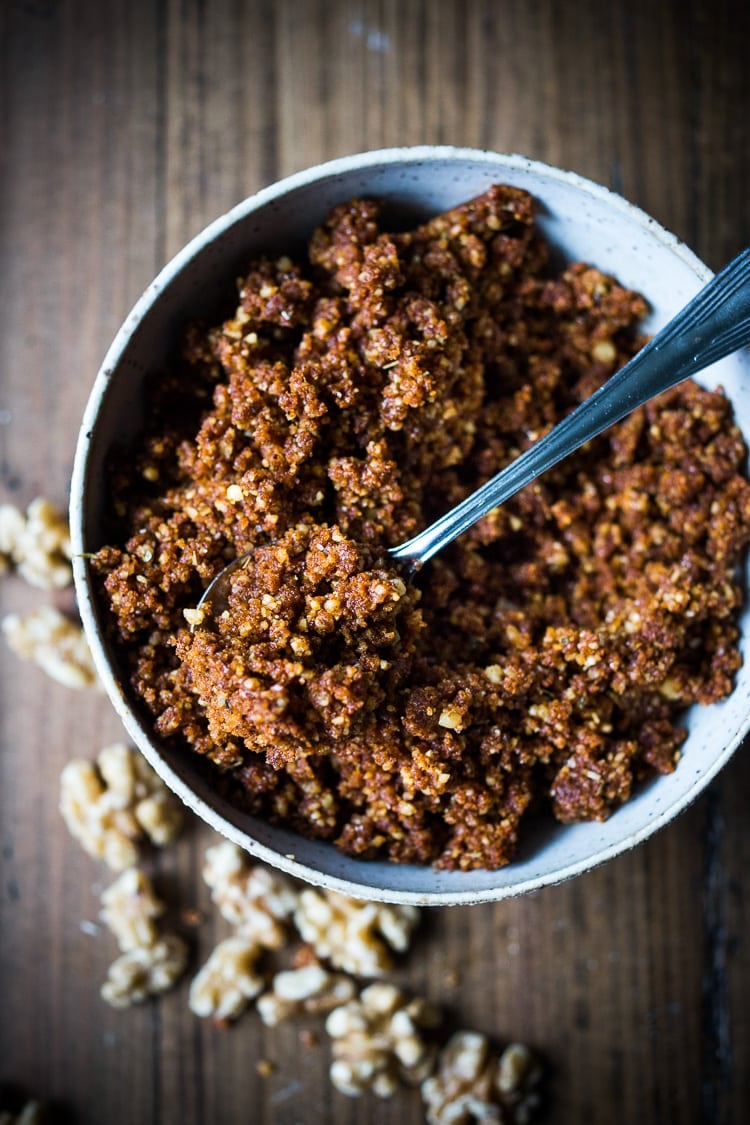 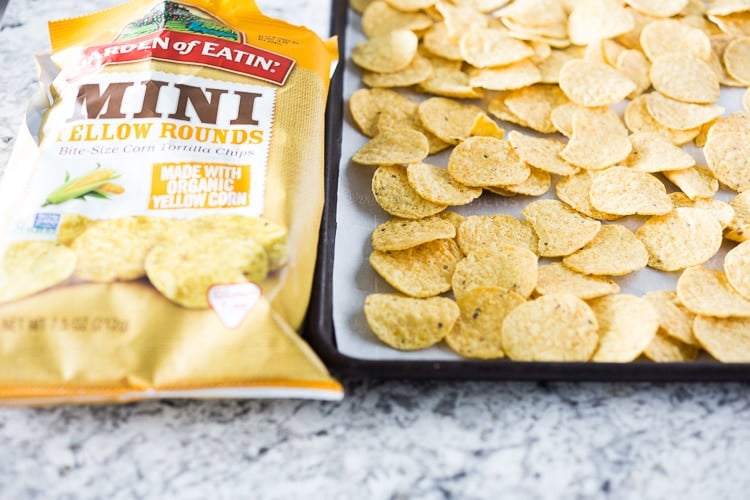 Add your choice of cheese ( a melty vegan cheese works well here too!), small dollops of refried beans and scatter the walnut chorizo over top. 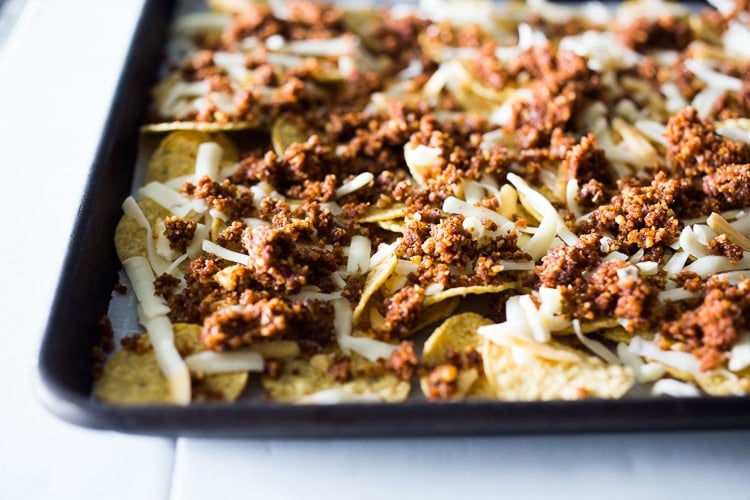 Bake the nachos in a 375F oven for 12 minutes or until cheese is melty.

While the nachos are baking, make the fresh toppings. 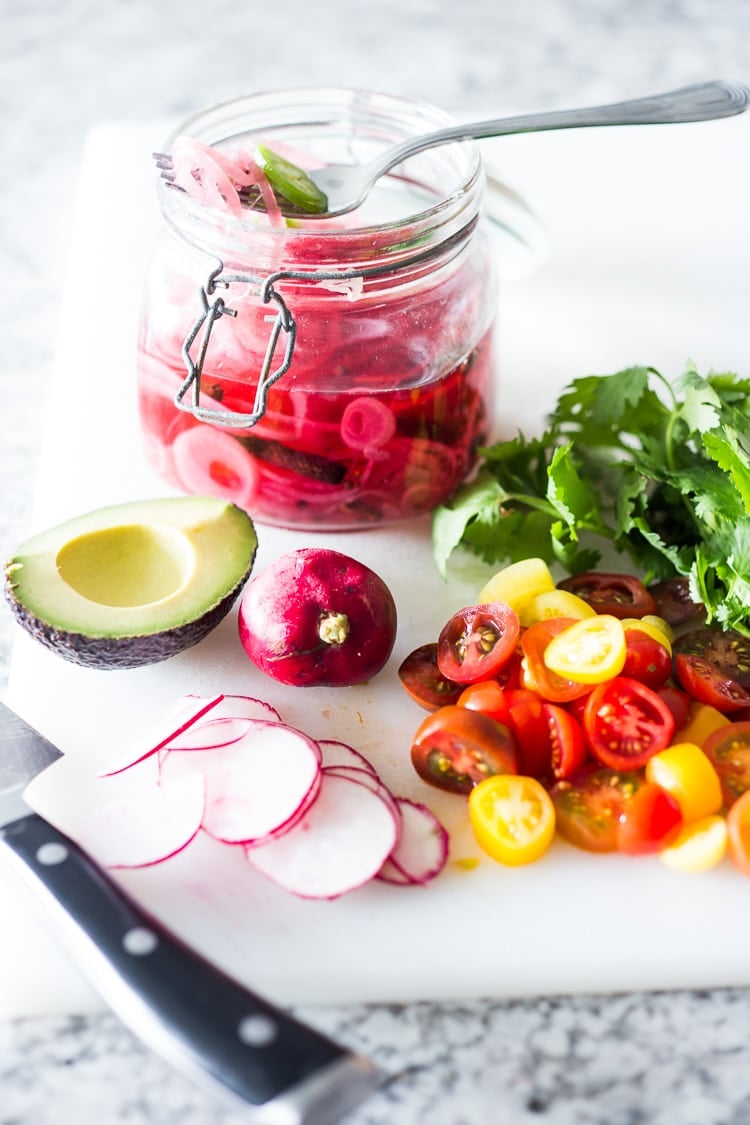 I love adding pickled onions, or pickled jalapeños for a burst of flavor.

Garnish with fresh cilantro leaves and your favorite hot sauce. 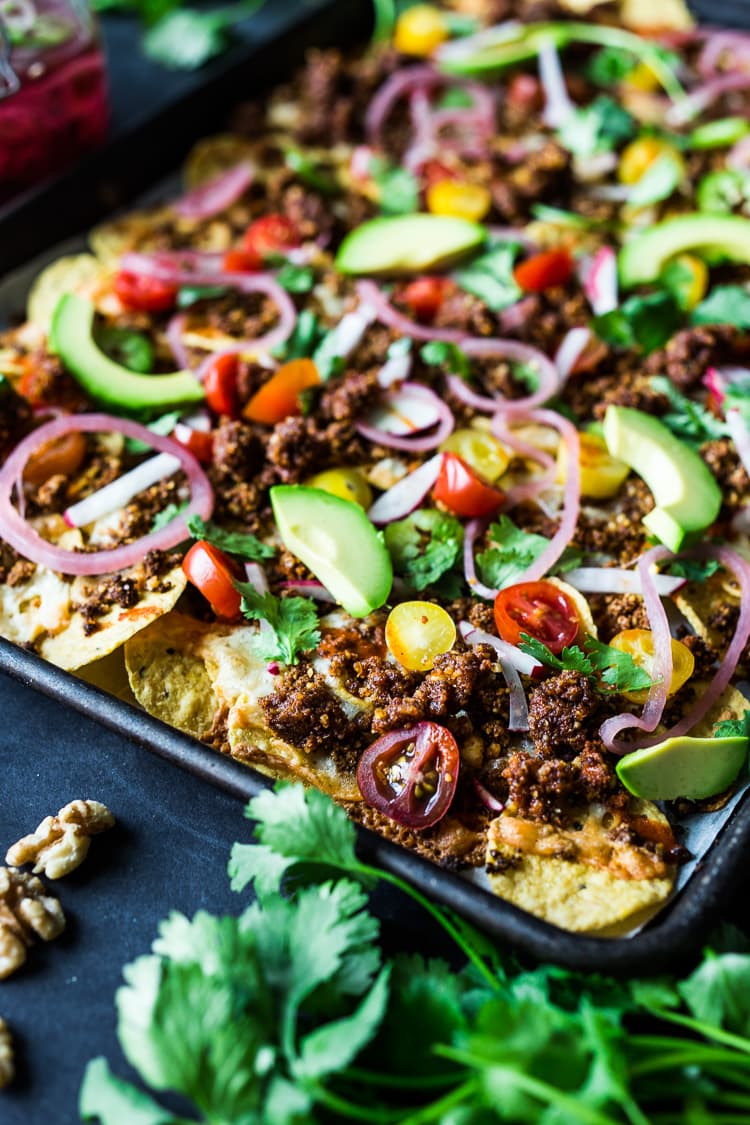 And there you have it…..Nachos Supreme! So flavorful, and so easy. 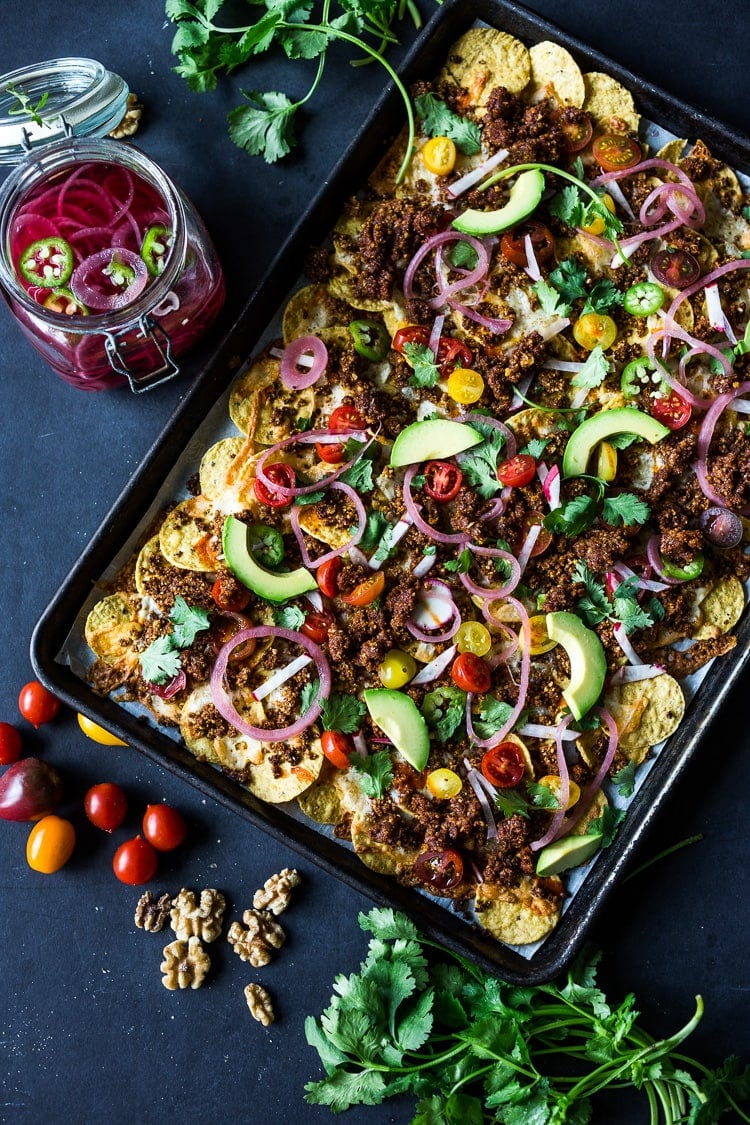 Give these loaded vegetarian nachos with “walnut chorizo” a try, and let me know what you think in the comments below! A healthy, delicious nacho recipe that is baked in the oven.

1 Supportive but not conclusive research shows that eating 1.5 ounces of walnuts per day, as part of a low saturated fat and low cholesterol diet, and not resulting in increased caloric intake may reduce the risk of coronary heart disease. One ounce of walnuts provides 18g of total fat, 2.5g of monounsaturated fat, 13g of polyunsaturated fat, including 2.5g of alpha-linolenic acid, the plant-based omega-3.

Nachos Supreme! These loaded vegetarian nachos are made with flavorful “walnut chorizo”! A healthy, delicious nacho recipe that is baked in the oven. Vegan-adaptable and Gluten free!

Make the Walnut Chorizo. Place walnuts, spices, salt and tomato paste in a food processor and pulse until it is the texture of course sand. Add a tablespoon of water, and pulse again, until just combined. ( see notes) Set aside.

Line a ½ sheet pan ( 13 x 18 inches) with parchment paper. Cover with tortilla chips. Drizzle chips with a little hot sauce. Spread out small spoonfuls of refried beans over top. Sprinkle with the cheese and spread out the walnut chorizo. Place in the oven until warmed through and cheese is melted, about 10- 12 minutes. While it’s baking prep your garnishes.

When cheese is melty, sprinkle with the tomatoes, cilantro, radishes, avocado, cilantro and any other garnishes you like. Pickled onions and jalapeños are nice. Sour cream or yogurt also good. 🙂

Eat immediately! These are best served right away, before cheese unmelts!

If using the walnut chorizo as taco filling or in burritos, where you might heat it up in a skillet, feel free to add a another tablespoon or two of water, so it doesn’t dry out in the pan. For extra richness you could even add a drizzle of olive oil.