Here’s a simple recipe for Blistered Shishito Peppers with crispy garlic and Furikake Seasoning- a delicious and easy appetizer that can be made in minutes! Vegan.

If you haven’t tried Blistered Shishito Peppers yet, you are in for a treat! Make sure to put them on your list of musts- especially if you are a fan of a little heat. Though this recipe technically serves 4-6 people, my husband and I can easily down the whole batch between the two of us, while sipping on cocktails or cold beer – a little before-dinner treat.

What I love about Shishito Peppers are all the crinkly little nooks and crannies that like to hold seasonings and sauces so well! You could easily toss these with Szechuan Sauce, or sprinkle with Zaatar or Dukkah and served over a plate of hummus,  or try it this way with the Furikake, which I love, keeping it in the Japanese vein.

What are Shishito Peppers?

Shishito Peppers, in essence, are small, mild, crinkly, brightly-colored green, Japanese peppers that are typically pan-seared, blistered or roasted and served up as a flavorful appetizer. They are typically 3-inches long and about 3/4 inch wide.

Padrone Peppers look very similar and are in fact a Spanish variety of the same pepper – which can easily be replaced here.

Truthfully I sometimes can’t tell the difference and originally thought these were padrones, but the farmer insisted they were shishitos. So I’m going with it.

Though Shishito peppers are fairly mild and sweet like bell pepper, occasionally you’ll stumble on a spicy one, which is all part of the fun!  One in ten peppers, on average, are spicy. 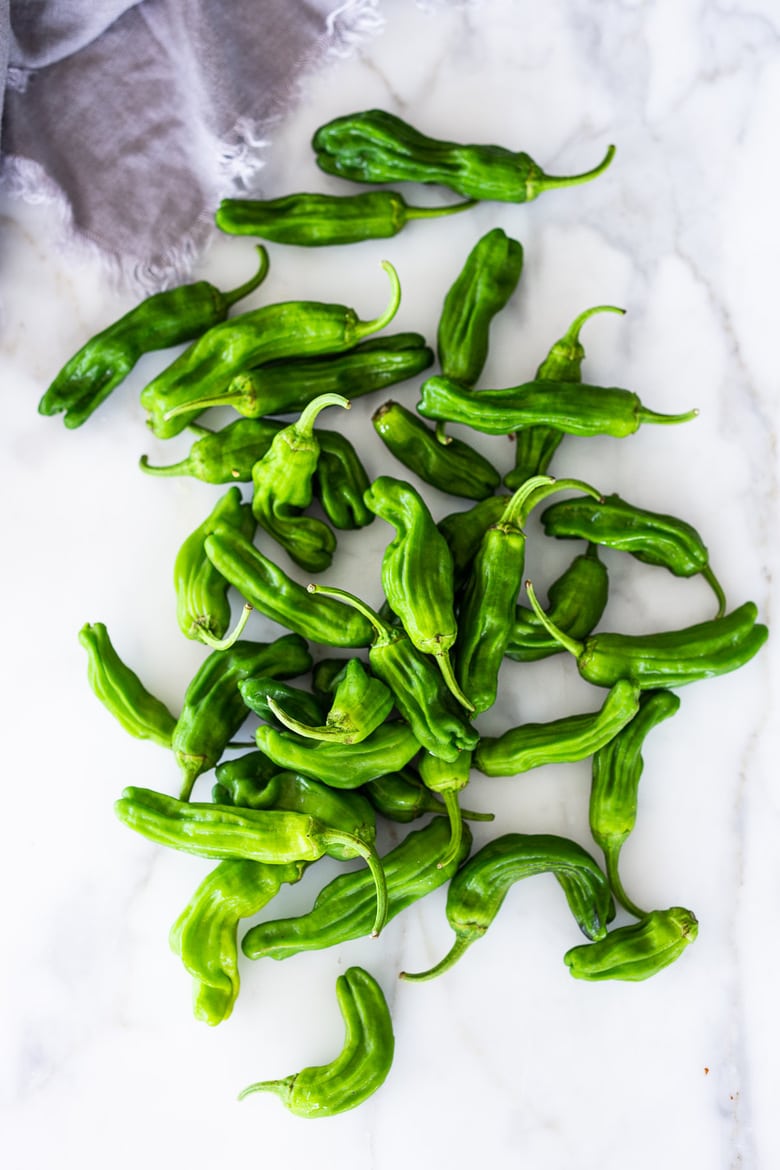 How to Cook Shishito Peppers:

Because they are wrinkled, it is a good idea to coat them in oil before cooking so they get more evenly coated and the oil gets down into the nooks. Toss them in a bowl with the oil and a little salt.

At this point,  you could simply salt and pepper them and either roast, pan-sear or blister and they would be good, just like this. 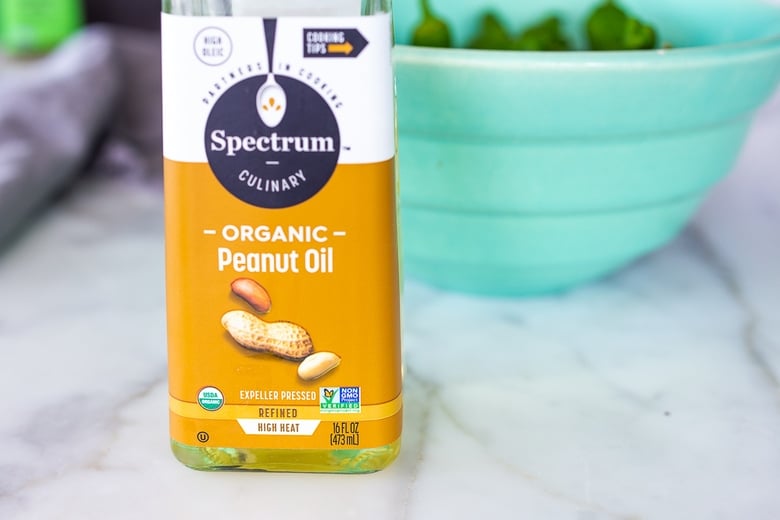 When blistering, be sure to use a high heat oil. I really love the flavor of peanut oil here. 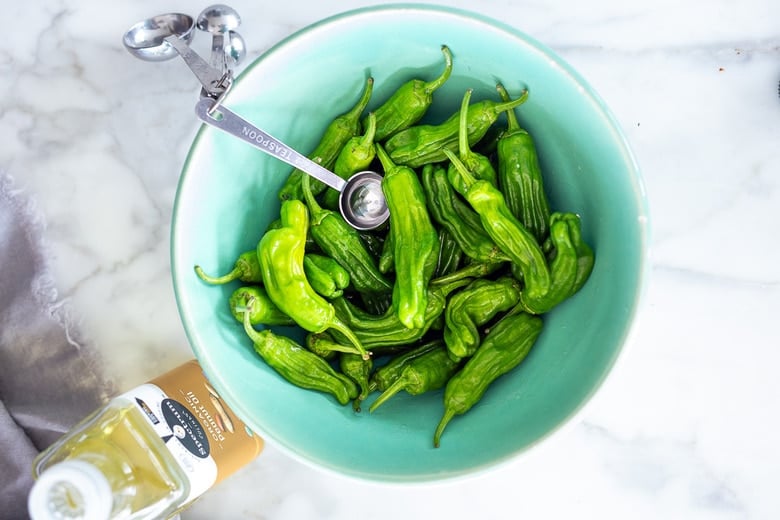 Place the oiled and salted shishito peppers in a hot skillet or wok and sear until blistered on most sides. 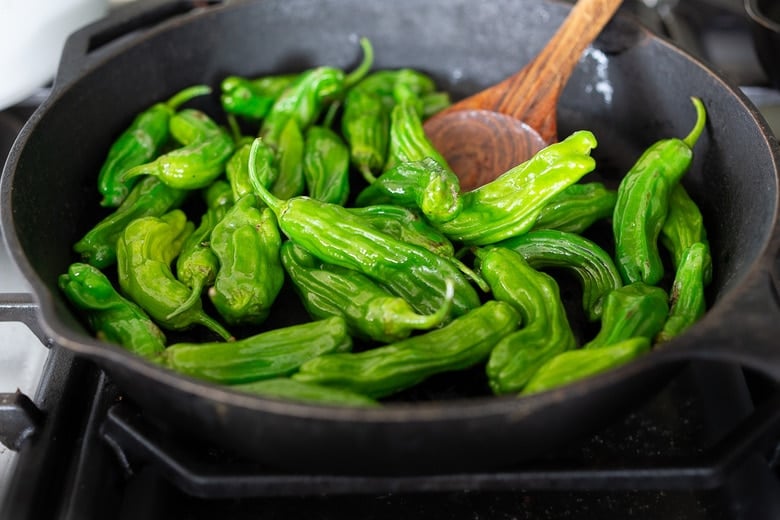 This will take 5-7 minutes. Let them cook just until they begin to collapse. 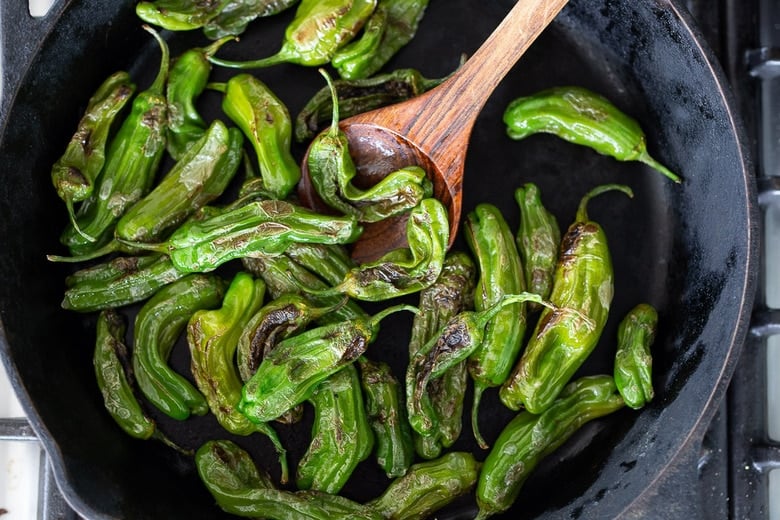 For added flavor, scoot them to the side, or set on a separate dish and sear some garlic slices. This will get everyone’s appetite going for sure. 😉 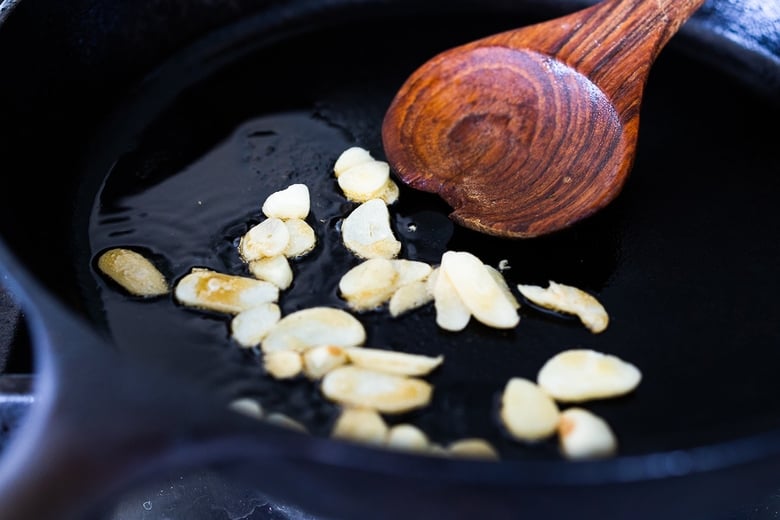 Add the Shishito peppers back into the pan, splash with a little soy sauce (or GF liquid aminos),  sesame oil and generously season with Furikake Seasoning.

If you don’t feel like buying or making furikake seasoning, an easy alternative is to use Everything Bagel Spice or even just salt, pepper and sesame seeds.

The bits of toasted garlic slices not only add good flavor but good texture. 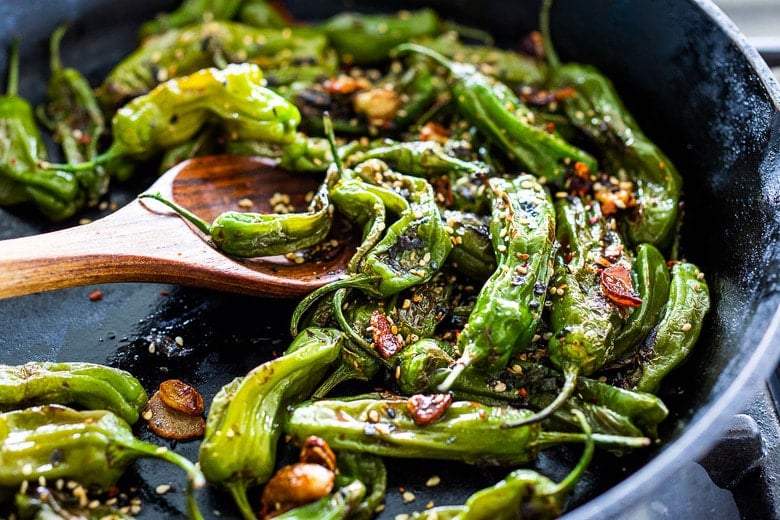 Give them a good stir and serve warm! 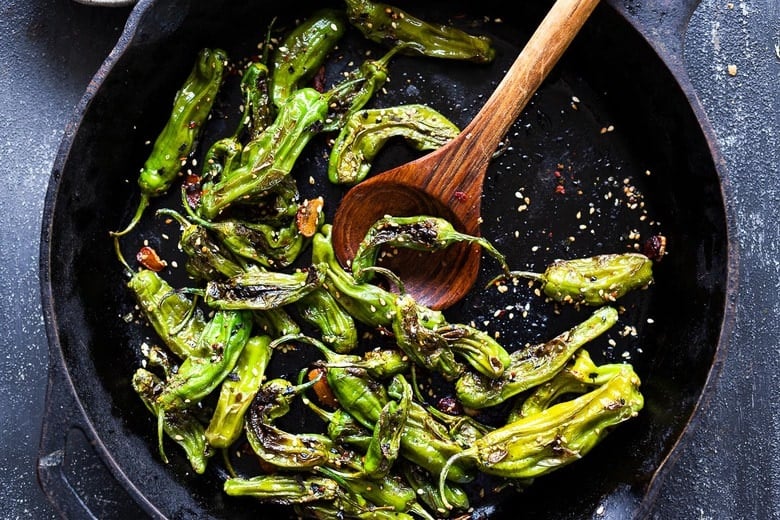 These Blistered Shishito Peppers are very low in calories, no super filling, but full-flavored and can be made in minutes. In my mind, they are the perfect appetizer. 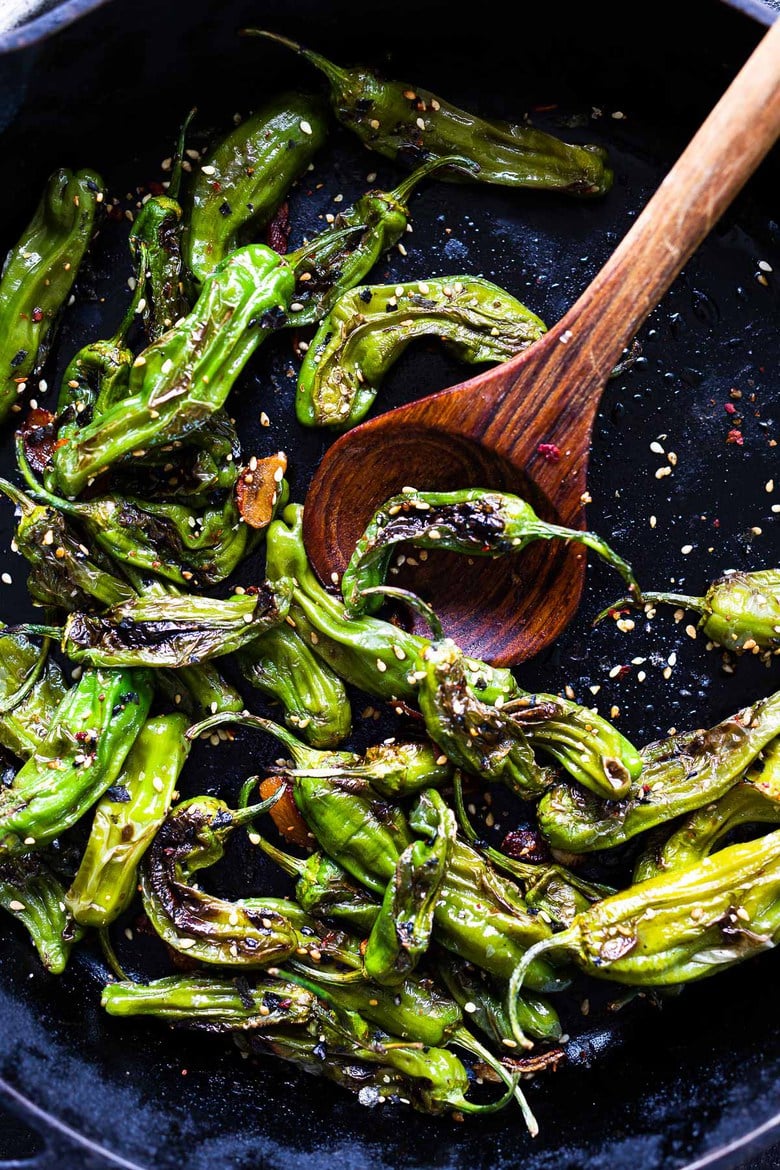 Hope you like these Blistered Shishitos as much as we do! Let us know in the comments below!

A simple recipe for Blistered Shishito Peppers- a fast and easy appetizer that comes together in under 15 minutes!

Toss the Shishito peppers with the oil and salt to lightly coat.

Heat an extra-large skillet over medium heat. Add the peppers and let them blister, tossing every 3 minutes or so, until most sides are blistered and blackened and the peppers just begin to soften.

Set the peppers aside on a plate and quickly crisp the garlic in the same pan over medium heat, adding a little more oil if necessary, letting them get golden and fragrant.  Add the peppers back into the pan to warm. Turn heat off.

Drizzle with the sesame oil, soy sauce and give a good toss. Platter, sprinkle generously with the Furikake Seasoning.  Serve immediately. They are also fine served at room temp!

One out of ten peppers can be spicy, but most are mild. 🙂