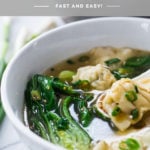 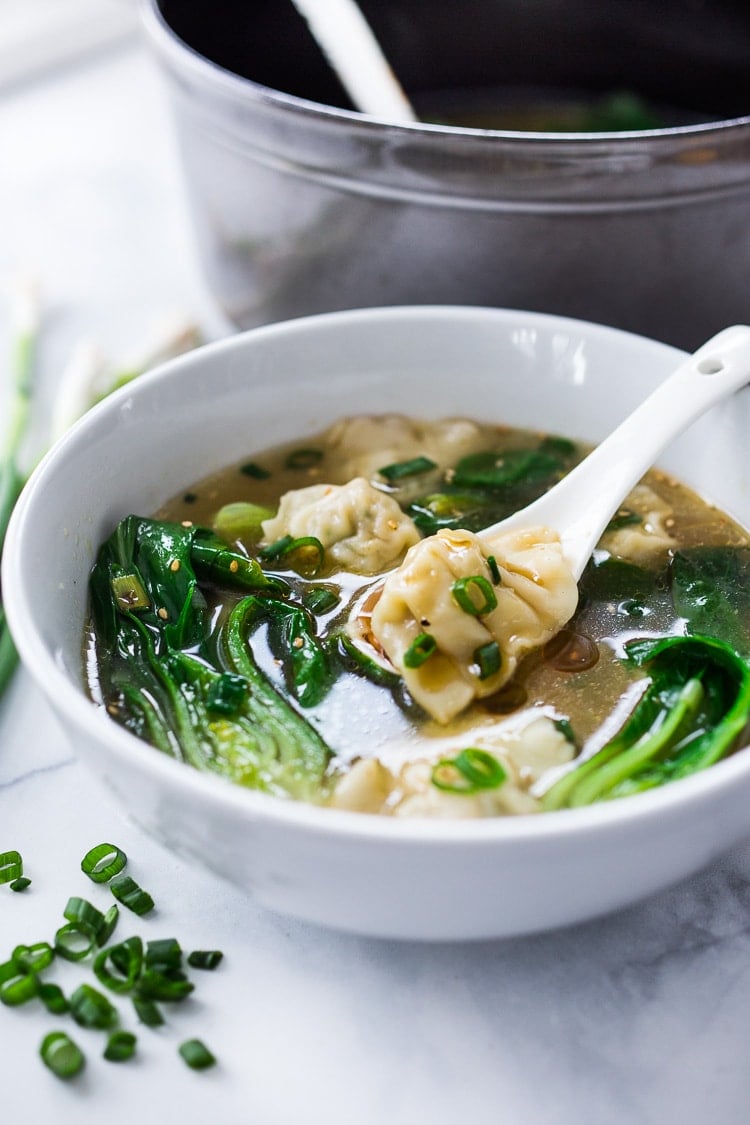 It’s still snowing. On chilly nights when time is short, this fast and easy soul-warming soup is a total godsend. It is very simple to make but doesn’t lack in flavor. But what I love most about this 15 Minute Wonton Soup is the huge handful of greens that are thrown right into the pot at the end, giving it a beautiful burst of vibrance and nutrients.

It is also very low in calories while being filling and satisfying! 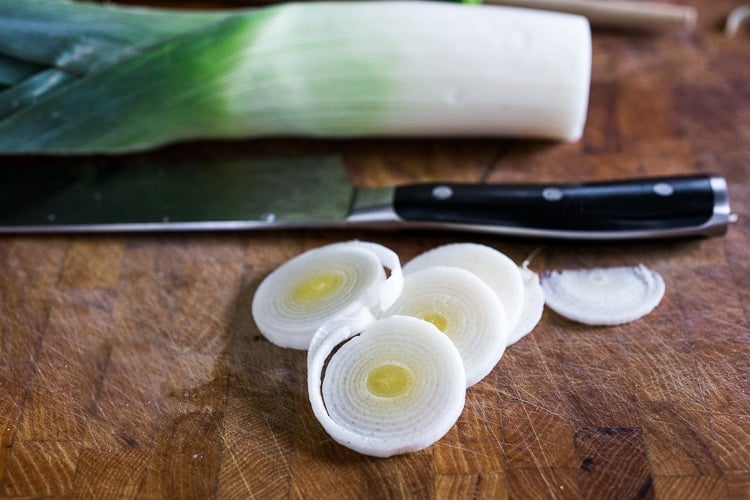 The flavorful broth is made your choice of shallots or leeks, chicken or veggie broth, ginger and lemon. Spice it it up with chili flakes or sriracha. 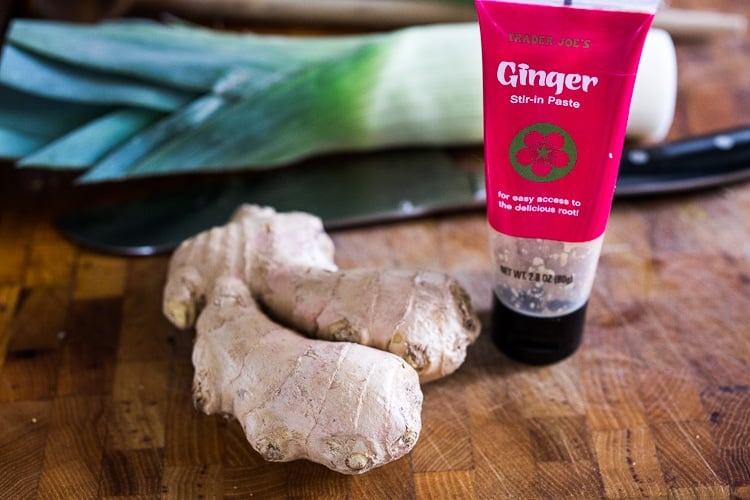 You can use slices of fresh ginger or even ginger paste. 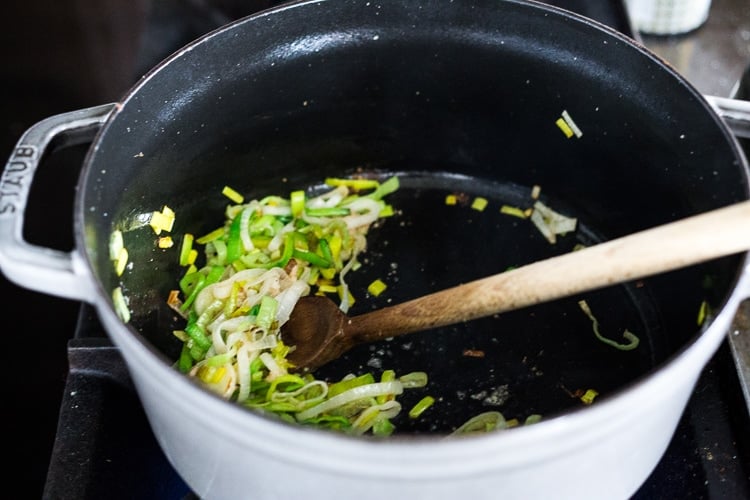 Saute the leeks and ginger then add the broth and bring to a boil. 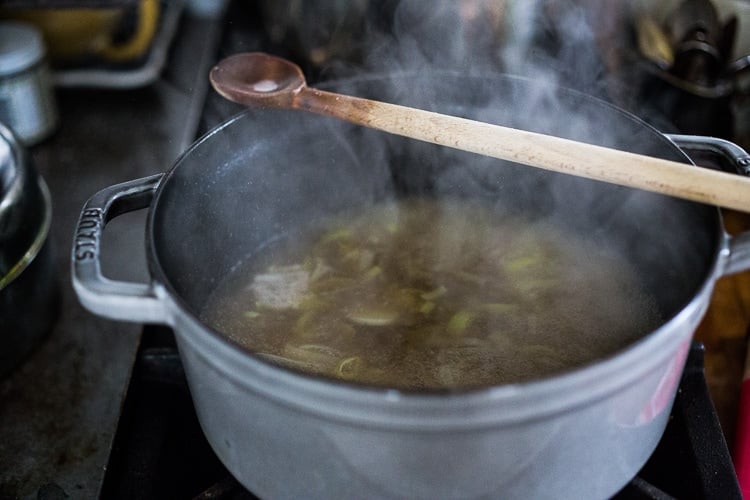 Use your favorite frozen wontons – preferably, smaller, bite-sized wontons, which cook up very quickly. I really like the bite-sized chicken wontons from Trader Joes. Or feel free to use a vegan or vegetarian wonton. 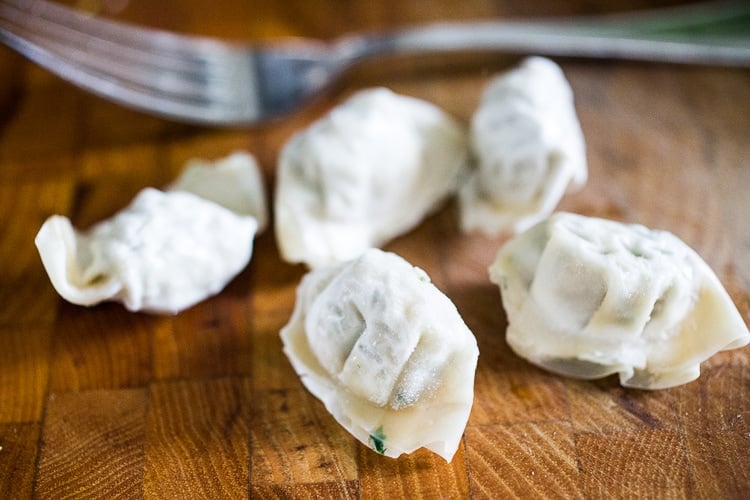 For greens, I often use what I have on hand- sometimes this is baby spinach or arugula,  sometimes it’s kale, and sometimes it’s baby bok choy like you see here. I’ve even used shredded cabbage and shredded brussel sprouts allowing them to wilt a little bit longer. Sometimes when I have more time, I’ll toss in matchstick carrots, cabbage, other veggies along with the wontons. 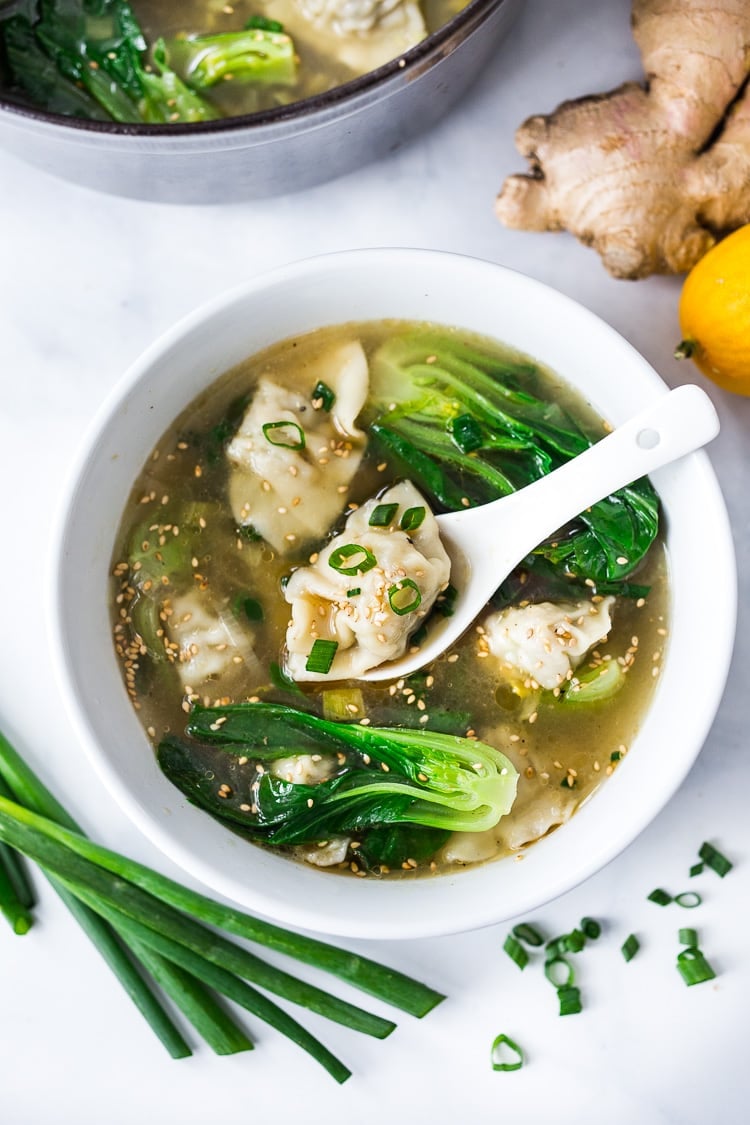 In a medium pot, saute the shallot and ginger in oil, over medium heat, until fragrant, about 2 minutes. Add the broth, cover and bring to a boil. Add the wontons and simmer according to directions on the package ( 3-5 minutes- depending on size) They normally float when cooked through.

Taste the broth and add salt and a squeeze of lemon if you like. I like mine quite lemony, but season to your own taste.

Drop in the greens, cooking until wilted. Spinach will take 45 seconds, kale will take longer.

Divide among two bowls and sprinkle with any of the garnishes.

To take this in another direction, flavor-wise, sometimes I’ll skip the lemon and add a drizzle of toasted sesame oil, which gives this an earthy depth which I crave sometimes. You can toss in cubes of tofu ( or left-over chicken) if you like.

Other times I’ll throw in lemongrass and lime leaves, and use lime instead of lemon for more a Thai or Vietnamese twist.  Play around and you will find your perfect version.

It is all about the broth!