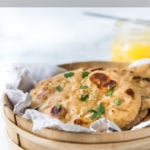 A simple step by step recipe for authentic Indian Naan Bread made on the stovetop with all your favorite toppings – garlic naan, onion naan and seeded naan! Allow 45-60 minutes rising time. 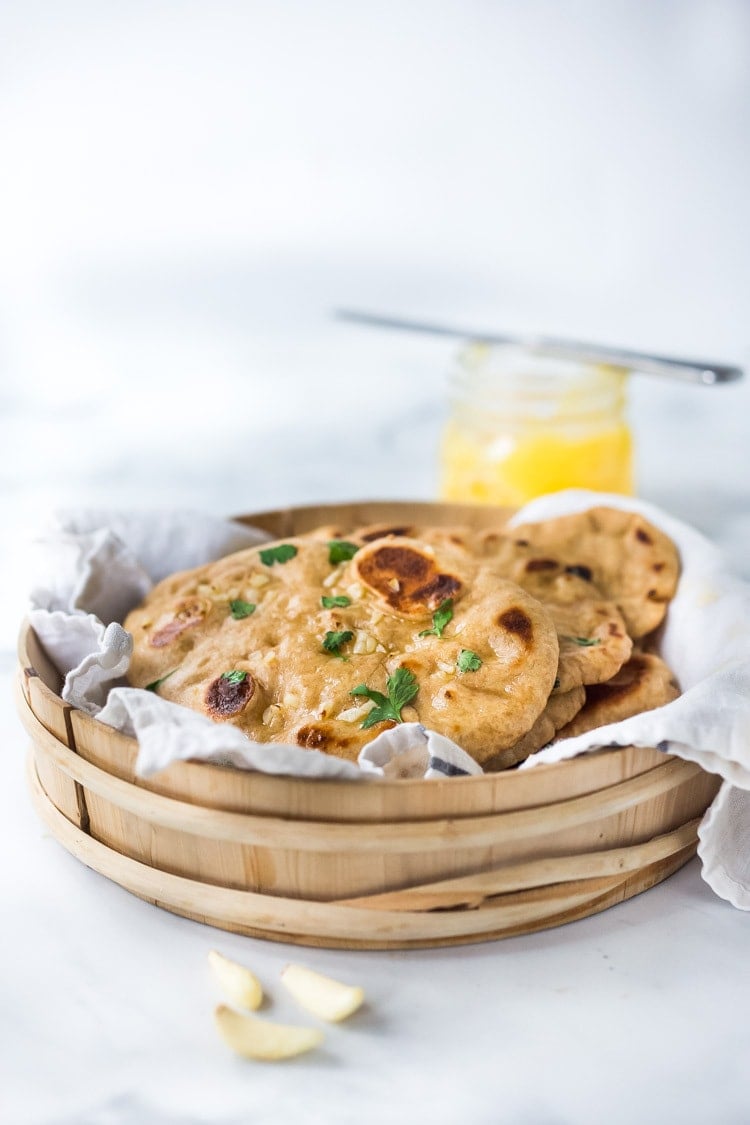 To live in this world you must be able to do three things;  to love what is mortal, to hold it against your bones knowing your own life depends on it, and, when the time comes to let it go, to let it go. ~Mary Oliver

An essential in Indian cuisine, naan bread is the perfect companion to many of our favorite Indian dishes.  Here is an easy naan recipe with simple, step-by-step instructions.

This traditional naan recipe is made with yogurt and instant yeast, and cooked in a dry skillet, giving the soft, pillowy naan a delicious crispy exterior which I fell in love with, while in India.

Today I’ve opted for whole wheat Garlic Naan, my favorite, but feel free to keep it plain and simple, or embellish with whole seeds – see the recipe for all the yummy variations, and find your favorite!

On the home front: I’ve been home from India for over a week now, yet still feeling foggy-headed and jet lagged. It is sooooo frosty here, the trees are beautifully flocked, but I’m struggling to adjust to the cold. Thankfully my husband loves to make the house cozy. He made candles while I was gone, and so there are candles everywhere, lit and glowing. It helps.  Along with the fragrant incense, I brought back from India. I’ve been on the cookie diet again (my annual holiday diet), and have been baking, which actually seems to help too. Perhaps not the waist-line, but my well-being for sure. 😉 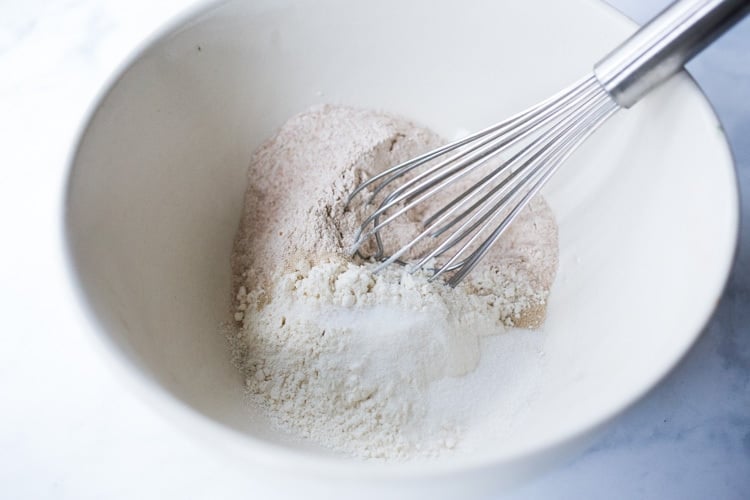 In a smaller bowl, mix the warm water, yogurt and olive oil. 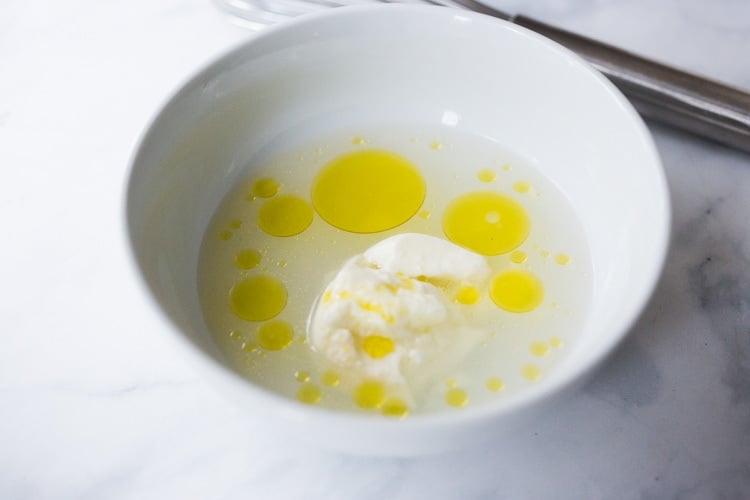 Pour the wet into the dry and mix to combine. 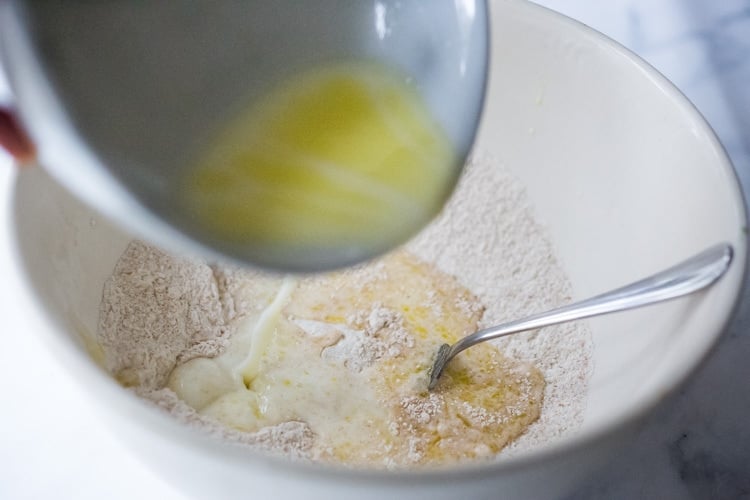 Mix the dough with a fork until it comes together. 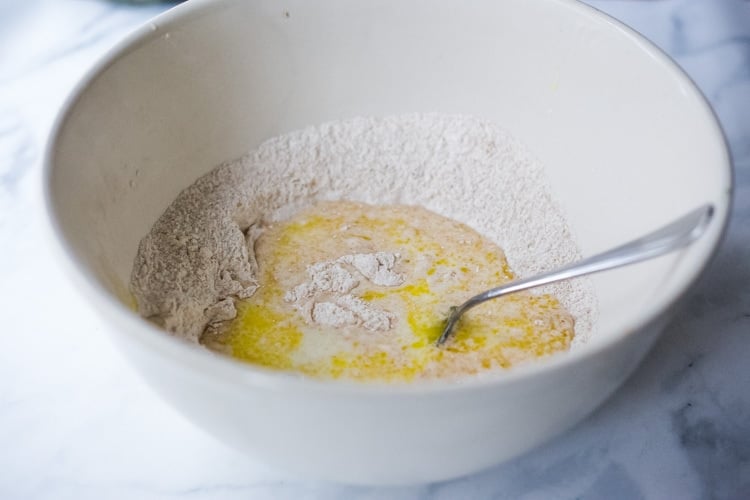 With a floured hand,  knead the soft dough for a minute or so and form a ball, and place it back in the bowl. 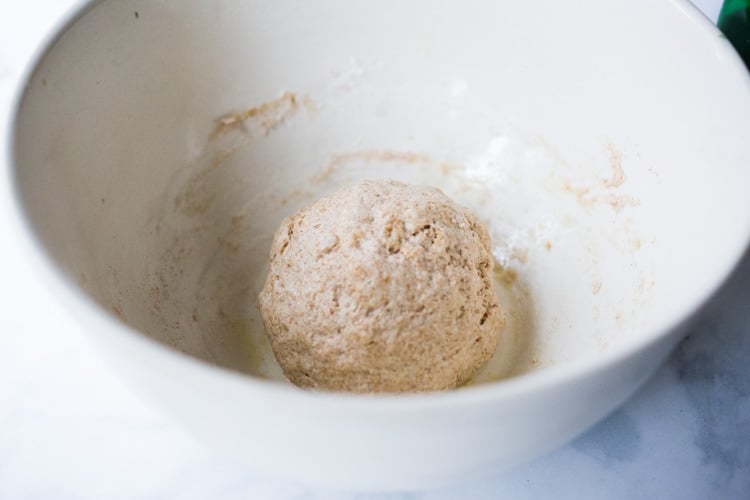 Drizzle it with olive oil, rubbing the oil around the naan dough, coating it. Cover with plastic wrap or a wet kitchen towel. 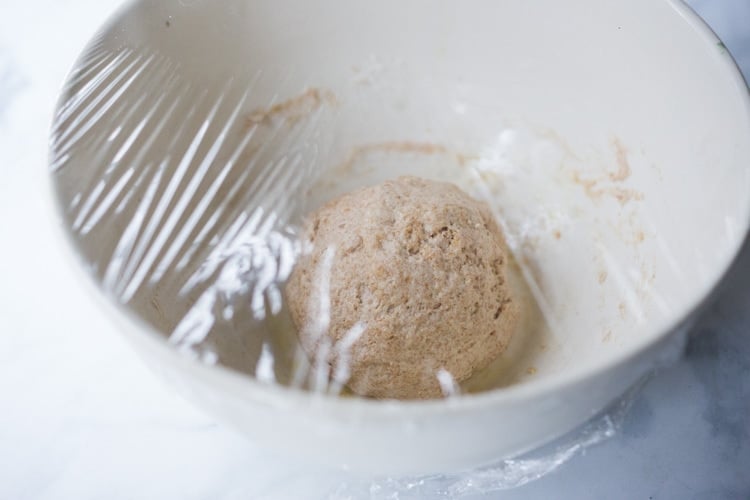 Place the naan dough in a warm spot in the kitchen until it rises, about 45-60 minutes. It doesn’t need to quite double.

Tip: The warmer the spot, the faster the naan will rise. I often place rising dough on top of my stove, with the oven turned on to the lowest setting.

If using regular Active Dry Yeast, it will require 2-3 hours to rise. 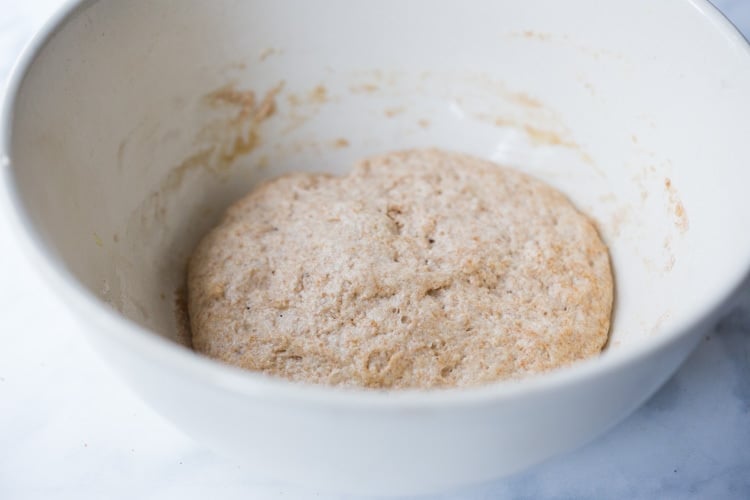 Once the naan has rise, place it on a floured surface and roll into a 1o-inch log. 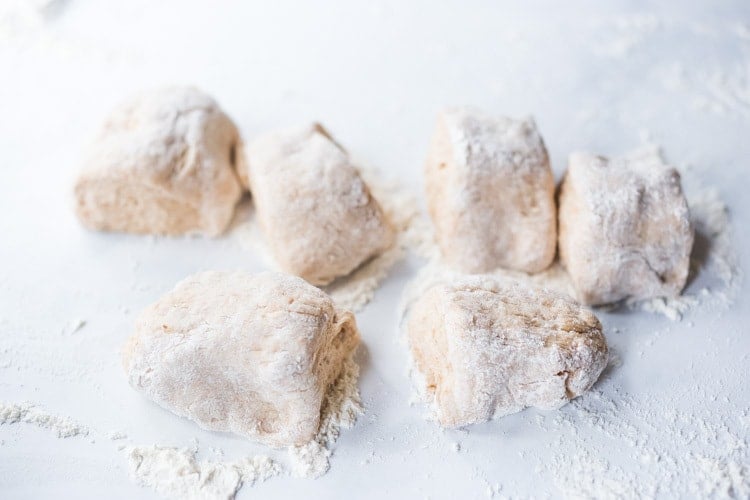 Naan should be rolled into rounds or ovals, roughly  ⅛ – ¼  inch thick.

If going for oval naan, they should measure, roughly 4 x 8 inches.

Naan really doesn’t have to be perfect and honestly can be any shape, as long as they are uniform in thickness ( or with the edges slightly thicker than the middle) and no more than ¼ inch thick. 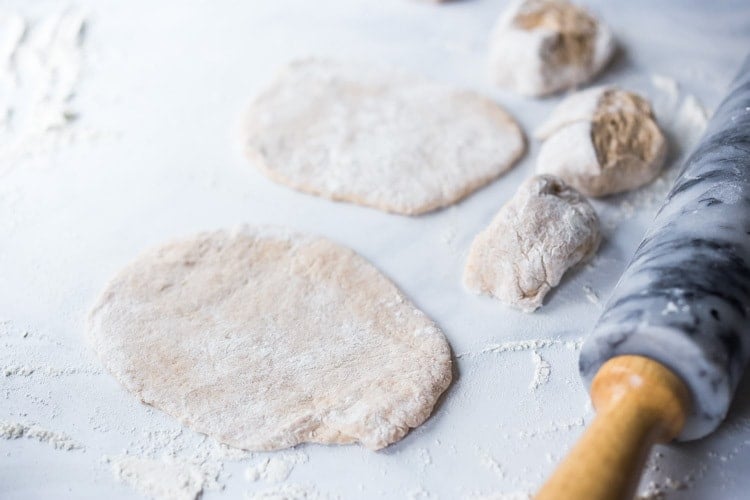 You can keep the naan plain and simple, or season it with seeds – nigella, fennel, anise, poppy, or sesame seeds ( adding to the flour bowl)  or add finely minced onion or garlic – my favorite! 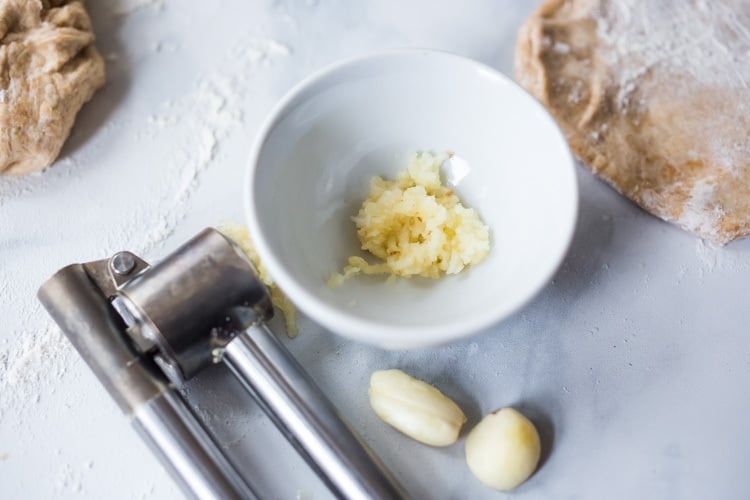 If making garlic (or onion naan), simply press the finely minced garlic into the naan with your fingers, or roll it in. 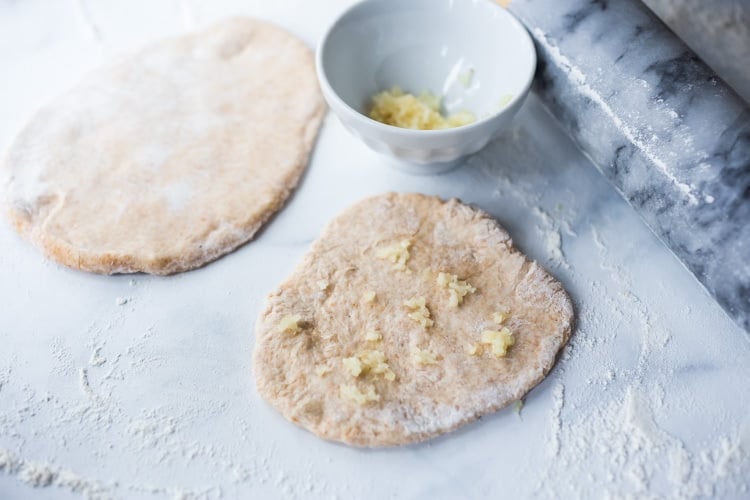 To cook the naan, and give it a nice crispy texture,  heat a DRY heavy bottom skillet, or cast iron skillet, over medium-high heat.

Cooking one naan at a time, placing the naan right in the hot skillet and toast, until large bubbles appear on the visible side. Take a peek underneath to see if the naan is deeply golden, adjusting the heat, either lowering or raising. 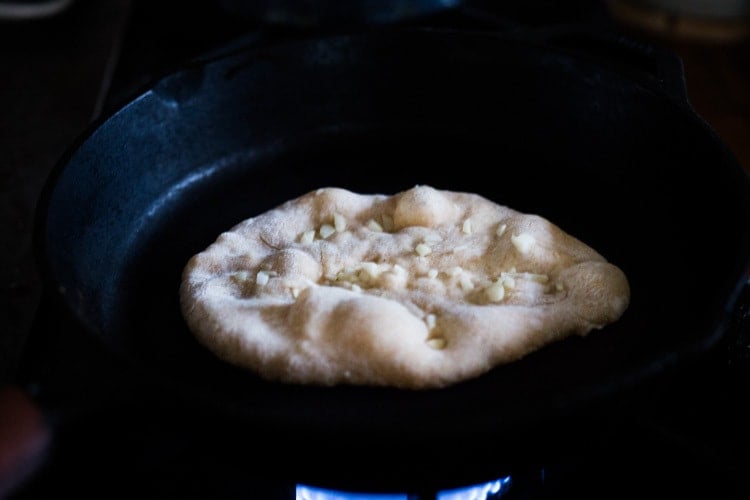 When there are large air bubbles on top of the naan bread, and the bottom side is nicely golden, flip. This will take anywhere from 2-4 minutes. Then cook the other side for another 2-3 minutes, checking to see that the air bubbles are not deeply golden but not burning. After the first one, you will get the hang of it. 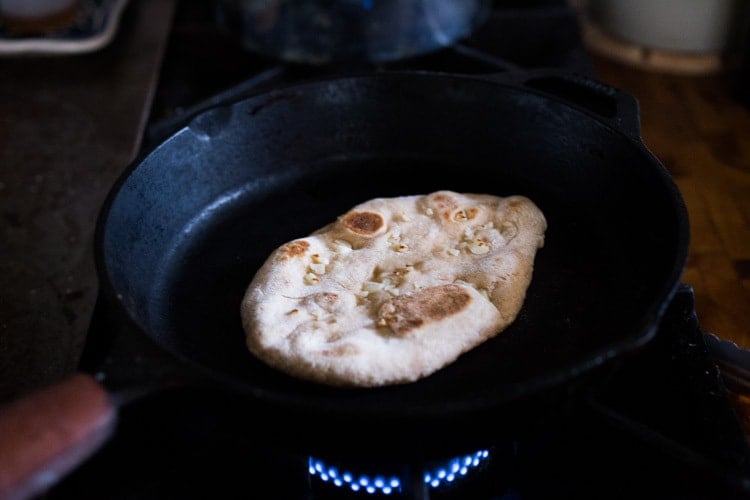 TIP: To get the naan to puff up even more, after searing each side, place the naan directly on the gas flame (medium heat) using tongs. Naan should puff up beautifully.

Stack the naan and cover with a towel to keep warm. 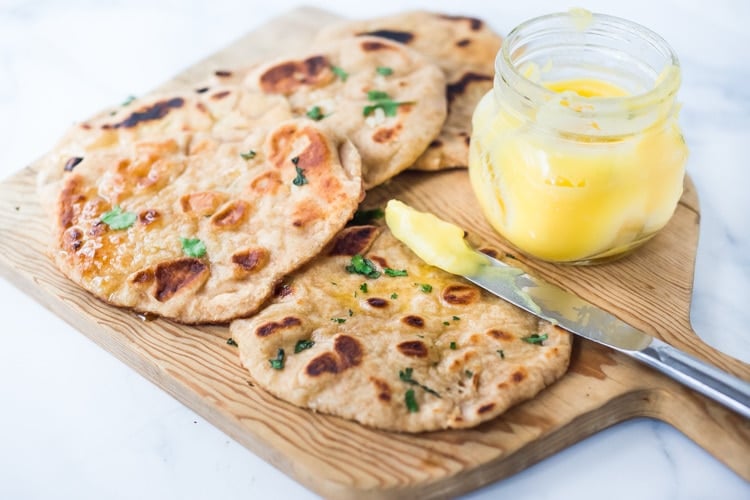 Once all the naan are seared in the skillet,  brush or spread with ghee and sprinkle with pinch of salt. Sprinkle with fresh herbs- parsley, cilantro or even scallions or chives – right before serving. 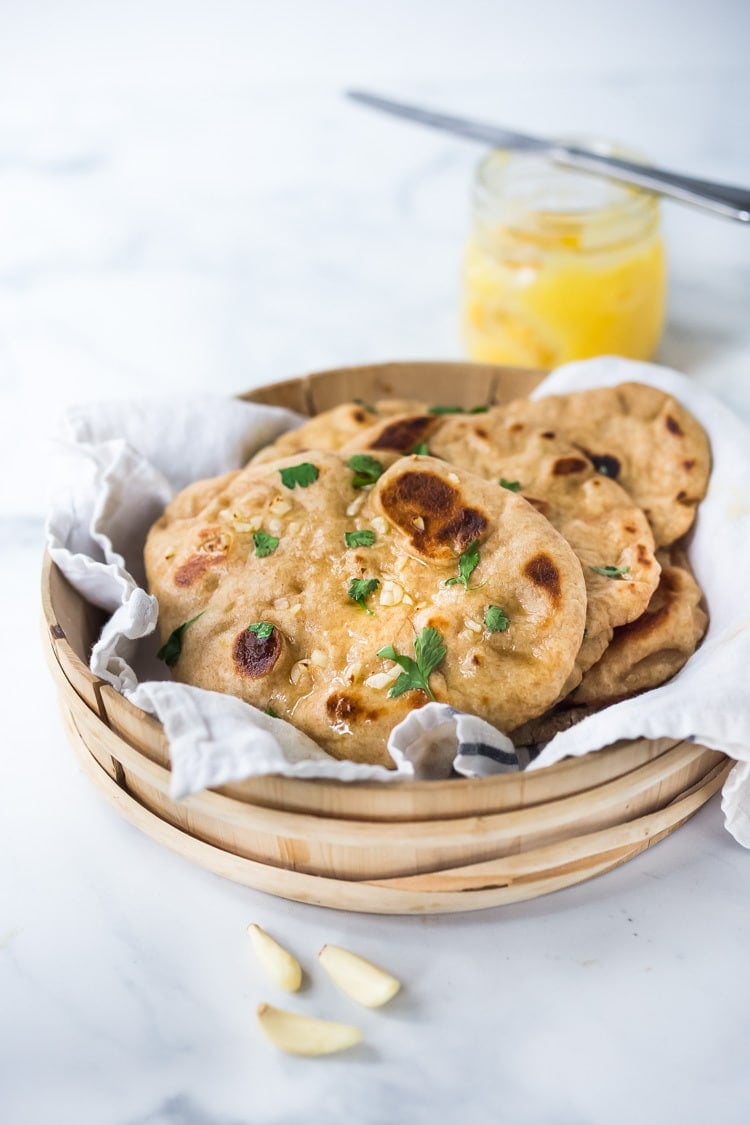 You can also keep the naan warm for a while, stacked, wrapped in foil in a warm oven- then right before serving, sprinkle with the herbs so they look nice and fresh. 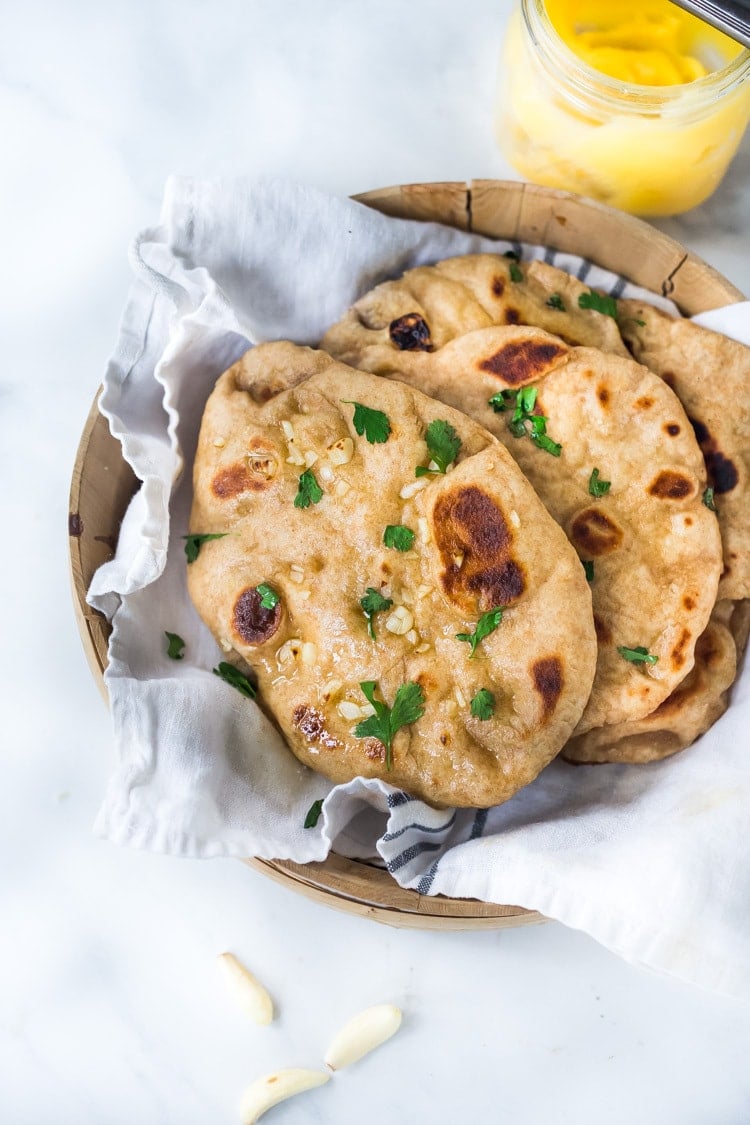 A delicious and fun addition to any Indian meal.

My husband absolutely loves it when I make these!

Naan can also be baked ahead and frozen – just make sure to wrap the naan individually and very well with plastic wrap.

Place them frozen in a toaster oven or in a hot oven, directly on the rack, until soft and warm.

What to serve with Naan!

These can be made ahead and frozen, individually wrapped tightly in plastic wrap ( use a double layer). Place them frozen, directly on the rack in the oven or toaster oven until soft and warm.

If using regular, Active Dry Yeast- rising time will increase to 2-3 hours. You will also need to mix the yeast with the warm water and the sugar first, let it stand for 10 minutes until it activates and is frothy, before adding the yogurt and olive oil to it. Continue with recipe as stated.