How to make Naan ( like they do in India!) 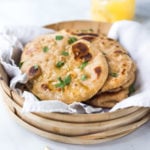 These can be made ahead and frozen, individually wrapped tightly in plastic wrap ( use a double layer). Place them frozen, directly on the rack in the oven or toaster oven until soft and warm.

If using regular, Active Dry Yeast- rising time will increase to 3-3.5 hours. You will also need to mix the yeast with the warm water and the sugar first, let it stand for 10 minutes until it activates and is frothy, before adding the yogurt and olive oil to it. Continue with recipe as stated.