Say hello to your new favorite weeknight dinner! Instant Pot Tikka Masala using chicken breast or thighs, bathed in the most fragrant Indian coconut curry sauce.  Serve with Naan, over basmati rice, or, for a low-carb version, serve over a bowl of baby spinach! This can also be made on the stovetop! A fast and easy weeknight dinner that is bursting with flavor!

Good morning friends! Here’s another quick and easy Indian-inspired weeknight dinner that can be made in an Instant Pot or on the stovetop!  Instant Pot Tikka Masala! This version is made with coconut milk instead of yogurt to keep it dairy-free.

Make this with chicken breast or thighs-  or keep it vegan and substitute chickpeas and veggies. Either way, I know you will love it.

This recipe is all about the sauce – so fragrant and flavorful it will leave you wanting to mop up every precious drop. It’s so addicting!

What to serve with Tikka Masala?

Naan bread works well or keep it simple with a bowl of fluffy basmati rice, or a bed of baby spinach – a delicious, low-carb option.

Here is the vegan version of the Instant Pot Tikka Masala, with chickpeas and veggies, which only takes 5 minutes of pressure cooking time! And, of course, feel free to cook it on the stovetop.

I love both versions of this Instant Pot Tikka Masala!

You could even add some veggies to the chicken version, but I would add them after you release the pressure, on the sauté function, because they cook so quickly! 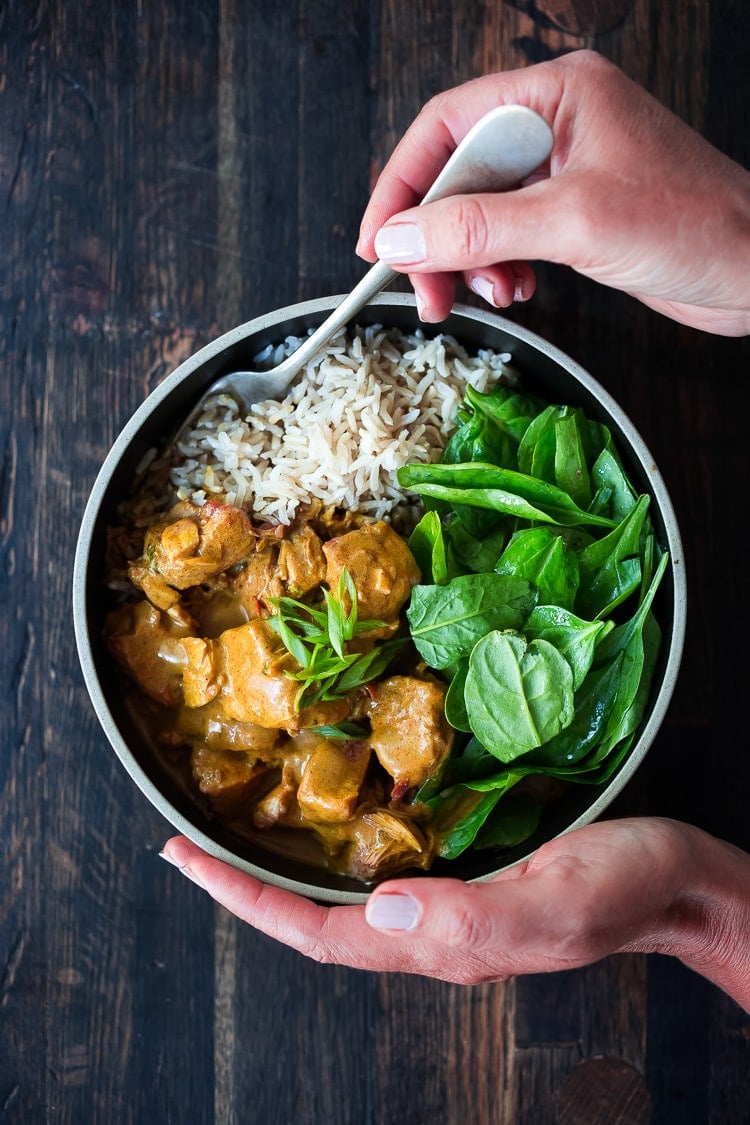 The flavorful Tikka Masala Sauce is made with coconut milk instead of yogurt or cream. 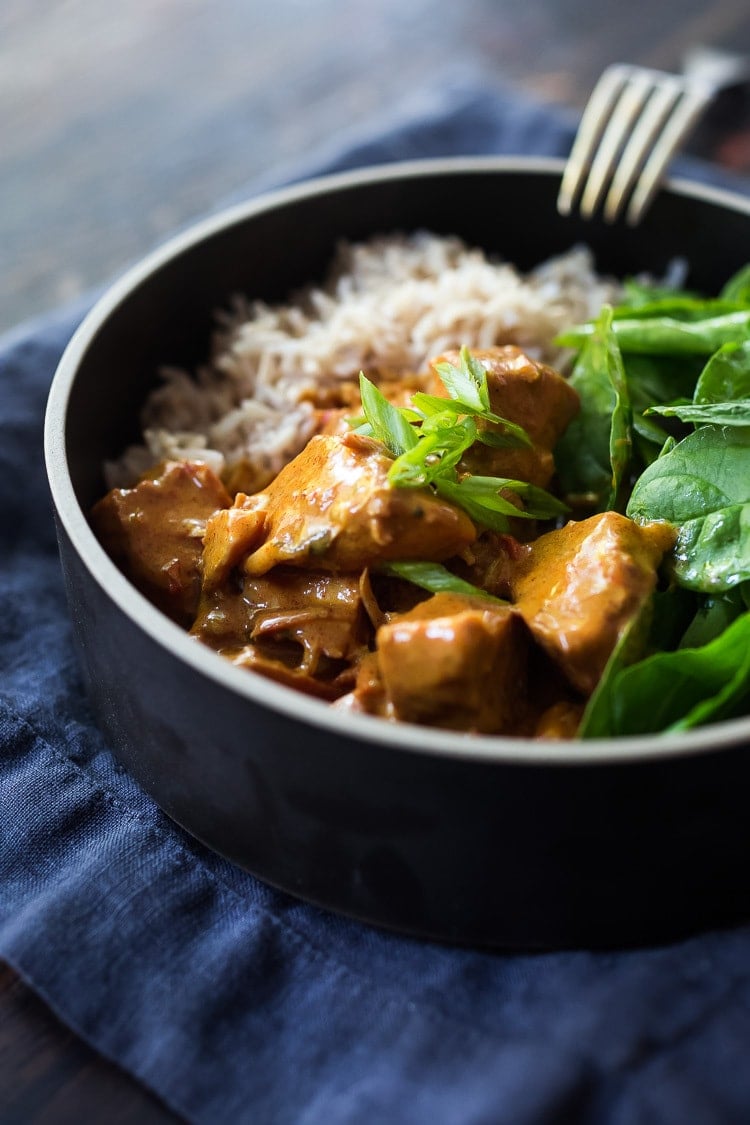 A cozy weeknight dinner, Tikka Masala is perfect for the cool nights of fall. AND oh yes, the leftovers are divine, so pack some up for midweek lunches!

This could also be part of your Sunday meal prep! It tastes better and better as the flavors have a chance to meld.

Give this Instant Pot Tikka Masala a try this week – and let me know what you think in the comments below.

Cut chicken into cubes and sprinkle with 1 teaspoon each, salt and pepper and set aside.

Saute shallot, garlic and ginger in oil until fragrant, about 2-3 minutes. Add whole spices ( cumin, fennel and mustard) and the chicken, and add a little color to the chicken, about 5 minutes. Add tomatoes and their juices  and remaining spices and salt and sugar. Add 1/2 cup broth, and scrape all the brown bits -to prevent the burn error. Add 1/2 cup of the liquid part of the coconut milk, saving the thick cream for the end. Give a stir.

Set the Instant Pot -if using chicken breast, to pressure cook on high for 7 minutes (9 minutes for chicken thighs) and manually release (throw a kitchen towel over the steam spout). Open the pot.

Turn instant pot back to saute function, and reduce the liquid by half. (At this point you could toss in some quick-cooking veggies- frozen peas, snow peas, bell pepper, baby spinach, etc.) Stir in the remaining coconut cream.

Adjust salt and spice level to your liking. Feel free to add more garam masala to taste, or cayenne if you need a kick of heat. If serving over rice, I like to “up” the salt a bit as the rice will soak it up.

As usual, with pressure-cooked meats, this will taste much better after the chicken has time to soak up the flavor.

If making the VEGAN VERSION – Saute shallot, garlic and ginger in oil until fragrant. Add all the spices, sauce 1-2 more minutes, letting them toast. Add the tomatoes and coconut milk. Add the sugar and salt. Add the drained chickpeas, potatoes  (or cauliflower) and red bell peppers, and give a good stir. Pressure cook on high for only  5 minutes! Manually release to keep veggies from getting too soft. Set Instant Pot to “saute” function, add peas and let them cook five minutes. As the sauce cools, it will thicken.

If cooking chicken version on the stove top, heat oil in a large Dutch Oven. Saute onion, garlic and ginger in oil, until fragrant, about 2 minutes, over medium heat.  Brown the chicken lightly, sauting and stirring for a few minutes. Add all the spices to the chicken, cook for 1-2 minutes. Add tomatoes and coconut milk. Give a good stir and add the salt and sugar. Simmer gently on medium heat until chicken is cooked through, about 15-20 minutes.

If cooking Vegan Version on the stove top, heat oil in a large Dutch Oven. Saute onion, garlic and ginger in oil, until fragrant, about 2 minutes, over medium heat. Add all the spices and lightly toast. Add tomatoes and coconut milk. Stir and salt and sugar. Add the drained chickpeas and potatoes. Simmer gently on medium heat uncovered, until potatoes are tender, about 1o minutes, then add bell pepper and peas. Simmer 5 more minutes.