Creamy Mushroom Soup with Garlic Chips and Rosemary  – a delicious easy recipe that comes together in 30 minutes – perfect for special gatherings or simple enough for weeknight dinners! Vegan-adaptable, Keto and GF adaptable! 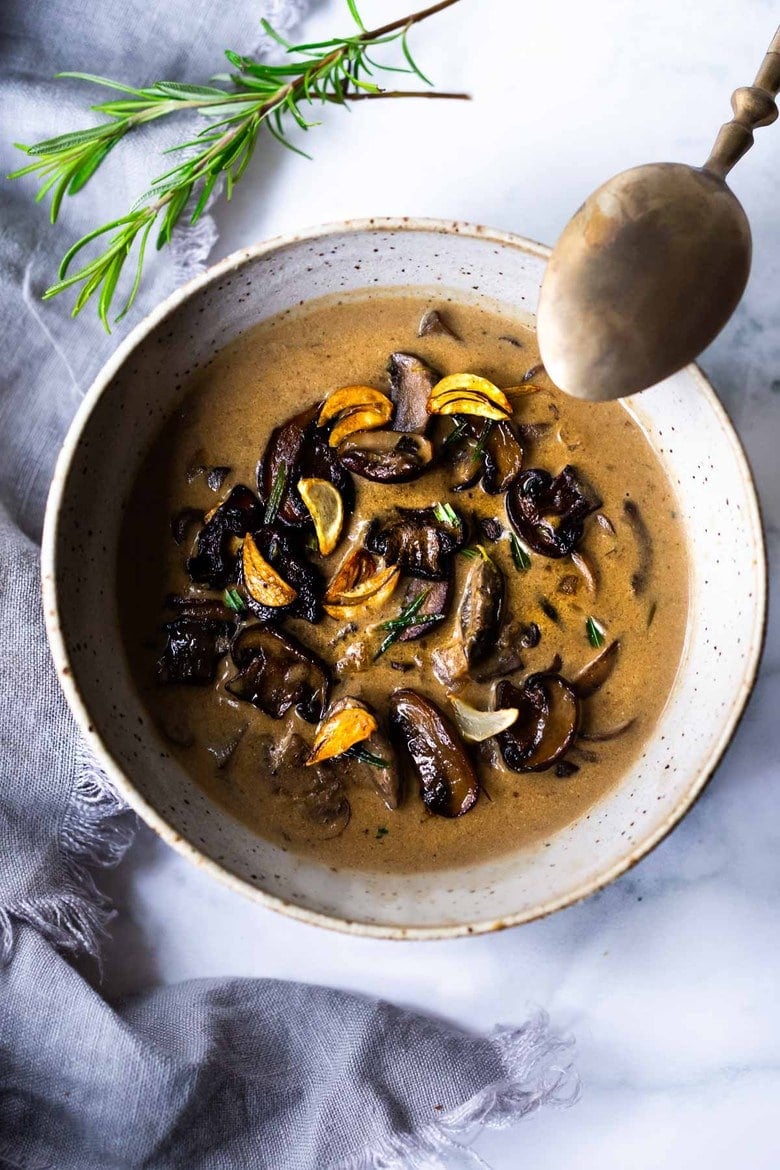 What is more nourishing than a warm bowl of soup on a chilly night? This recipe for Creamy Mushroom Soup is very simple to make yet deeply satisfying.  Rosemary and garlic “chips” are added to the mix for beautiful flavor and texture.

Over the last few months, we’ve had this many times, and I have to say, it’s pretty darn yummy! So much depth and flavor here! There are lots of ways to adapt this to your needs so be sure to read the recipe notes. Yes, it can be made vegan!

What I like about this recipe is, how easy it is to make and how there is no blending required. Just whip it up in one pot. Serve with a good loaf of crusty bread or some sourdough croutons and dinner is ready in under 30 minutes! And it feels luxurious.

One of my husband’s favorites!

You could also serve this as a first course for a special gathering or plated dinner.

I love garnishing the soup with crispy garlic chips for added texture and flavor. A drizzle of truffle oil further elevates. Of course, both are optional.  😉 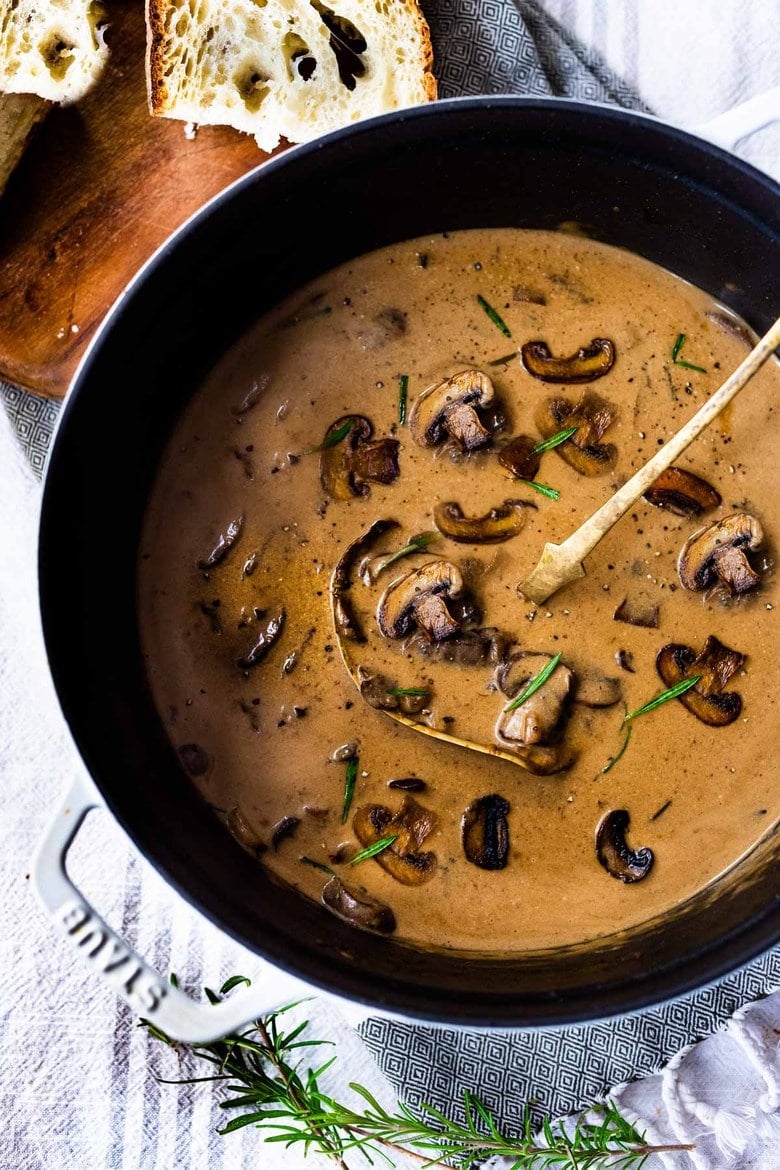 How do you make mushroom soup from scratch?

The trick to getting the beautiful depth and flavor here is really taking your time to cook the onions and mushrooms. 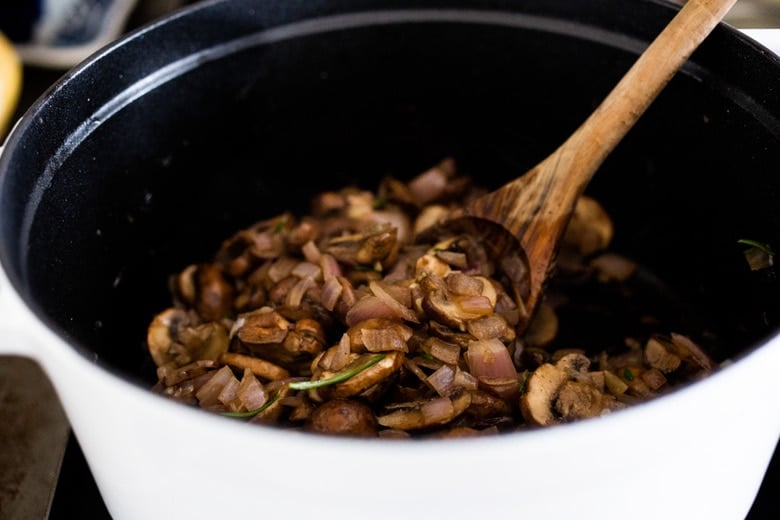 Cook them until all of the liquid releases.

Here I’ve added rosemary, but fresh thyme or Sage would work well too.

What Mushrooms to use in Mushroom soup?

As far as mushrooms, feel free to use any of the following or a combination: button mushrooms, cremini mushrooms, portobello mushrooms, shiitake mushrooms, or even wild mushrooms like chanterelles, porcini mushrooms or morels. Adding some dry mushrooms to the mix will add another layer of flavor but I would hydrating them first.

How to elevate Mushroom Soup:

Adding a little splash of sherry cooking wine elevates-  but don’t sweat it if you don’t have it. Red wine, white wine, Marsala wine, Madeira Wine, Vermouth or Ruby Port will work here too.

But the sherry cooking wine is super tasty. Just be sure you are not using sherry vinegar. 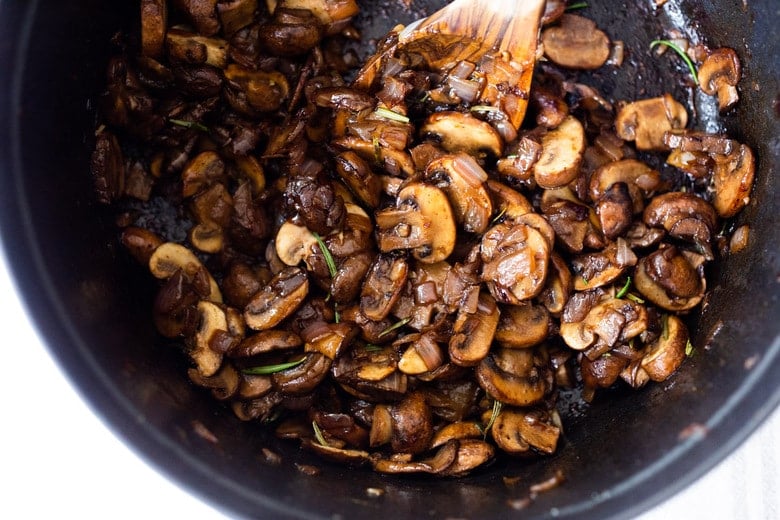 Mushroom soup is typically vegetarian while Golden Mushroom Soup is made with beef stock. Sometimes tomato paste also is added for extra depth.

Can I freeze mushroom soup?

Yes, mushroom soup can be frozen, but preferably without the dairy added. Add the sourcream when reheating the soup. 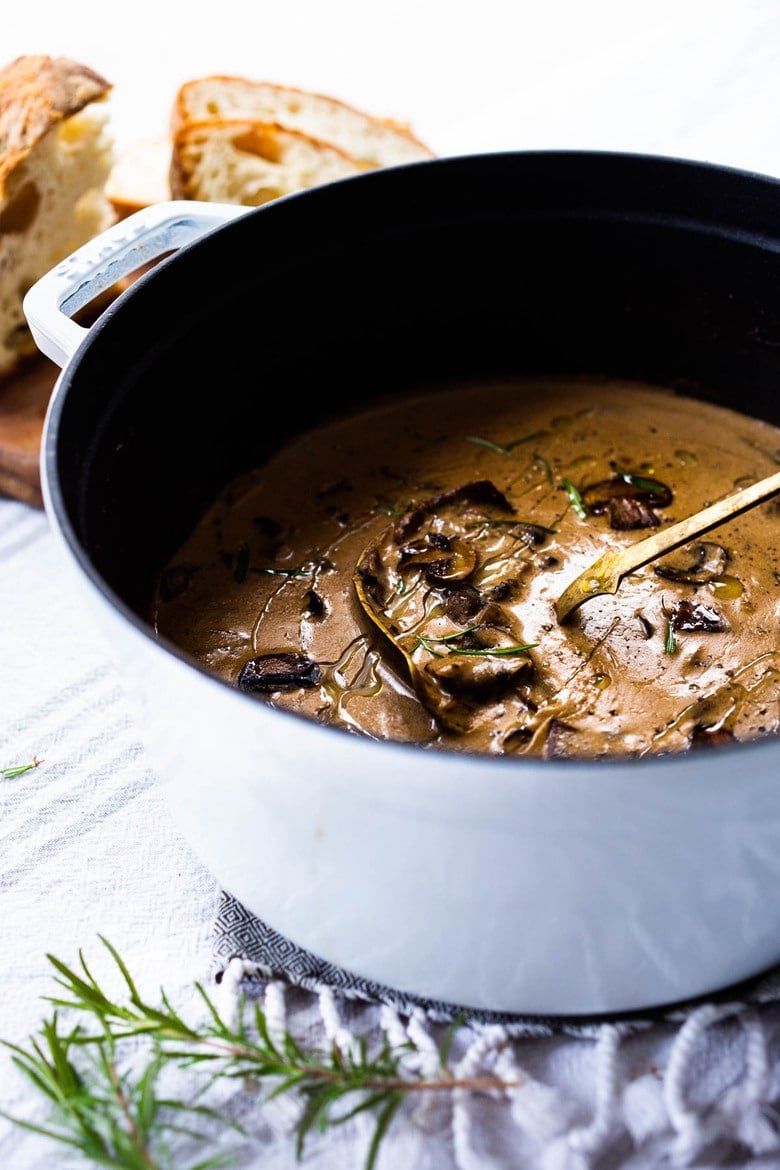 If you would like a silky smooth mushroom soup, feel free to blend this up with an immersion blender.

Truffle oil is a nice addition, but totally optional. 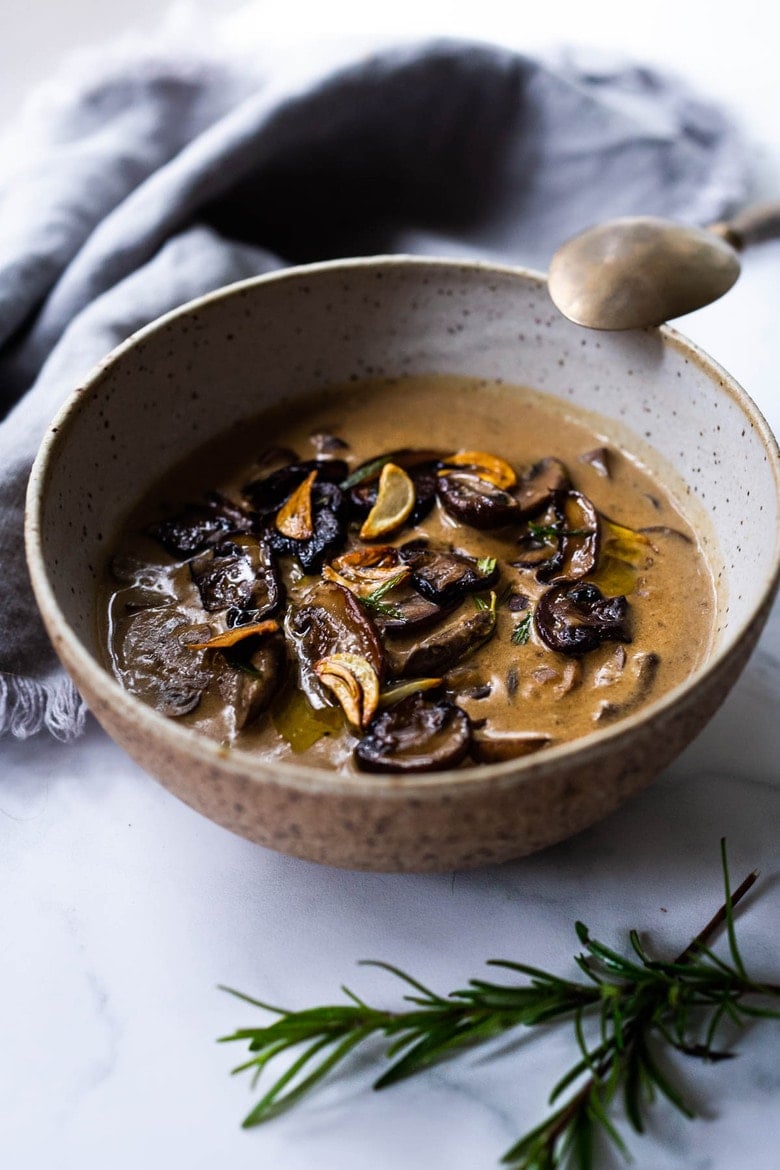 Set aside some of the cooked mushrooms to use as a garnish.

To make the crispy garlic chips- slice garlic lengthwise, then pan-sear until golden- a crunchy flavorful topping. My husband’s favorite! 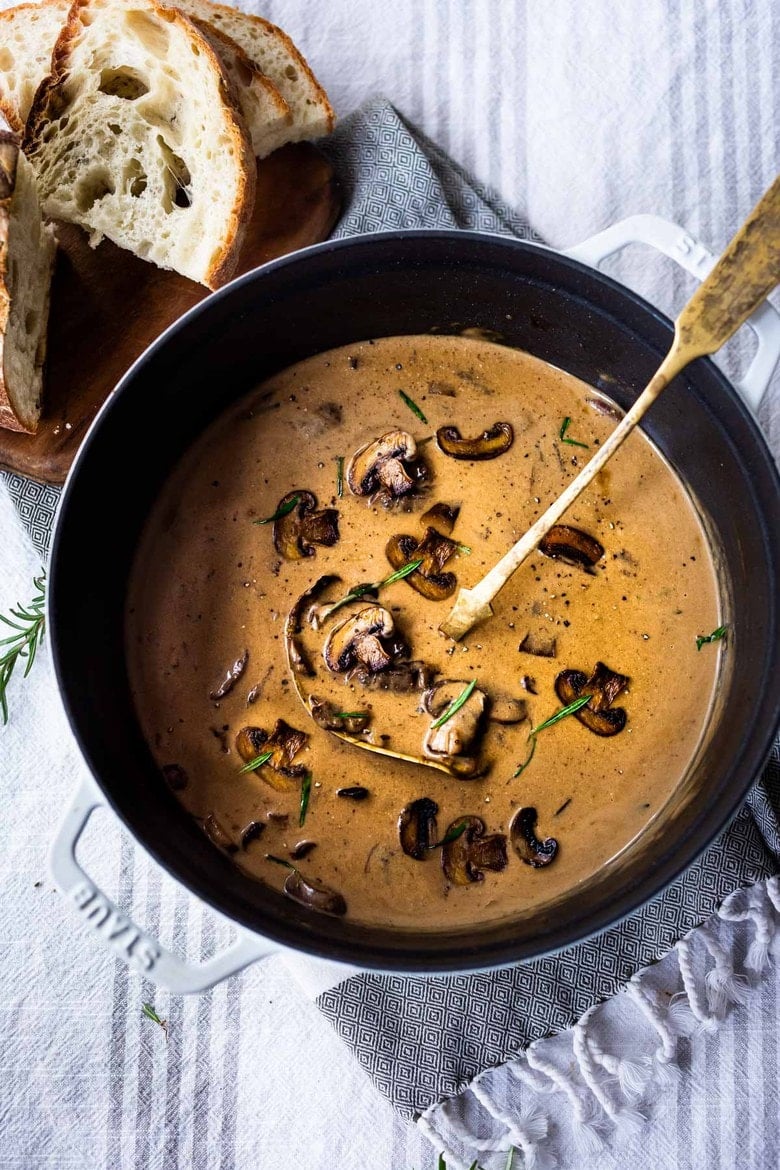 Let us know how you like this Creamy Mushroom Soup in the comments below, noting any of your adaptations! See recipe notes for vegan options!

Creamy Mushroom Soup with Rosemary and Garlic – a delicious easy recipe that is Keto friendly and perfect for special gatherings or simple enough for weeknight dinners! Serve this with crusty bread for a simple hearty meal! GF and Vegan adaptable!

The best (tastiest) version of this soup is using butter and sherry cooking wine. The sherry elevates. It’s still really good with Marsala wine, red wine or even white wine, but tastes best with the sherry cooking wine, adding a complex sweetness that is heavenly.

Though the type of broth or stock is totally adaptable here – chicken broth to me has the best flavor. Or use vegan “chicken” broth. Beef broth adds a delcious depth as well. If going with straight veggie broth, sometimes I’ll add a teaspoon or two of miso to the hot broth for extra depth.

Of course, you can make this vegan with olive oil (or vegan butter) and using a vegan sour cream or cashew cream. If going the cashew cream route, remember that sour cream has a bit of tangy sourness to it, so you may need to add a bit of acid- a few drops of lemon or vinegar to taste. 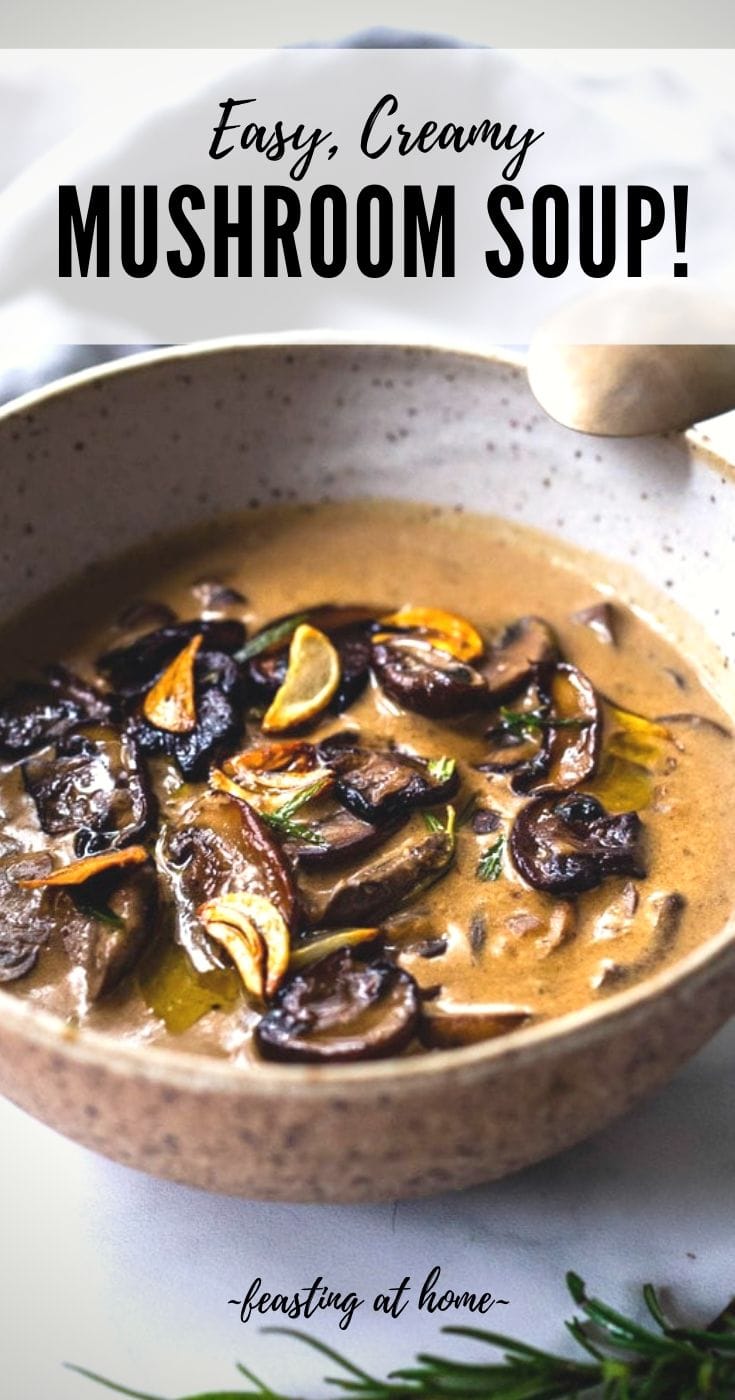