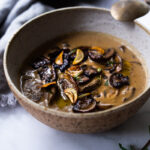 Creamy Mushroom Soup with Rosemary and Garlic – a delicious easy recipe that is Keto friendly and perfect for special gatherings or simple enough for weeknight dinners! Serve this with crusty bread for a simple hearty meal! GF and Vegan adaptable!

Add the sliced mushrooms, salt and rosemary. Saute 10-12 minutes, stirring occasionally, taking your time here, allowing mushrooms to release all their liquid. Add the cooking sherry (do not mistake this for sherry vinegar).  Turn the heat up, and cook this completely off, stirring until most or all of the liquid in the pan has cooked off about 3-4 minutes, and mushrooms glisten.  Optional: Set aside 1/4 cup mushrooms for garnish.

Turn heat back down to medium, sprinkle the flour over top, stir constantly, toasting it for 1-2 minutes. Add one cup of hot stock and stir it in WELL, getting all those browned bits (in corners and bottom) mixed in. (A wood spoon works well here.) Add the second cup of stock, stirring well to combine, then add the third cup of stock and bring it to a gentle simmer. It will thicken slightly.

Stir in the sour cream until fully incorporated.

Season with pepper and taste for salt.

To make the garlic chips, thinly slice garlic (the long ways). Heat 2 tablespoons oil in a little saute pan over medium heat. Add the garlic slices, not overlapping, sprinkle with a little salt, and turn over when golden, about 3 minutes.  Cook other side until golden and crispy. Set on a paper towel. At the same time you could toss in a few more rosemary leaves.

To Serve: Ladel in bowls and top with a few slices of mushrooms and garlic chips and a drizzle of truffle oil. Serve with crusty bread.

The best (tastiest) version of this soup is using butter and sherry cooking wine. The sherry elevates. It’s still really good with Marsala wine, red wine or even white wine, but tastes best with the sherry cooking wine, adding a complex sweetness that is heavenly.

Though the type of broth or stock is totally adaptable here – chicken broth to me has the best flavor. Or use vegan “chicken” broth. Beef broth adds a delcious depth as well. If going with straight veggie broth, sometimes I’ll add a teaspoon or two of miso to the hot broth for extra depth.

Of course, you can make this vegan with olive oil (or vegan butter) and using a vegan sour cream or cashew cream. If going the cashew cream route, remember that sour cream has a bit of tangy sourness to it, so you may need to add a bit of acid- a few drops of lemon or vinegar to taste.