Cozy up with a bowl of  Coconut Corn Chowder with Leeks- a simple, comforting meal that can be made in under 30 minutes. Vegan and Gluten-free! 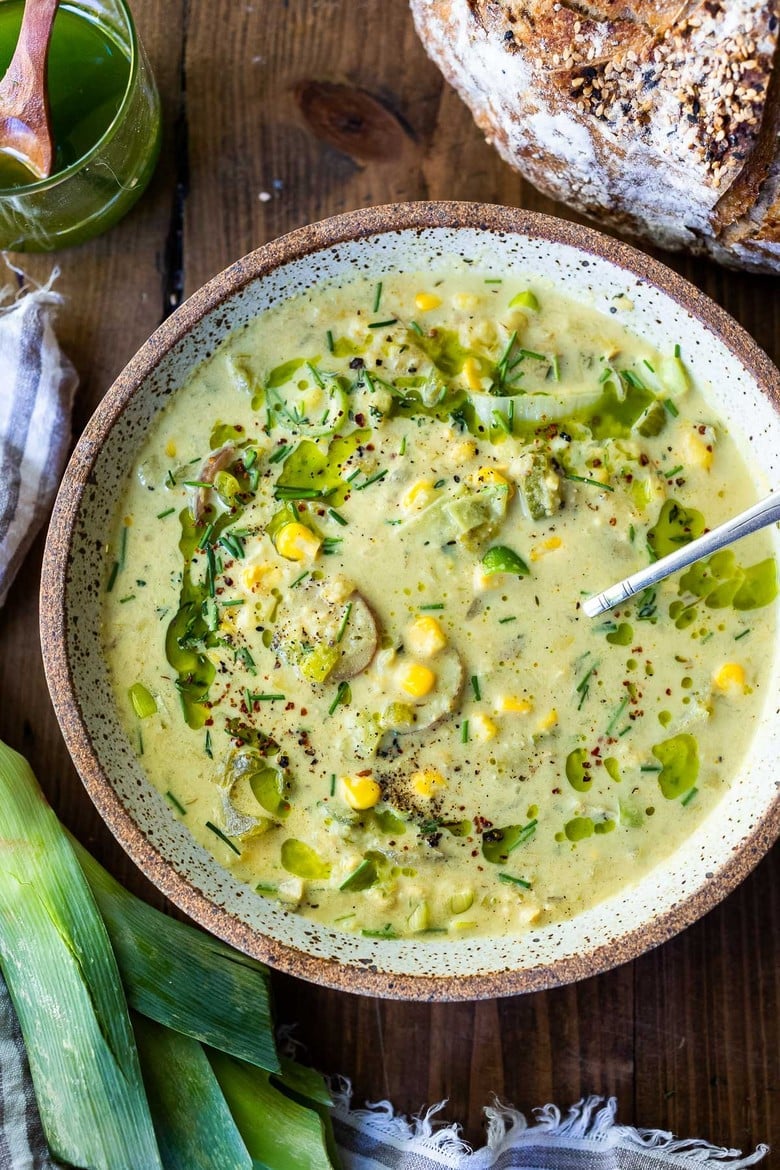 There is an opening in every perceived difficulty through which the majesty of the Divine seeps into our existence. No experience in life, however painful, is ever wasted. ― Panache Desai

This vegan Corn Chowder is so warm and comforting, you’ll want to make it all winter long.  It’s made with melted leeks and coconut milk and if you are feeling fancy, you can drizzle it with the optional Leek Oil– made with the green tops of the leeks. Nothing is wasted.

It is a soothing, gentle soup, mildly-seasoned, yet not lacking in flavor. I found it very comforting this week as the nights cooled off here in our area. Serve it up with homemade bread or croutons and call it dinner. You won’t be disappointed! 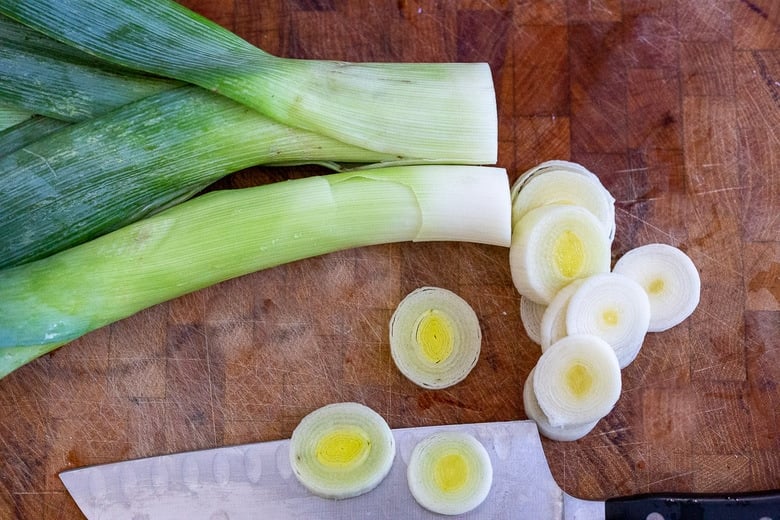 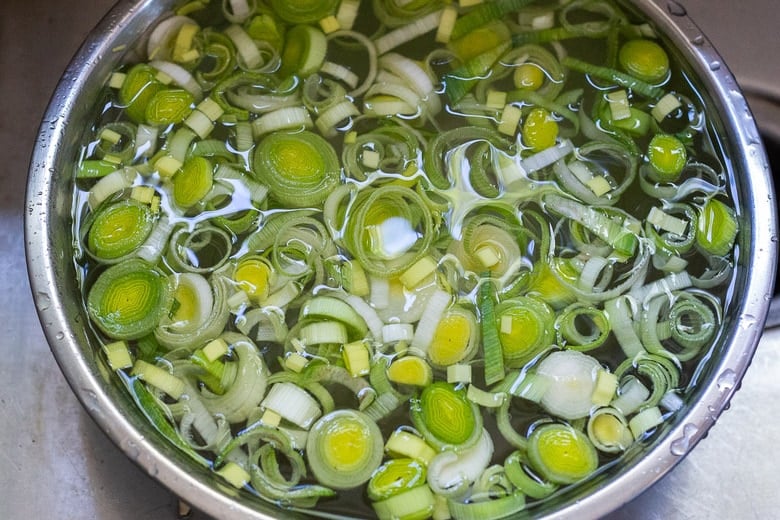 It starts with the leeks. Slice them thinly and soak in a bowl of water to remove dirt and sediment. The water will also help steam them a bit, so don’t skip this step.

Remember to keep the leek tops if you plan to make the leek oil.

Strain the leeks and saute them.

Cover the pan for a few minutes to let them soften. 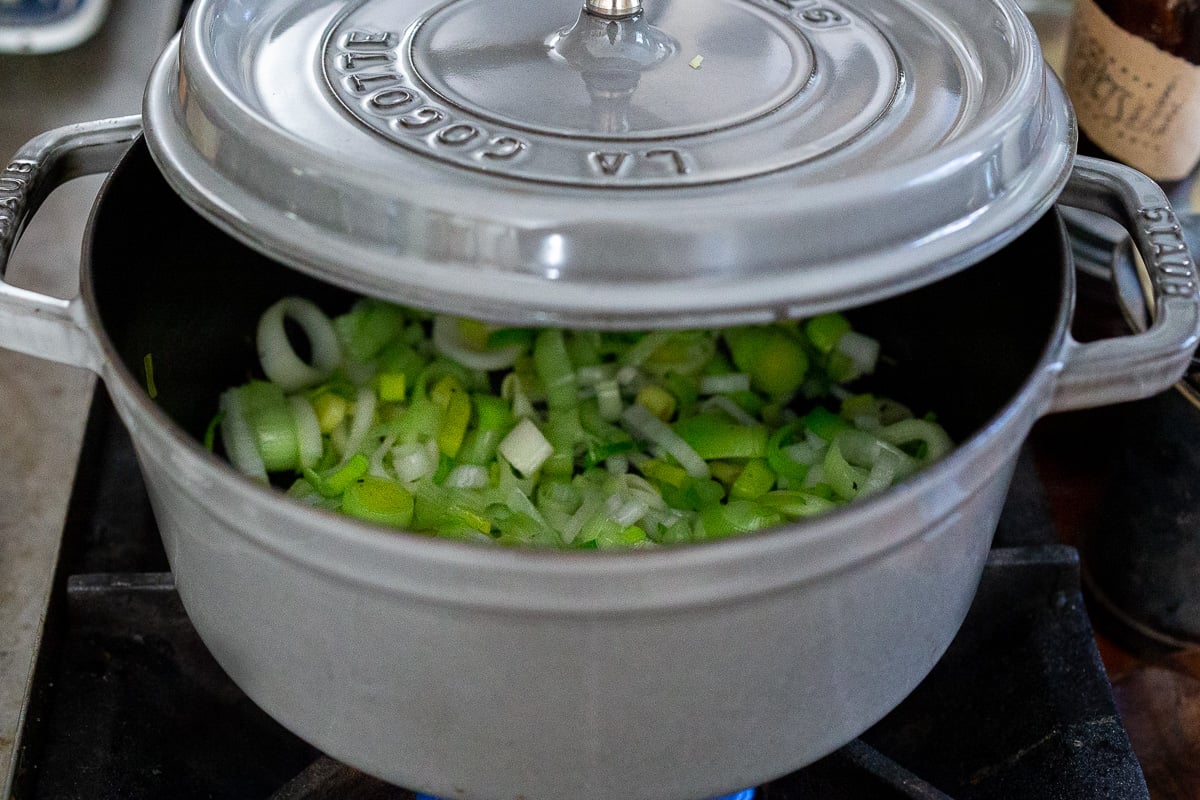 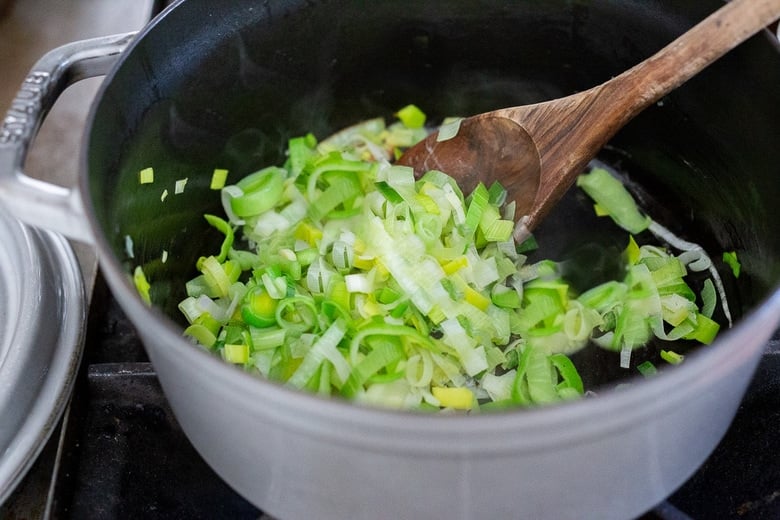 Once tender add the celery, garlic and thyme. 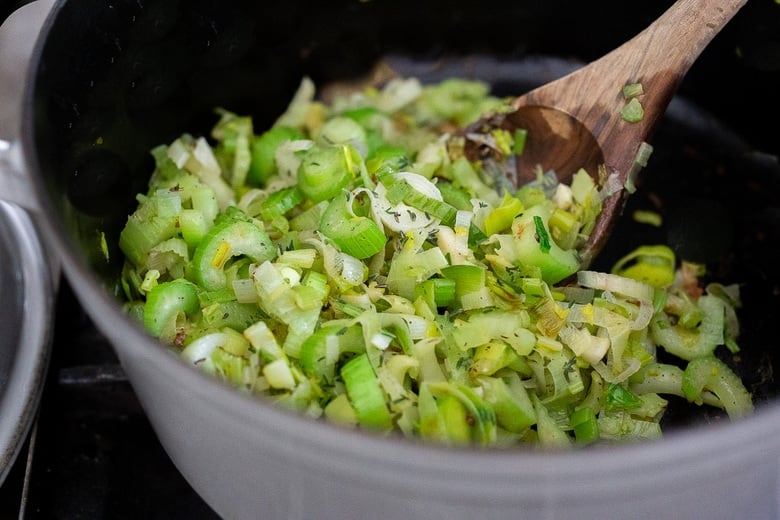 Thinly slice baby potatoes. Slicing them thinly is what helps this soup to made in under 30 minutes. 😉 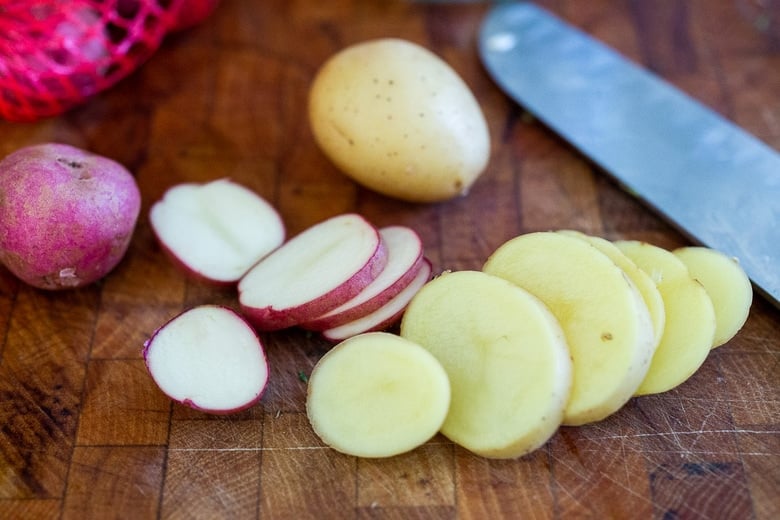 Add the potatoes and corn to the pot and season with salt and pepper. 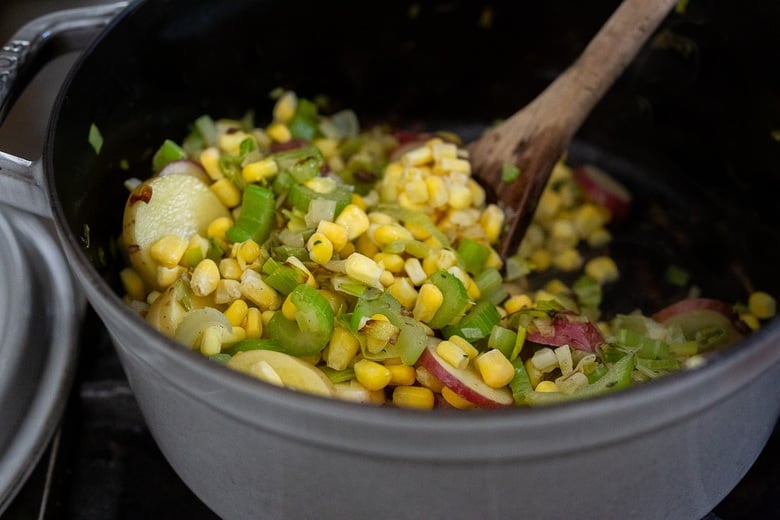 Add water and veggie bouillon.  I really like this Better than Bouillon brand in soups, it really seems to add the BEST depth and flavor. You can also use veggie or chicken stock. 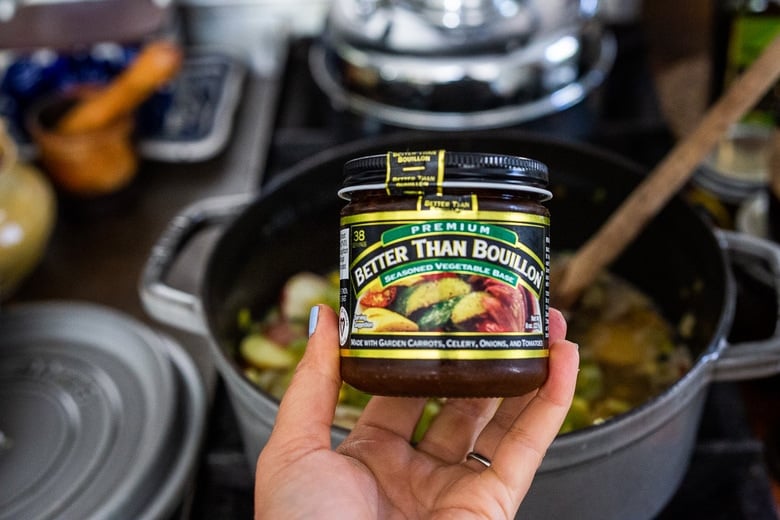 Bring to a simmer, and cover until the potatoes get tender, about 8-10 minutes. 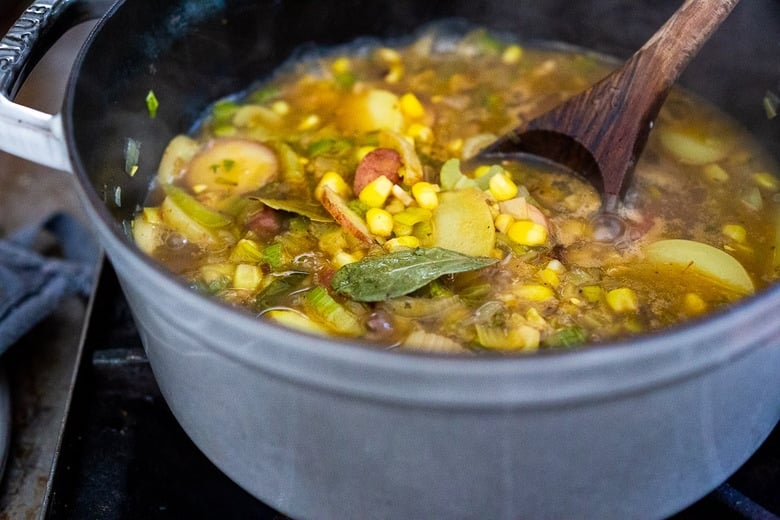 Once the potatoes are tender, remove four cups of the veggies from the soup and set aside. 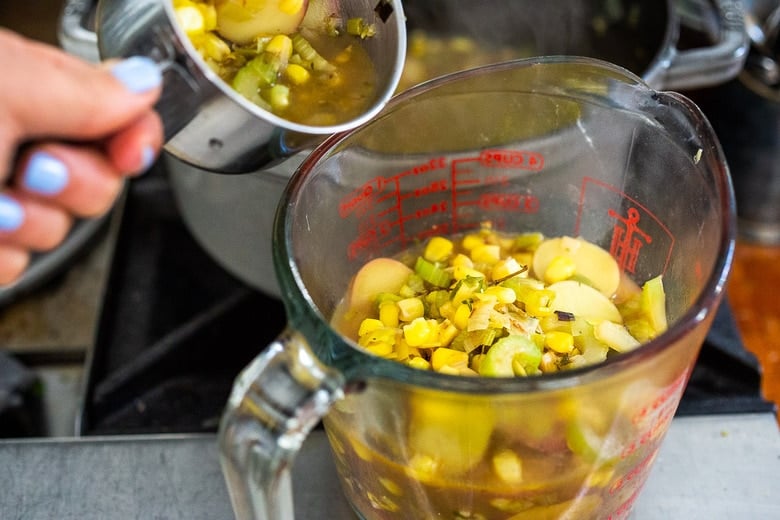 Add the coconut milk to the remaining soup. 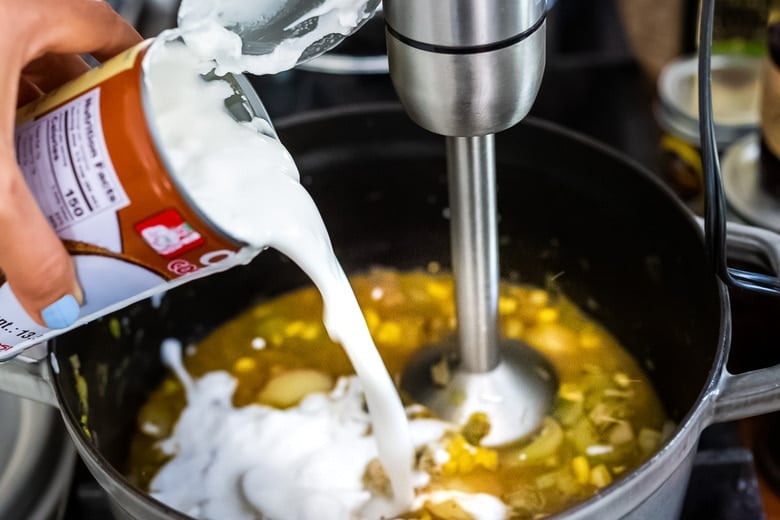 Basically, you are blending half the soup to thicken it instead of adding flour.  You can also use a blender. 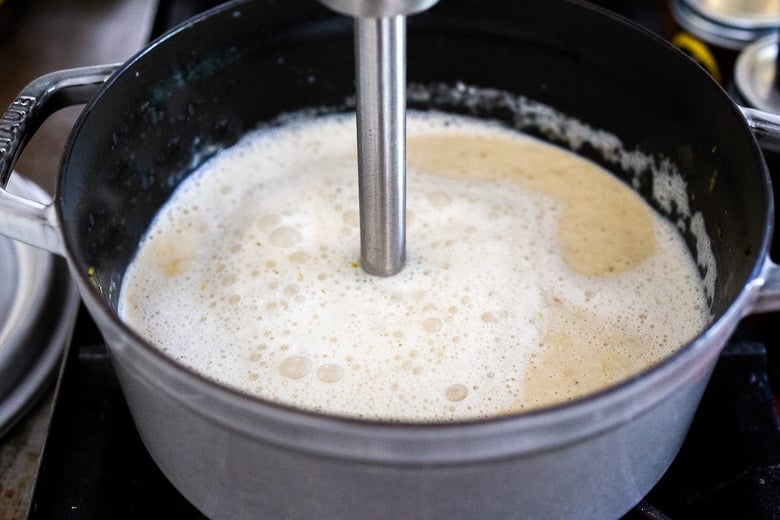 Then pour back the veggies into the pot. 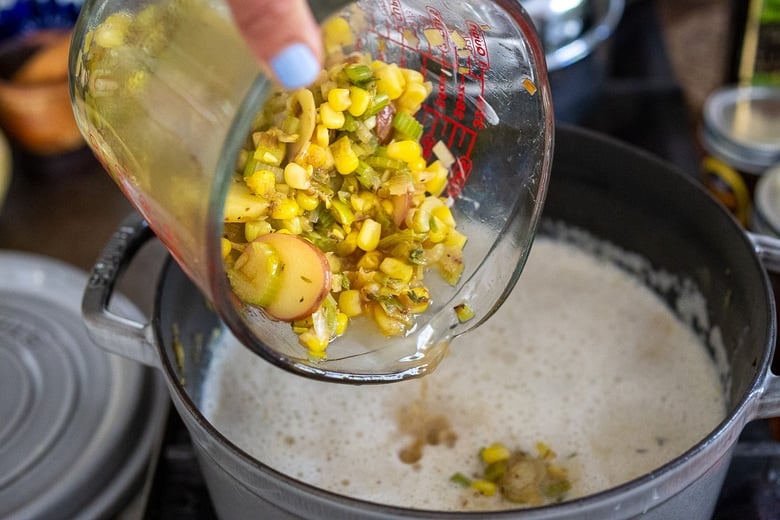 To give a beautiful golden color, add a little turmeric.

It makes the soup “happy” in appearance and you really can’t taste it. 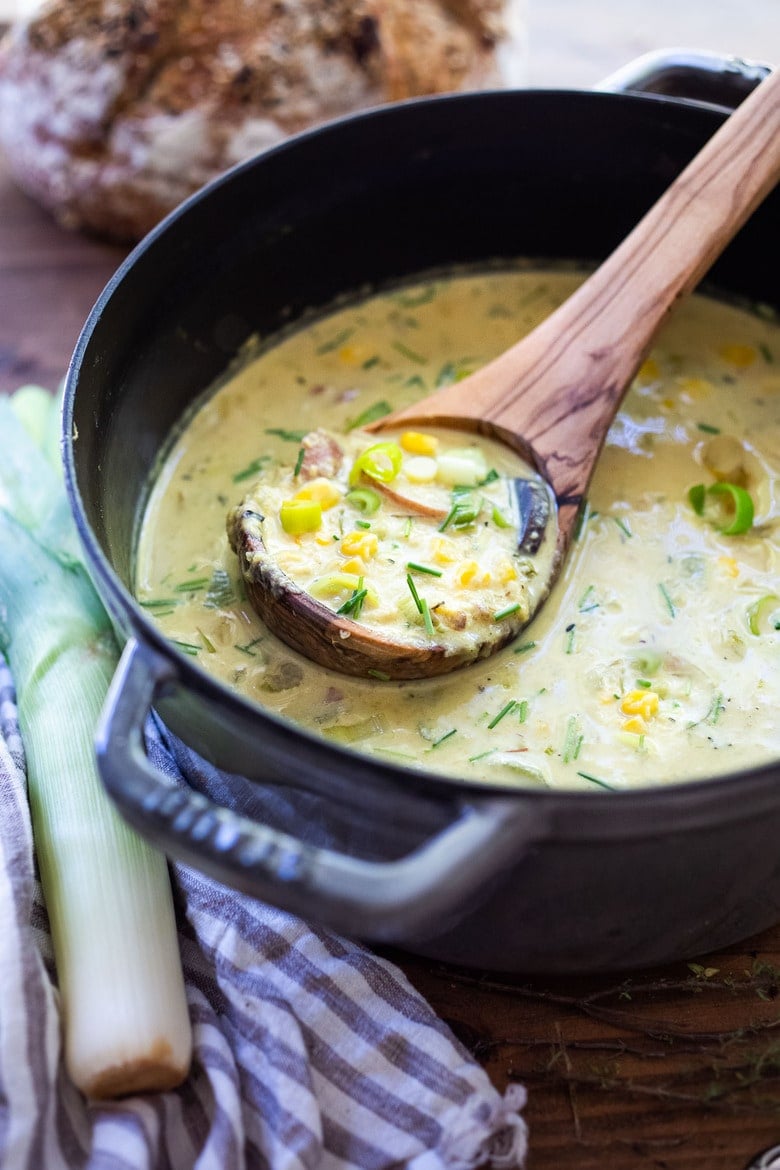 Serve it just like this or with croutons or crusty bread. 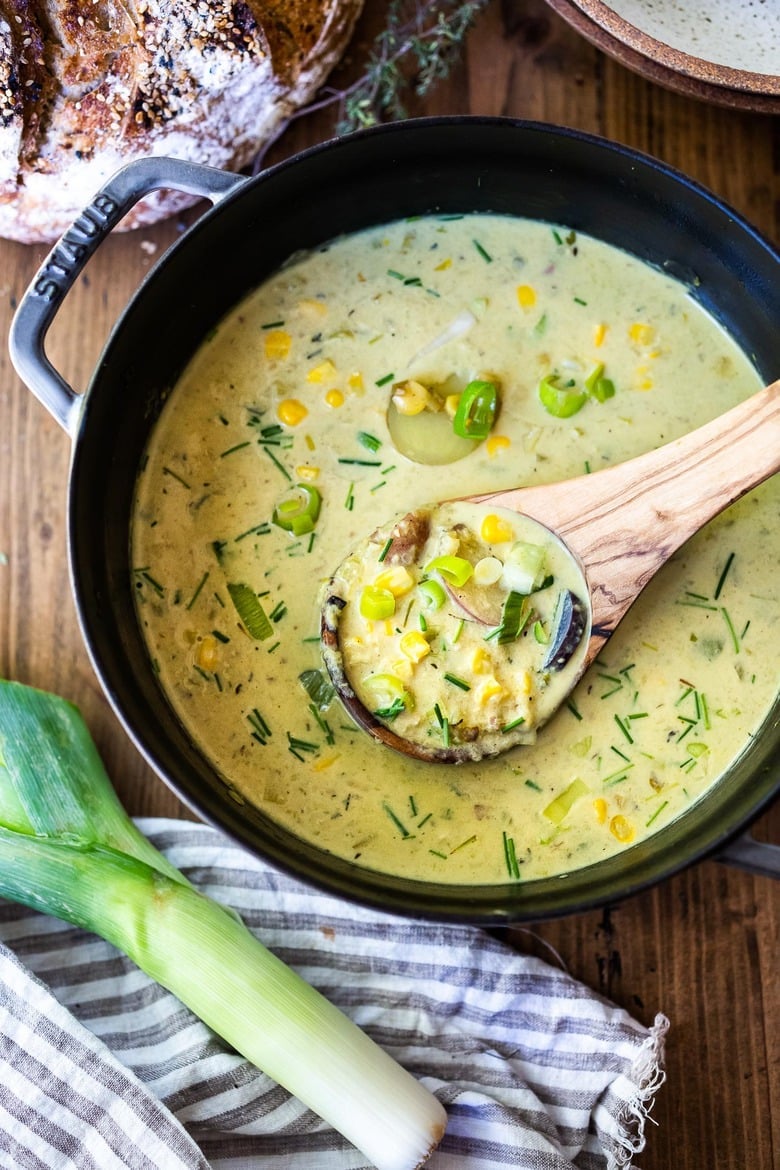 If feeling motivated, make the Leek Oil to drizzle over top. 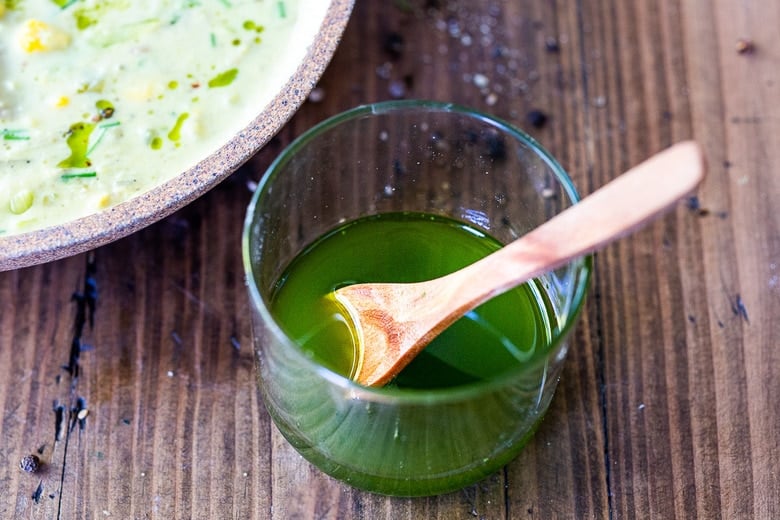 Such a great way to use up those green leek tops! 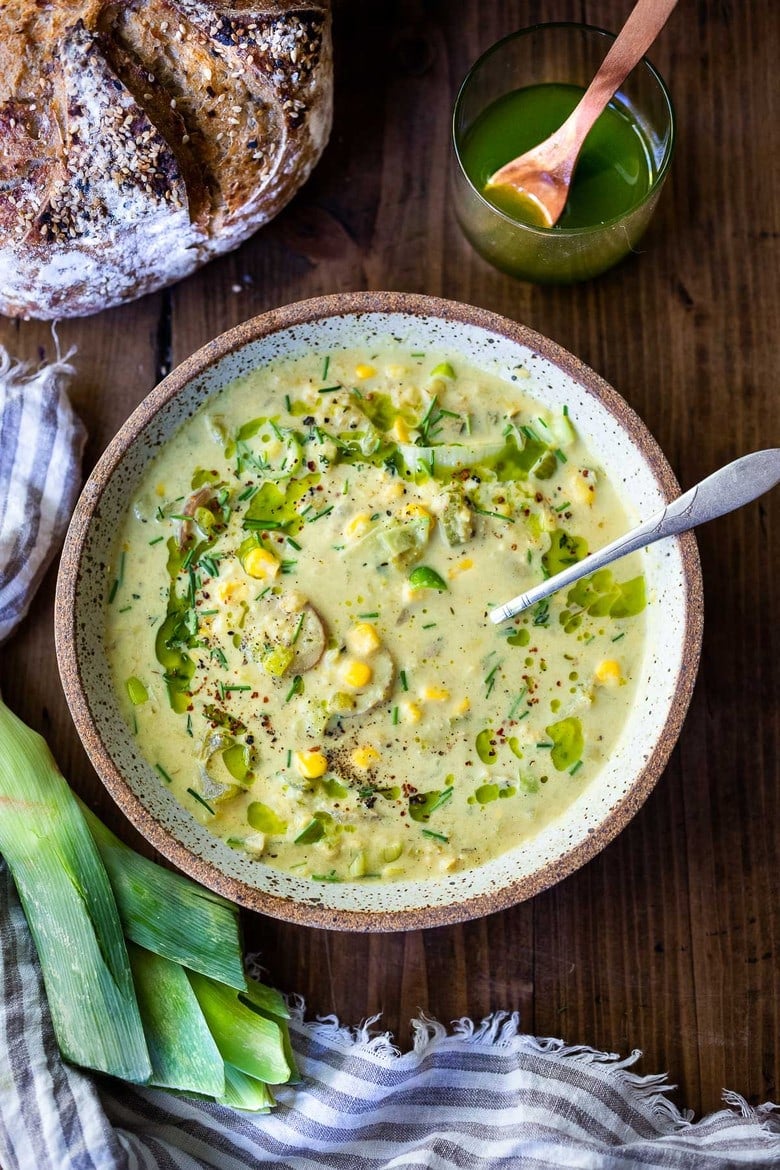 Give this vegan Coconut Corn Chowder a whirl this week and let us know what you think in the comments below.

This Coconut Corn Chowder with Leeks is simple and comforting and can be made in under 30 minutes. Vegan and Gluten-free! Elevate this by making the Leek Oil using the green tops.

Serve with Crusty Bread, or top with croutons and garnish with scallions, chives, or chive oil.

Bring 4 cups of water with 1 teaspoon salt to a boil in a medium pot. Once boiling add the leek top and simmer for 60 seconds. Add the parsley or chives to the leeks and blanch 15 more seconds. Pour over a strainer and set this in an ice bath for 5 minutes. Blot the leeks and herbs dry with paper towels. Place in a blender with 1 cup oil, making sure your oil is not bitter or overly flavored. A lighter style olive oil works best here. Blend until smooth, scraping down the sides. You could strain this now, or for even more flavor, let this sit overnight before straining. Strain, season with a pinch of salt and store in a sealed jar or bottle in the fridge. This can also be frozen.

Feel free to use veggie or chicken stock instead of the water and bouillon – but I do really recommend this Veggie Boullion- it has the BEST flavor.

Feel free to add shrimp or pieces of salmon to the soup, after its blended, letting it simmer just briefly to cook through.