A delicious summery Kale Salad highlightling fresh summer Cherries with black rice, halloumi & mint. Can be made ahead! Perfect for potlucks and gatherings! 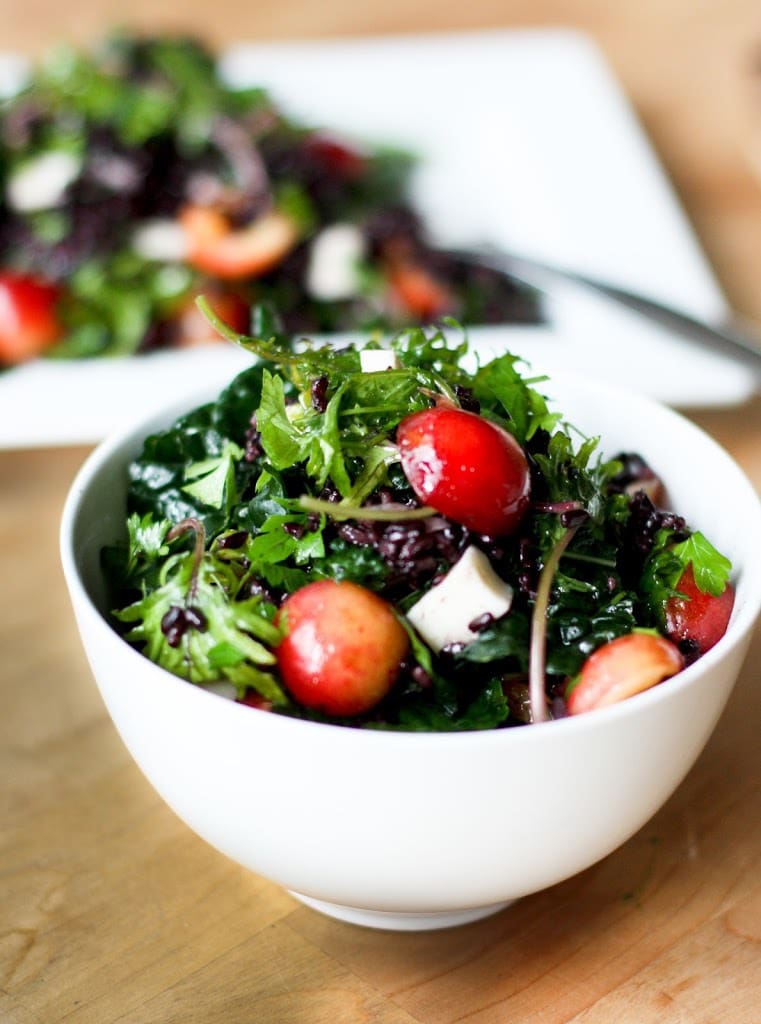 Summer is here in the Northwest, marked by the arrival of cherries. They are lovely with their shiny jewel-colored skins.  For a wonderful month or so they appear, and then before you know it, gone. A short sweet life.  Here they are tossed in a summery Kale Salad along with black rice, halloumi cheese and mint.

What makes cherries so special, so desirable?  During the last years of my mother’s life, she would often call me from Pasadena, to “confess”, obviously feeling guilty, that she purchased another tiny bag of $14 cherries, from Whole Foods, and preceded to devour them all in 10 minutes.
I could hear the bubbling delight in her voice over the phone, masked by a tinge of guilt over the cost. Being frugal the whole of her life, this was a luxury, one that needed justifying. By the end of the conversation, (and like I mentioned, this same conversation occurred repeatedly, several times a summer,  and over several summers) I would talk her down, easing her guilt. Eventually, she would feel some reassurance that this was, in fact a very reasonable purchase.
After all, anything that could give her that much delight, was, as Visa so perfectly put it…. priceless.
To this day, I can not look at a cherry without picturing her devouring them … and feeling a little of the pure delight it brought her. 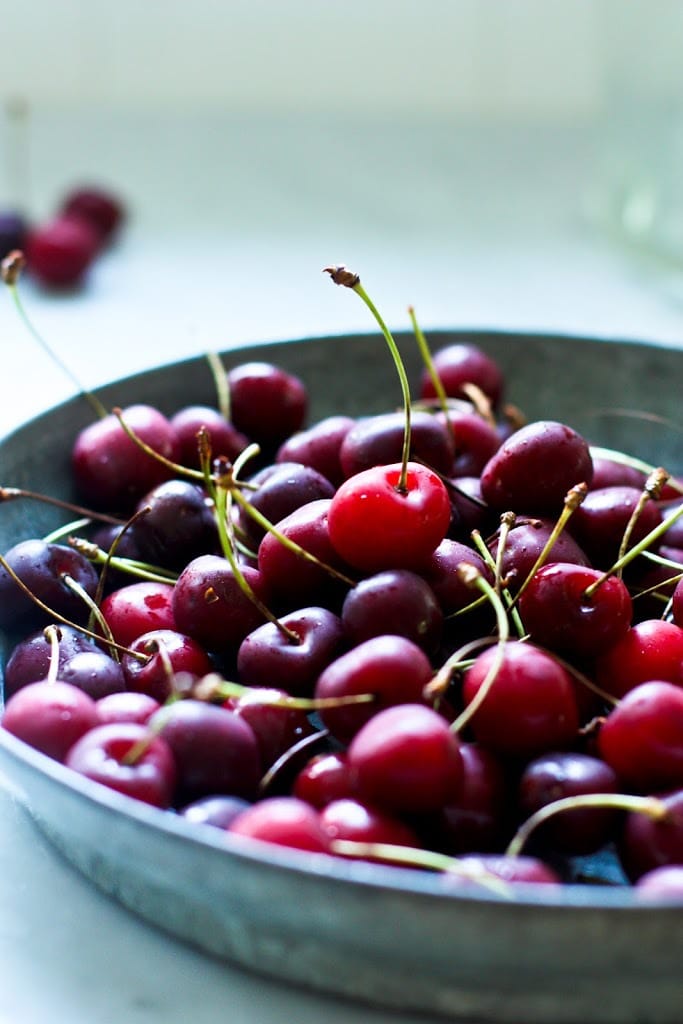 I broke down and bought a cherry pitter last week.  I’d never used one before, but after trying to pit cherries in all sorts of destructive ways, it became clear that it was probably a good investment.
Cherry pitter in hand, I tried a go of it. The pits came out easily and quickly, leaving the beautiful little gem intact.  At the rate I was going, it took about 10 minutes to pit 3 cups. It’s easy and faster than I imagined and in a way, strangely gratifying. Definitely, a more respectful way to treat a cherry. 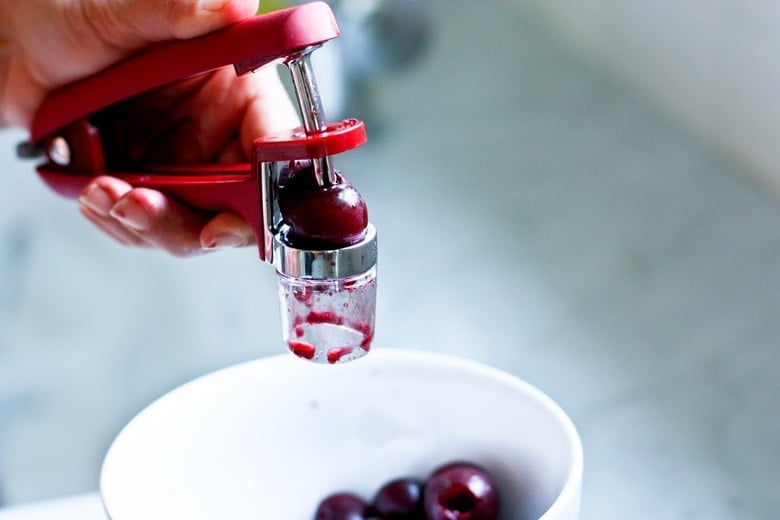 Cherries are packed with good things. They are rich in pigments, or anthocyanins, (red, purple and blue pigments found in many fruits and vegetables, especially concentrated in their skin) known to have powerful antioxidant properties. Studies have shown that anthocyanins in cherries have amazing anti-inflammatory properties.

Consuming cherries or cherry juice can help with painful episodes of gout, arthritis, fibromyalgia, and even sports injuries.  Studies also suggest that tart cherries can help our body to fight against cancer, aging, neurological diseases and pre-diabetes. They are rich in melatonin, producing soothing effects on the brain, by calming down the nervous system, easing irritability, helping with insomnia and even soothing headaches. 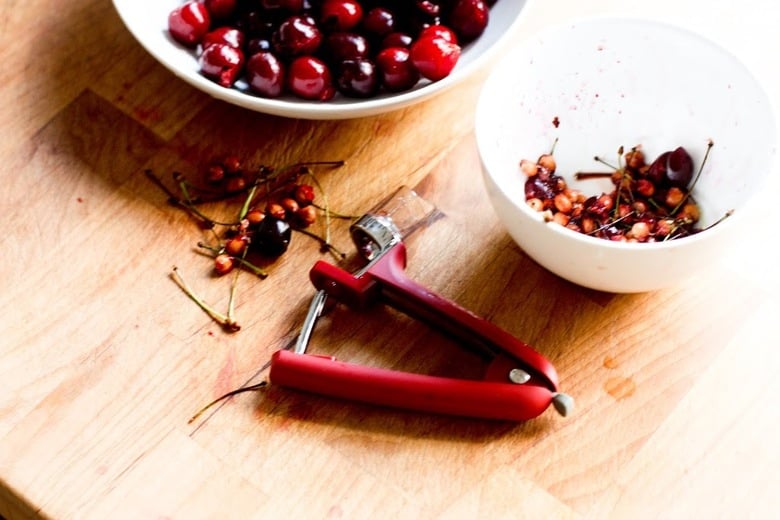 There are many varieties of Cherries but probably the most popular are the deeply colored Bing Cherries, named after a Chinese orchard foreman who helped create the crossbred graft in the late 1800’s.
Rivaling the Bing’s in popularity is the Rainer Cherries, named after our very own Mt. Rainer, with their glossy yellow and red sherbet-colored hues. Rainer’s have a creamy yellow flesh, with an amazingly sweet flavor. Over the last 15 years, the Rainer market has exploded and they have become in highly desirable worldwide.
They were created right here at WSU in the 1950’s and are primarily grown in the Northwest, with Washington State being the highest producer. They are a difficult and risky crop to grow, because of their fragility, easy bruising, and short growing season. They are difficult to pick and hard to pack because of their delicateness. Because of this, their prices are considerably higher. But boy are they delicious. 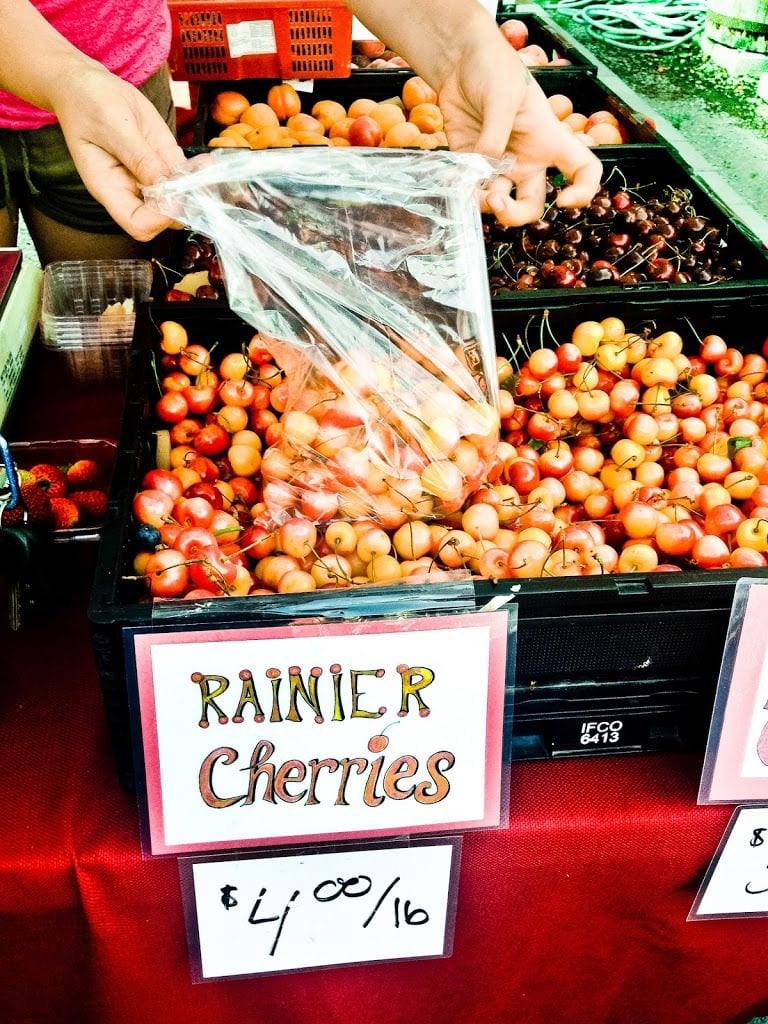 When working with cherries, make sure to give them an extra good washing. Birds really like to hang out in cherry trees.
Gluten-free and vegetarian (and could easily be made vegan), this ultra nutritious black rice, kale and cherry salad is addicting.

The salad starts with cooking your rice. I learned something new the other day from my South African massage therapist. You can cook rice like pasta. I always thought you had to have the perfect amount of water to rice ratio (this how my mother did it).  She told me while under her hypnotic massage spell, if you cook rice like pasta, and drain the rice when it’s perfectly al dente, this makes the rice hold up a little better in a salad.

She could have pretty much told me anything at that point and I would have believed her. So for this recipe, I cooked the rice this way….. and it worked great. What can I say, you learn something new every day. 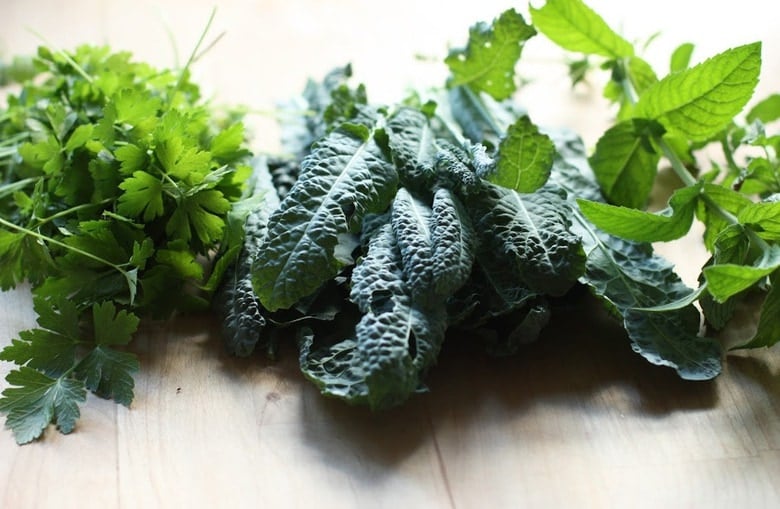 Today I’ve used a mix of lacinato kale and baby kale. Massaging the kale beforehand with a little oilve oil and salt tenerizes it. 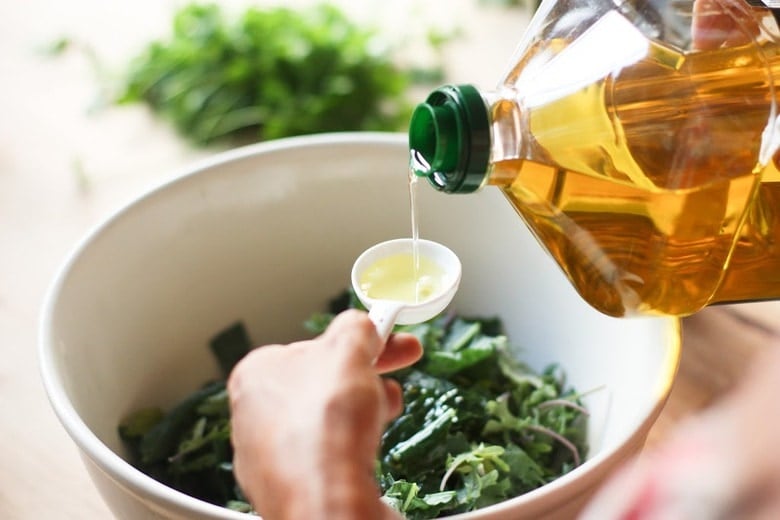 Massaging Kale is easy. Pour in a little oil, a little salt and start rubbing the leaves with your fingers. You will feel the kale begin to become pliable and tender. This takes about 3-5 minutes. 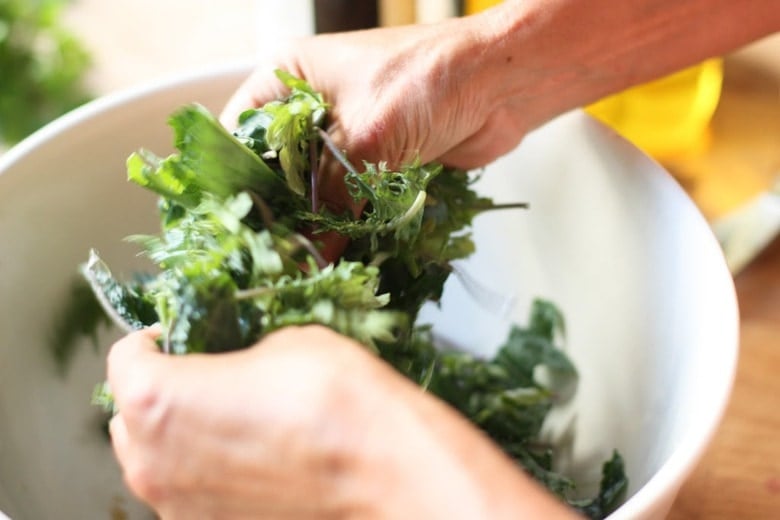 For this salad, I used the Rainer cherries, but really any variety would work.

Its easiest if you pit them with a cherry pitter. You can try cutting them off the pit, but it leaves precious cherry bits behind.  But in a pinch, it will work. Cut the pitted cherries in half. 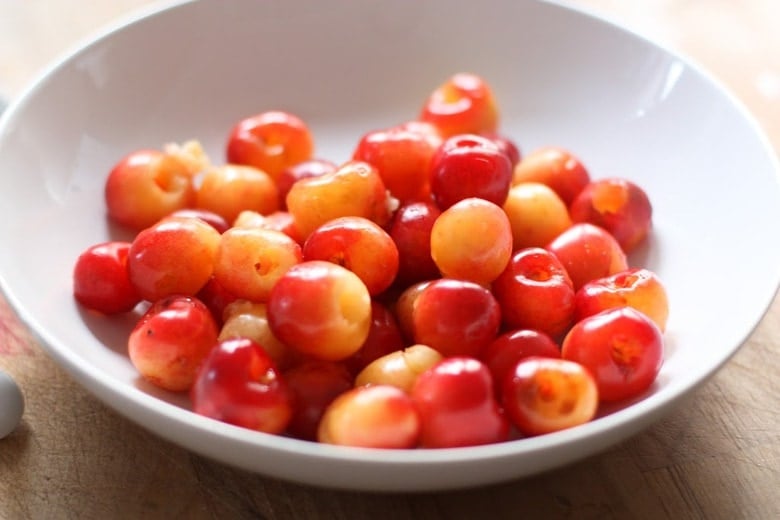 Toss your perfectly cooked, strained and cooled black rice in bowl with the massaged kale, pitted and halved cherries, finely diced red onion, and herbs. You could stop at this point and keep it vegan (and maybe adding slivered almonds).

Or…if you haven’t tried Halloumi cheese yet, this is a good excuse to buy some. It has a firm texture with a delicious, slightly salty flavor. It is made from sheep’s milk, so those of you who dislike the taste and smell of goat cheese, will not find this off-putting.  It is not a crumbly cheese like feta and needs to be cut with a knife. It holds up really well in salads and I have really come to love it.  And just a heads up, it does not melt, so not a good choice for recipes that require melting ( like a quesadilla for example). 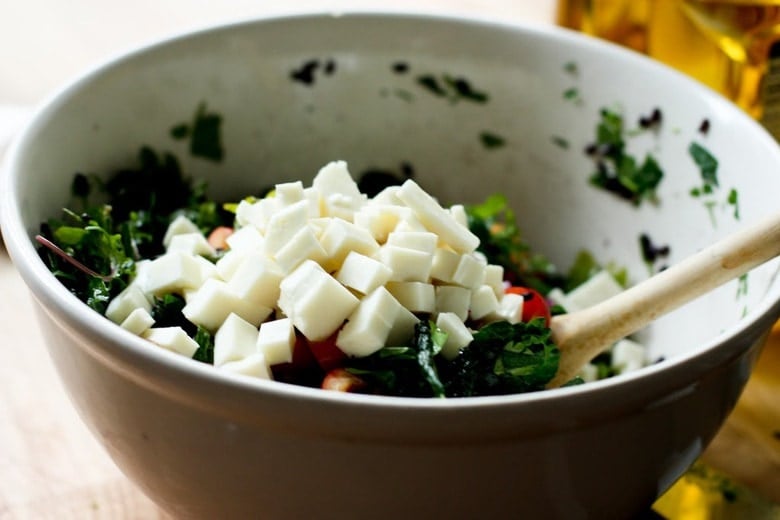 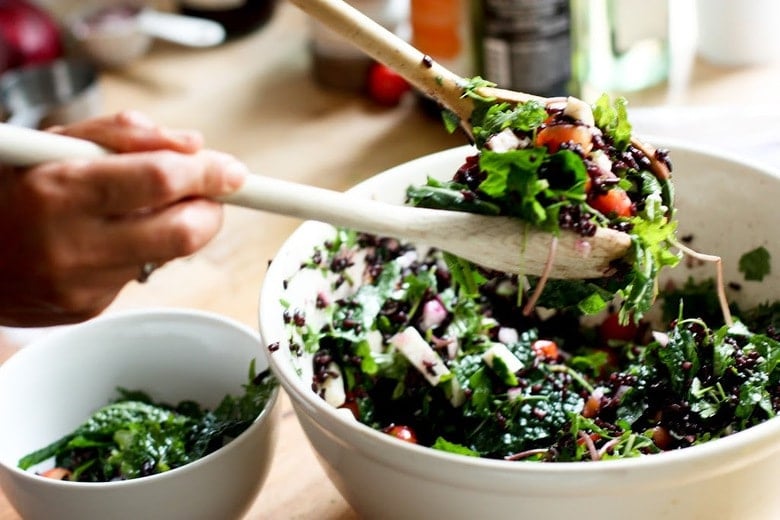 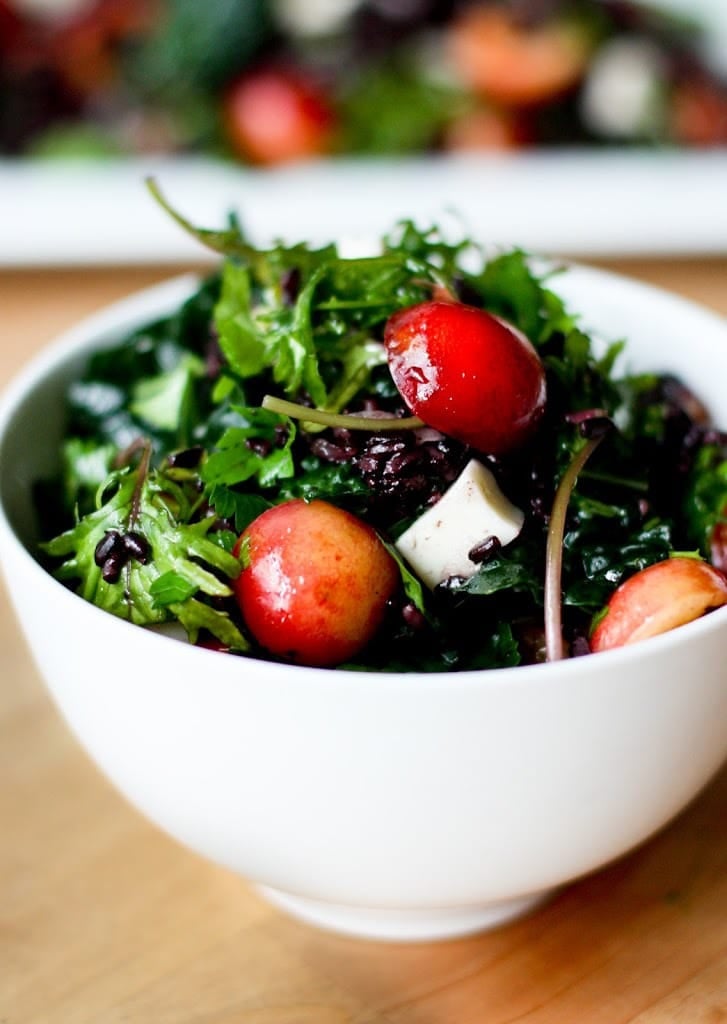 There is a line in Mary Oliver‘s famous poem, The Summer Day, which comes to mind. Doesn’t everything die at last, and too soon? She too must have been thinking about cherries!
I hope you enjoy this Kale Salad with Cherries, black rice, Mint and Haloumi…and get some cherries before the season ends. We only have so many summers here.
xoxo
RELATED: VEGAN SALADS THAT CAN BE MADE AHEAD!
The Summer Day

Who made the world?
Who made the swan, and the black bear?
Who made the grasshopper?
This grasshopper, I mean-
the one who has flung herself out of the grass,
the one who is eating sugar out of my hand,
who is moving her jaws back and forth instead of up and down-
who is gazing around with her enormous and complicated eyes.
Now she lifts her pale forearms and thoroughly washes her face.
Now she snaps her wings open, and floats away.
I don’t know exactly what a prayer is.
I do know how to pay attention, how to fall down
into the grass, how to kneel down in the grass,
how to be idle and blessed, how to stroll through the fields,
which is what I have been doing all day.
Tell me, what else should I have done?
Doesn’t everything die at last, and too soon?
Tell me, what is it you plan to do
with your one wild and precious life?

Kale Salad with fresh cherries, black rice, Haloumi and Mint! A simple summer salad that can be made ahead!

1/2 tsp salt, more to taste and especially if not using halloumi cheese. 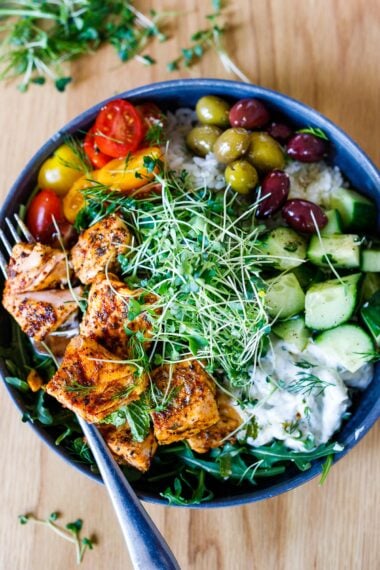 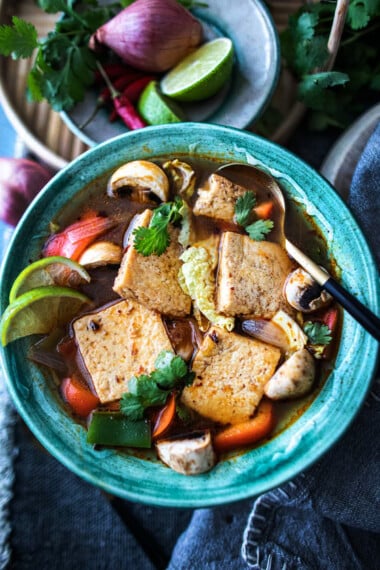 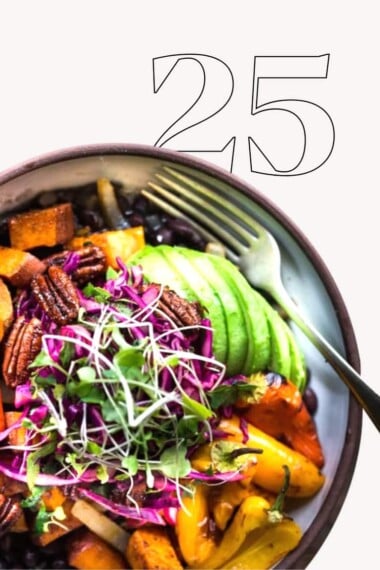 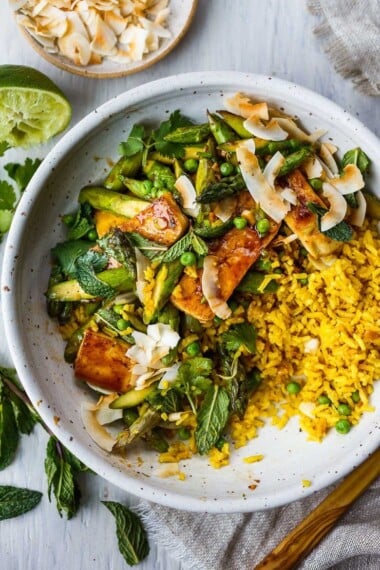 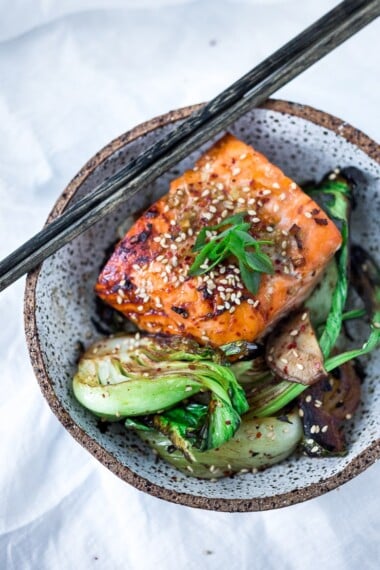 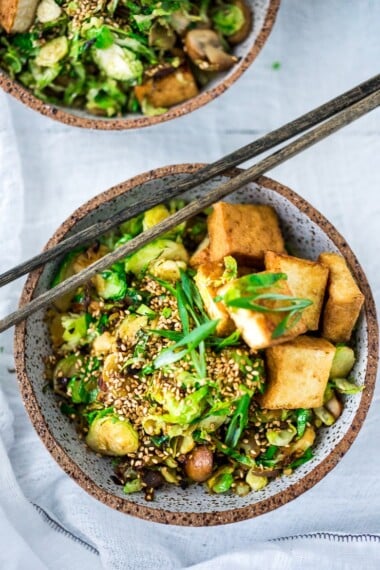 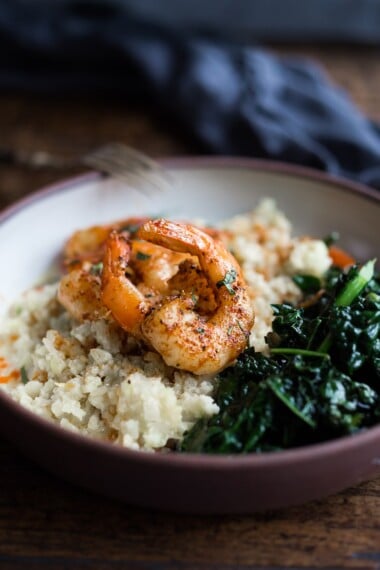