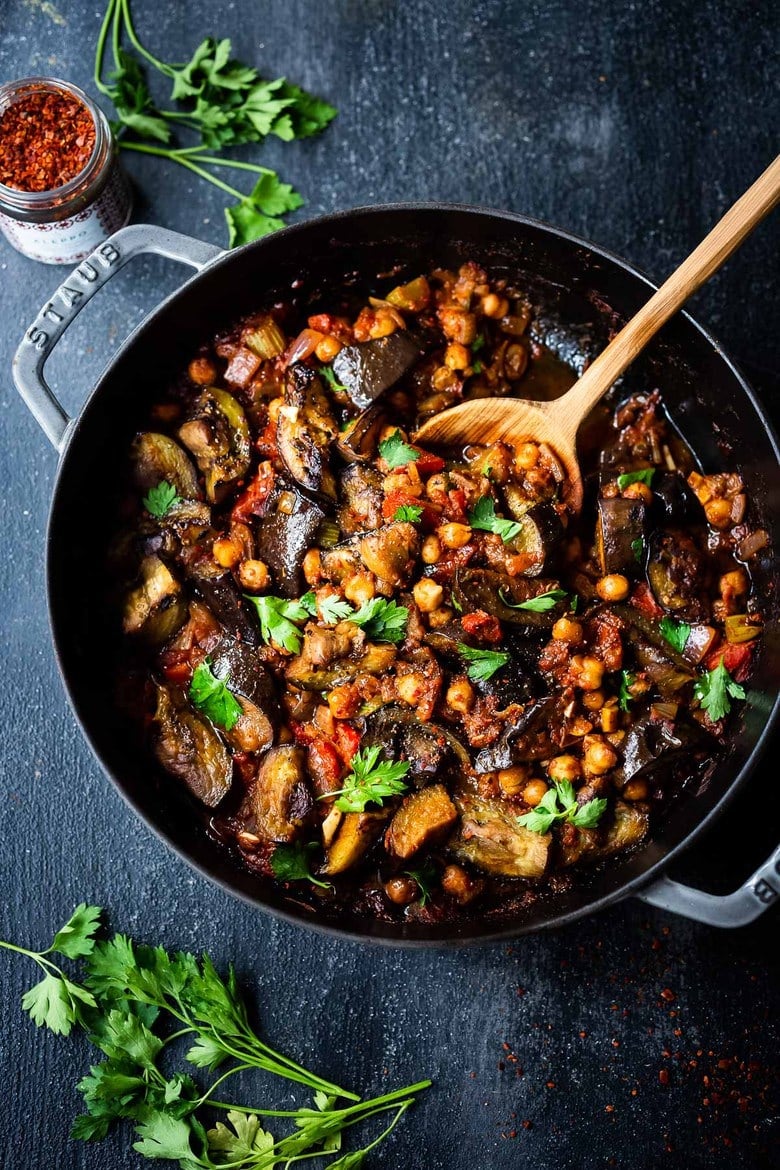 This flavorful Moroccan Stew or “Tagine” is made with chickpeas, caramelized eggplant, and a fragrant Moroccan spice blend called Ras El Hanout. It’s luscious and hearty yet totally plant-based and vegan. It can be made ahead, as leftovers get even more flavorful as the flavors have time to meld.

What is a tagine?

A tagine can either refer to a traditional clay cooking vessel with a hooded lid,  or a slow-cooked stew typically from Morocco and other North African countries like Algeria and Egypt.

Can you make a tagine, without a tagine?

Yes, you can make a tagine (a slow-cooked stew) without the clay vessel, using a dutch oven, or another ovenproof, lidded baking dish.

This vegan tagine recipe starts with cutting and salting the eggplant. Eggplant is so meaty and filling here, you really won’t miss the meat at all. 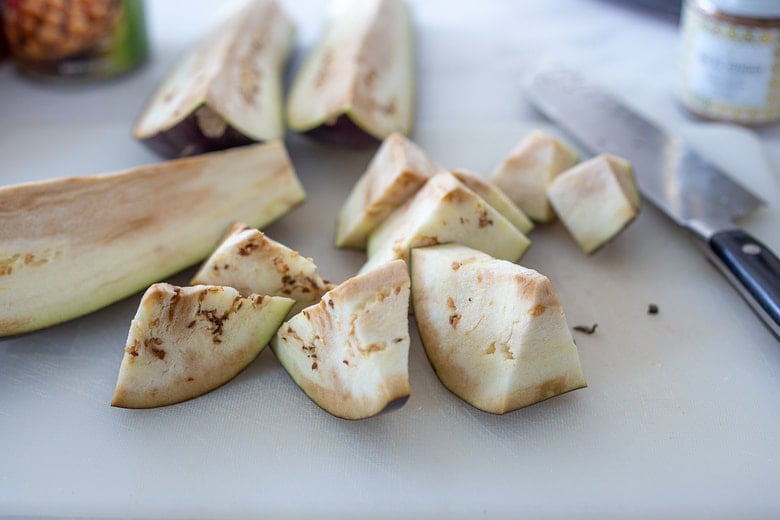 Cut the eggplant into large triangular wedges. Place in a bowl of salted water and place a lid over top to keep them submerged for 20 minutes.

Salting the eggplant will not only help remove bitterness but will also prevent the eggplant from soaking up too much oil. 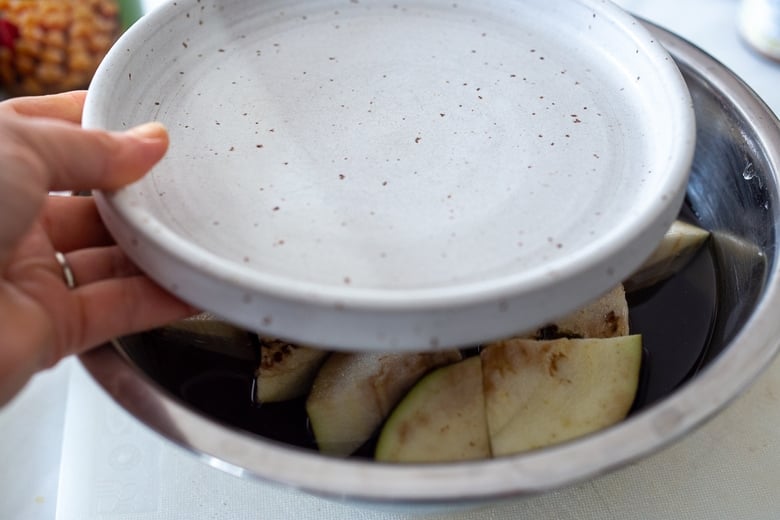 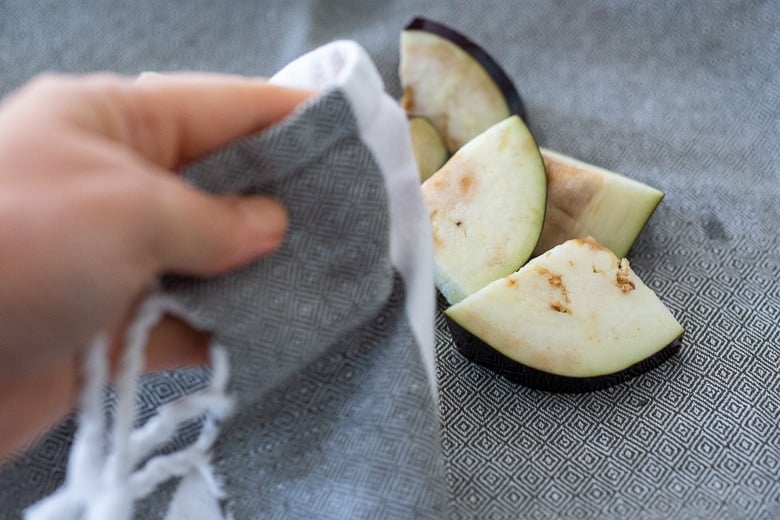 Working in batches, sear two sides of the eggplant until deeply golden. 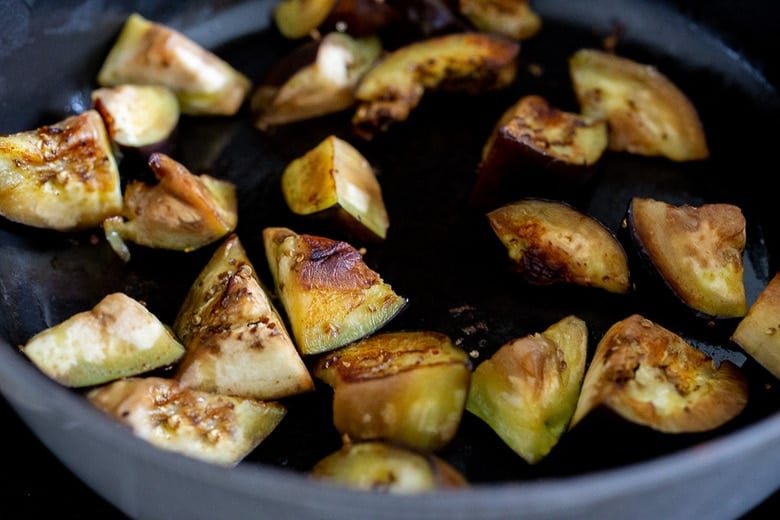 No need to cook the eggplant all the way through here as it will cook through in the oven.  Set these aside. 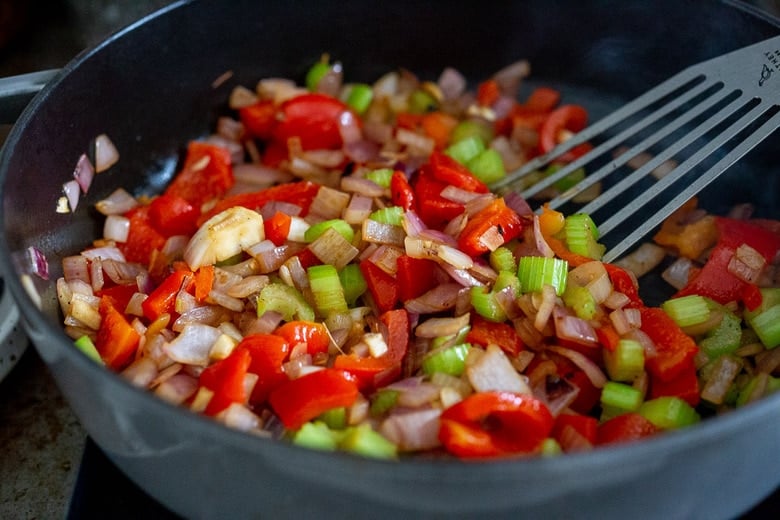 To the same pan, saute the onion, garlic, bell pepper, celery for the flavorful base of the stew. 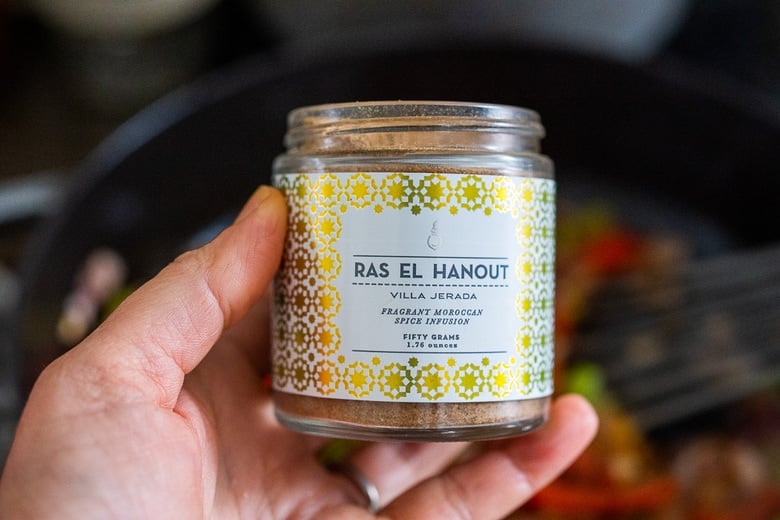 Season with Ras El Hanout. You can buy this flavorful Ras el Hanout, or make this version at home. 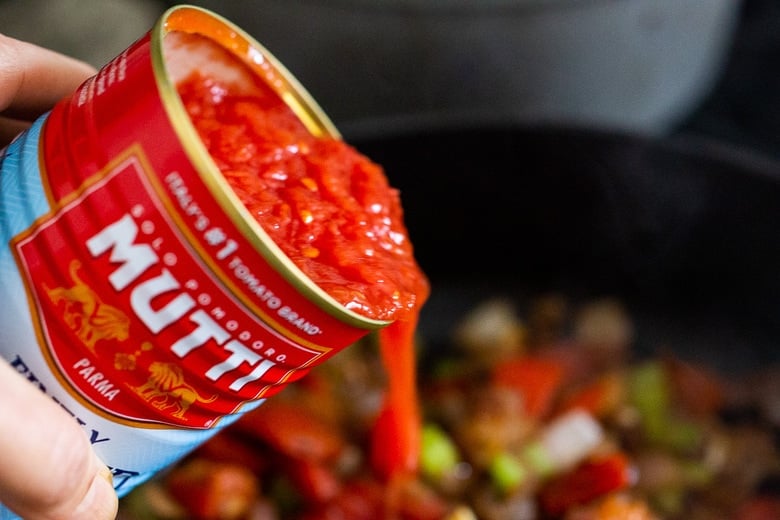 Let the tomatoes cook down. 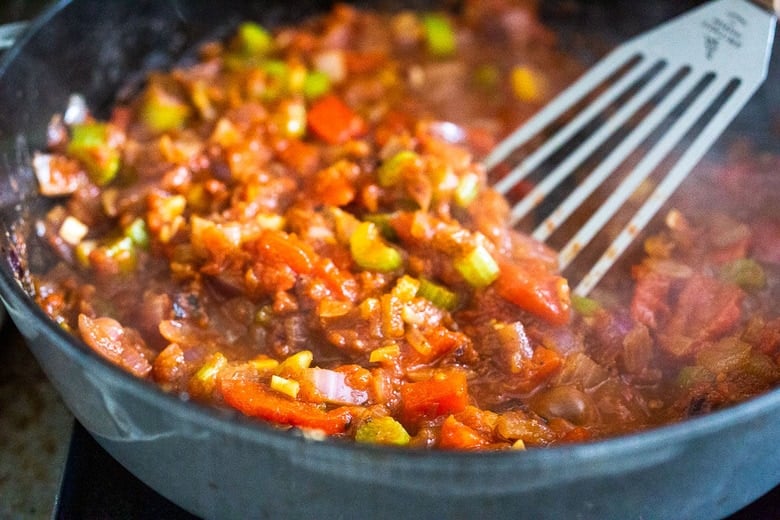 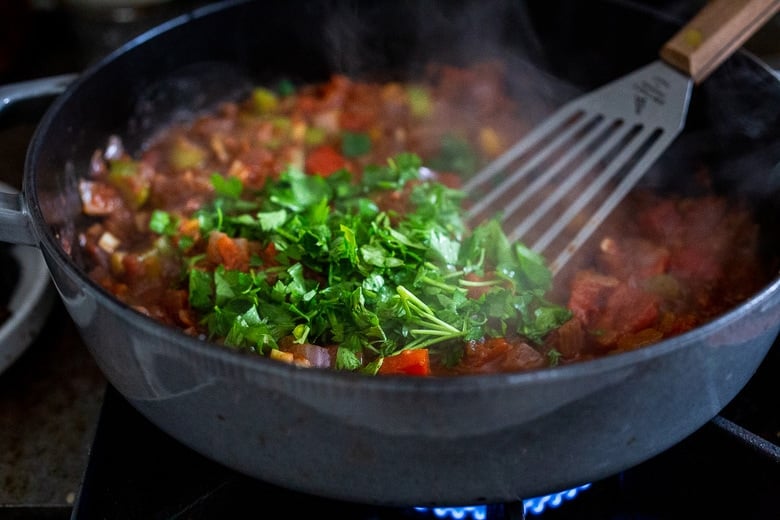 Stir in raisins, which will give the stew a very subtle but lovely sweetness. Chopped dried apricots will work too. 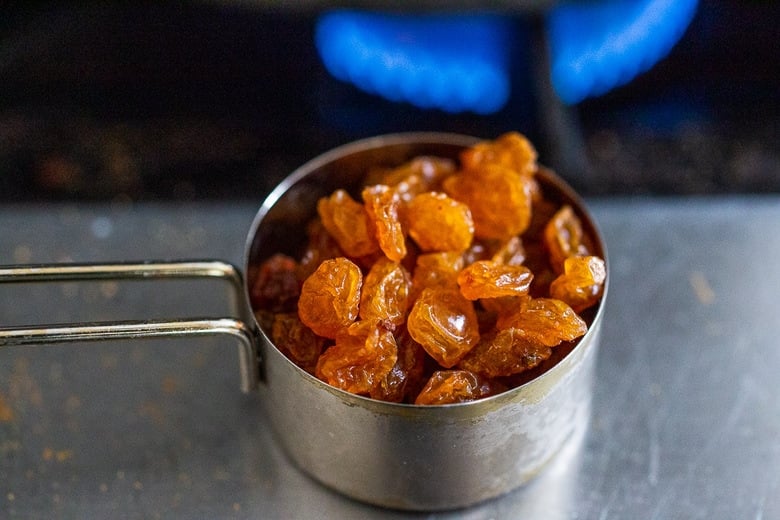 Stir in the canned chickpeas. 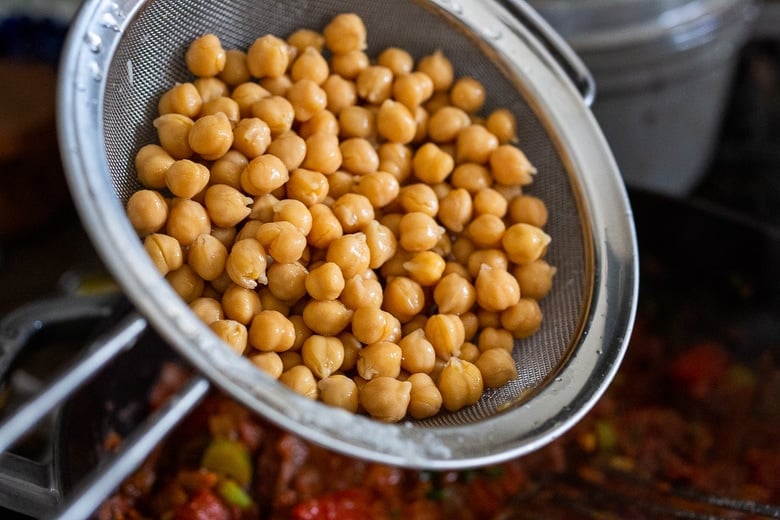 Add the seared eggplant into the stew. 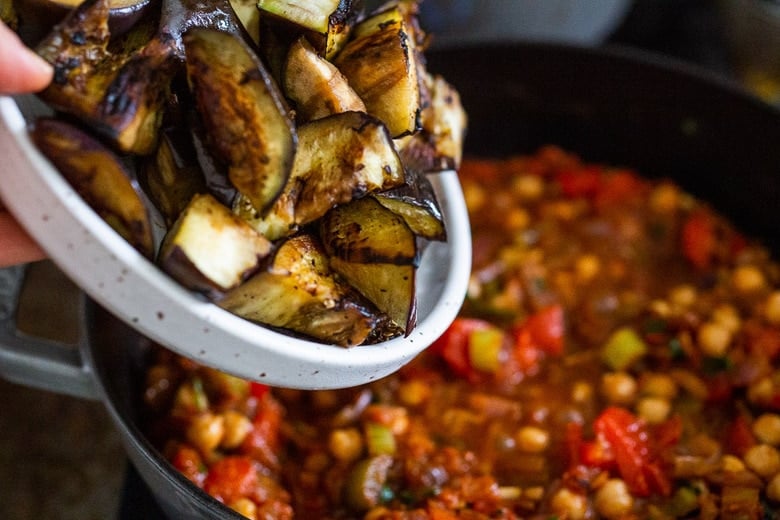 Nestle in the eggplant into the stew and cover. 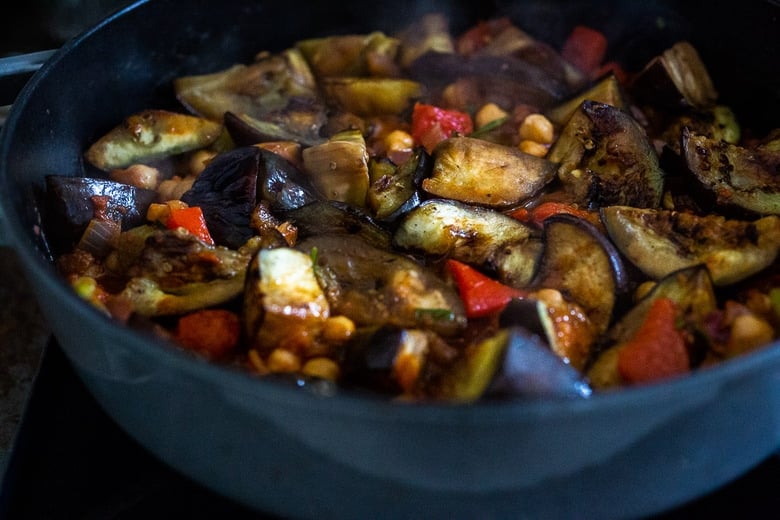 Place this in the oven until the eggplant is translucent and cooked through, about 25 minutes. 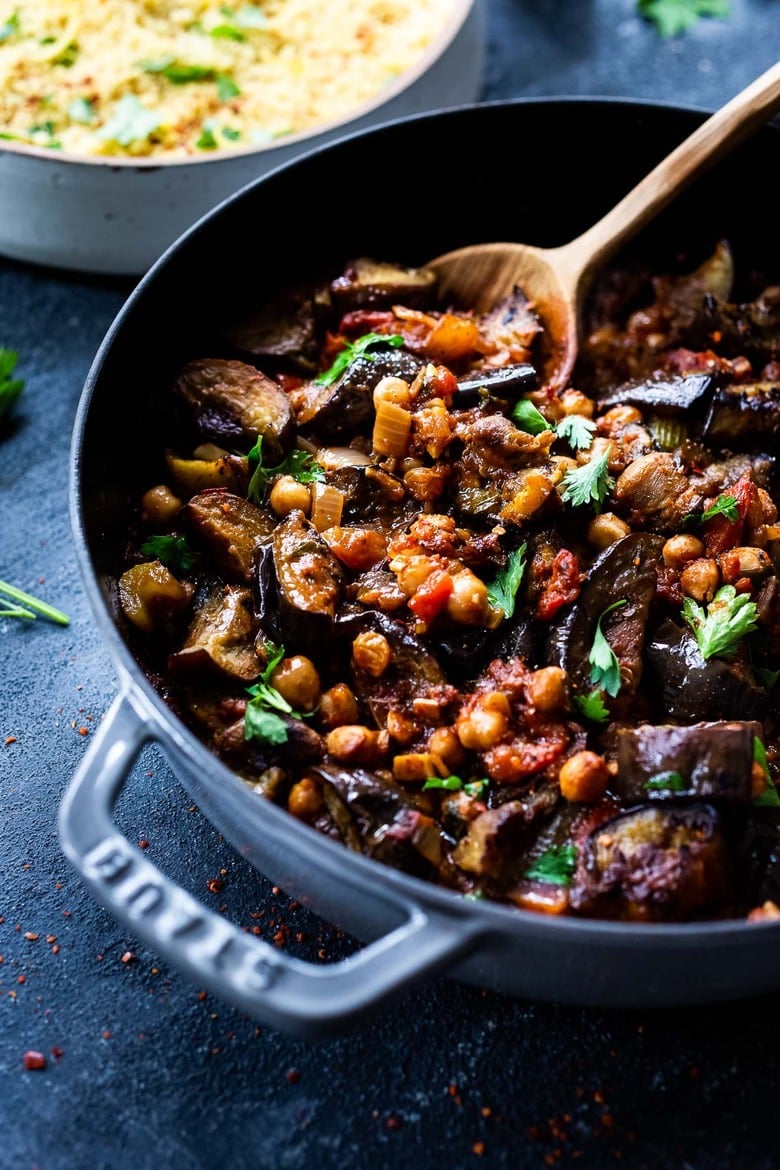 Give a gentle stir, taste and adjust seasonings and salt to your liking. You want the stew generously seasoned as it will be served over couscous, mellowing out the flavors. Sometimes I’ll add a little more Ras El Hanout.

***Keep in mind, Ras El Hanout is a spice blend– so every version is different. Start conservatively and add more to taste.

Drizzle with olive oil, sprinkle with fresh herbs and serve with couscous! 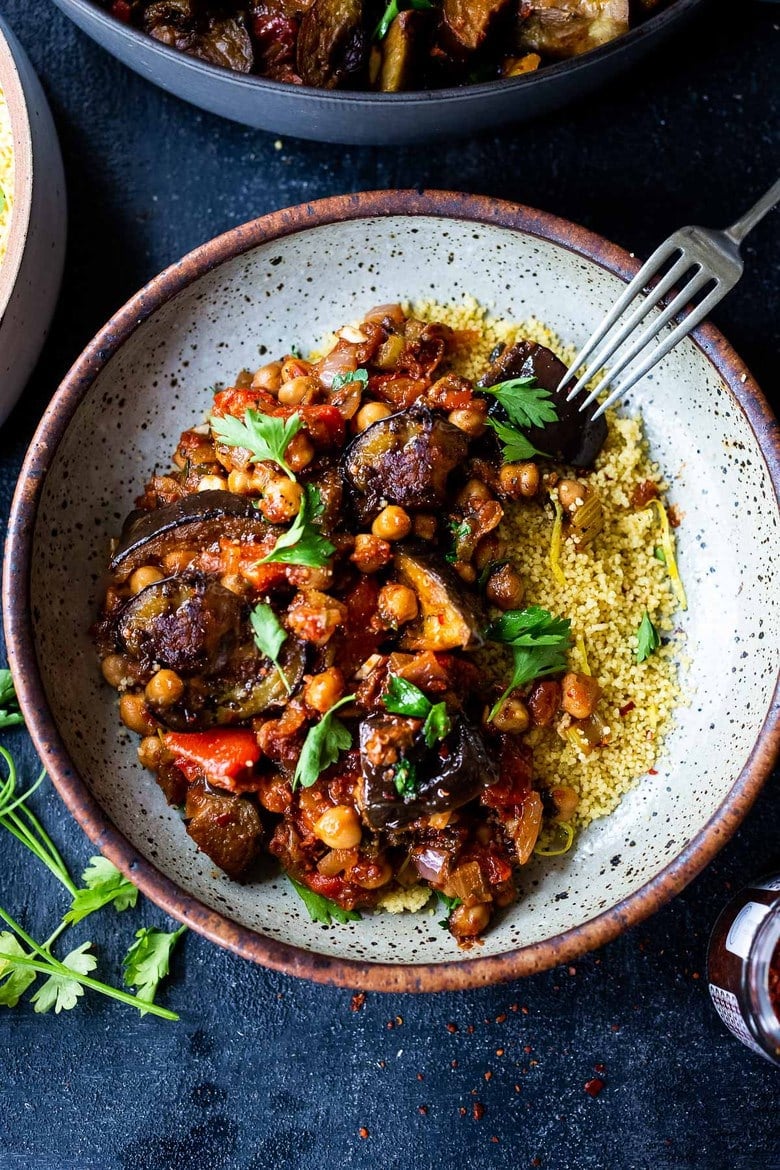 On the Homefront: We made it safe and sound to our Airbnb in the lovely little town of Encinitas. We brought our cat Bell, my sourdough starter (named Vita), and a flat of microgreens. All survived relatively unscathed.

On the long drive down, I listened to a few podcasts that may resonate. Everyday Wellness Podcast #131 with Dr. Cate Shanahan, Found My Fitness Podcast with Dr. Jed Fahey on Sulforaphane (the inspiration for the microgreens post), and this interview with James Hollis on Insights at the Edge on “finding meaning vs. happiness”.

The days are longer and warmer here and we’ve been hiking and biking and getting our feet in the sand. We watched the big red sun dip into the ocean last night, and felt the magnitude of that endless horizon, so open and spacious, like an invitation…

Hope you enjoy this decadent, Moroccan Tagine with Eggplant and Chickpeas!  It’s healthy, vegan, and bursting with Moroccan flavors.

PREP EGGPLANT: Quarter the eggplant, and cut into large chunks (1 1/2 inches at widest part). Place in a big bowl, cover with cool water just to enough to cover,  and stir in the salt. Place a plate over top to keep the eggplant submerged 20 minutes. Drain and pat dry. (Don’t rinse.)

Preheat the oven to 375F

Pan Sear: In a large dutch oven, or ovenproof skillet, over medium-high heat, heat 2 tablespoons oil. Working in 2 batches, brown two sides of the eggplant, until golden, then set these aside. No need to cook through.

Nestle in the eggplant and give the pan a good shake so the stew levels. It should be like a stew-like. If it seems dry, add a little water. Drizzle with a little olive oil, cover tightly and place in the warm oven.

Bake 20-25 minutes or until eggplant is tender and cooked through. While it’s baking make the couscous.

Remove the lid, taste adding more salt to taste, keeping in mind the couscous will soak up some of the salt. If you feel the stew needs more flavor overall, add a little more ras el hanout, a 1/2 teaspoon at a time, tasting as you go. If it seems watery, bake uncovered for a few minutes. If dry, add a little water. To serve, Sprinkle with optional  Aleppo chili flakes and fresh Parsley. I like adding an additional drizzle of olive oil, or a dollop of yogurt, up to you.

Serve with the cinnamon-scented couscous.

To make couscous: Place broth, oil, spices and salt in a medium pot, and bring to boil. Stir in couscous. Cover and remove from heat. Let stand 7 minutes. Uncover and fluff with fork. Adjust salt.

Soaking the eggplant, not only seasons it, it helps remove some bitterness and helps the eggplant absorb less oil. Don’t skip this step.

You can make your own Ras El Hanout here.

If leaving the raisins and apricots out, you will need to add a little sweetness- honey, sugar, something, to taste.  1-3 teaspoons.

Feel free to cook and bake in a tagine – if using a brand new tagine, make doubly sure you soak it first.