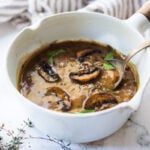 A simple recipe for Mushroom Gravy! Delicious and Flavorful with depth and complexity, use this on mashed potatoes, biscuits or stuffing. Vegan and GF adaptable!

Place broth and water in a small pot and bring to a simmer, then stir in miso until disolved.

At the same time, heat butter ( or oil)  in a large skillet and saute mushrooms and shallot over med-high heat. Saute 7-8 minutes, lowering heat if necessary, stirring occasionally, until mushrooms have fully released their liquid and all this liquid has cooked off.

Sprinkle the flour over top and stir to combine, cooking and stirring the flour 2 minutes, letting it brown a bit. Here is where the flavor is!

Add 1/2 of the hot broth, whisking and scraping all those flavorful browned-bits. When incorporated, add the remaining broth, stirring to combine Simmer gently on med-low until reduced and thickened, about 5 minutes.  Taste for salt, adding some if needed along with pepper.

If using bouillon cubes (to make broth) go lighter than it says on the package. For example, instead of two cubes for two cups water, use 1 cube for 2 cups water.

If wanting to leave the miso out, replace it and the water with another cup of broth. Or use a tablespoon of soy sauce, or GF alternatives like Braggs or Coconut Aminos